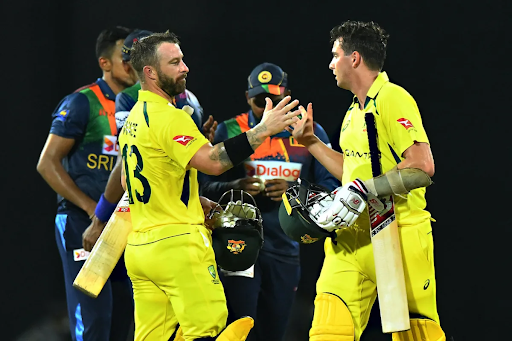 T20 World Champions Australia continued their dominant run on the tour of Sri Lanka, putting up a strong fight in a low-scoring second T20I of the ongoing three-match series to seal the affair 2-0  on Wednesday night at the R Premadasa Stadium in Colombo.

After restricting the struggling home side to a small total of 124/9 in their 20 overs, Australia batsmen flopped with the bat and suffered a real scare of losing the game to a side which is far inferior to them in terms of quality and talent, but yet enjoyed the home conditions and support from their passionate fans to a large extent.

If the right-arm T20 master Josh Hazlewood was once again on the top of his game, returning with yet another superb bowling spell of 4-1-16-0, another right-arm T20 cricket specialist Kane Richardson was the leading wicket-taker for Australia.

While Kane Richardson took 4/30 from his 4 overs, another right-arm fast bowler who is being touted as the next big bowling star across formats for Australia, Jhye Richardson took 3/26 from his 4 overs. All-rounder Glenn Maxwell was impressive with the ball as well, returning with 3-0-18-2 as the visitors made the most of the conditions and took advantage in the first half of the game.

The island nation was bolstered by important contributions from their left-handed aggressive batsman Charith Asalanka, who struck 2 sixes and as many fours to make 39 from 33 balls. He was well supported and followed by the right-handed batting mainstay Kusal Mendis, who managed a run-a-ball 36 with 2 fours and 1 six.

In their reply, Australia started off positively but lost their way in the middle. Their embattled captain Aaron Finch scored a 13-ball 24  with 4 fours while David Warner struck 3 fours and 1 six to make 21 from 10 balls.

The visiting side was rocked by plenty of wickets in the middle overs as Mitchell Marsh fell for 11 against Wanindu Hasaranga, and Steve Smith managed 5 before the Sri Lankan spin bowling all-rounder trapped him leg-before.

Glenn Maxwell tried to weather the storm with a run-a-ball 19 but Marcus Stoinis failed to trouble the scorers, falling for a 7-ball 9 as Australia continued to slip.

However, their dependable and experienced campaigner in Matthew Wade came to the rescue late in the innings, scoring 26 from as many balls with just 2 fours to finish the game in the company of Jhye Richardson, who displayed immense patience and discipline to make a 20-ball 9 not out.

Wanindu Hasaranga returned with 4-0-33-4 whereas Dushmantha Chameera and Nuwan Thushara took one wicket apiece. The third and final T20I will now be played on Saturday, June 11 at Pallekele, which is also the venue for the first two ODIs of the upcoming three-match series between these two teams.