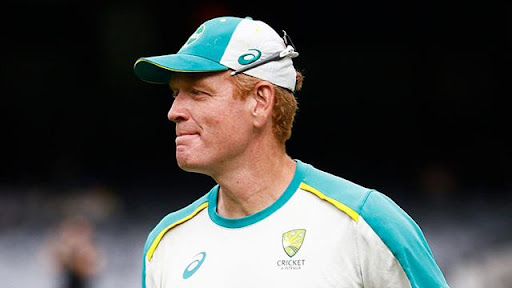 “There have been a lot of other things discussed rather than the high skill and temperament with what he went about in that innings,” says Andrew McDonald

Australian interim coach Andrew McDonald said that Pakistan skipper Babar Azam denied his side a clear victory after playing a historic 196-run knock in the second Test played at Karachi.

Australian interim coach Andrew McDonald was all with the praises after Pakistan skipper Babar Azam denied his side a clear victory after playing a historic 196-run knock in the second Test played at Karachi.

After being given to bat for almost 2 days with a score of 506 runs, the odds were against Pakistan but they fought well against Australia to deny them a victory.

During this battle against Australia, Babar also managed to score the highest runs ever by a captain in the second innings of the Test match.

“An incredible knock and I am glad he brought that up. There have been a lot of other things discussed rather than the high skill and temperament with what he went about in that innings. There was a spin on that wicket, he was able to navigate through that and it was quite amazing. You have to factor in that it was a drawn Test, in terms of saving the Test it is right up there in what I have seen,”

said McDonald while replying to a query during an interaction.

“It was the best by a captain in the fourth innings. An incredible feat denied us a victory but full credit to the way he played,”

The three-match historic Test series between Pakistan and Australia is still standing at 0-0 with the final match and the decider to be played at Qaddafi Stadium Lahore on March 21, which will be broadcasted on the Sony Sports Network in India.

Meanwhile, the Australian pacer Mitch Starc did not have a decent year behind as he faced severe critics for his below-par performances but he answered all the critics in style with a brilliant Ashes performance and then bowling a fantastic spell in the first innings of the second Test against Pakistan in Karachi.

“What Starc did in the Ashes was outstanding. The way he bowled on Day 3 of the second Test opened the game up. Mitchell Starc was a big factor in terms of getting reverse swing. Not sure he had too much to answer, his performances lately probably say enough,”