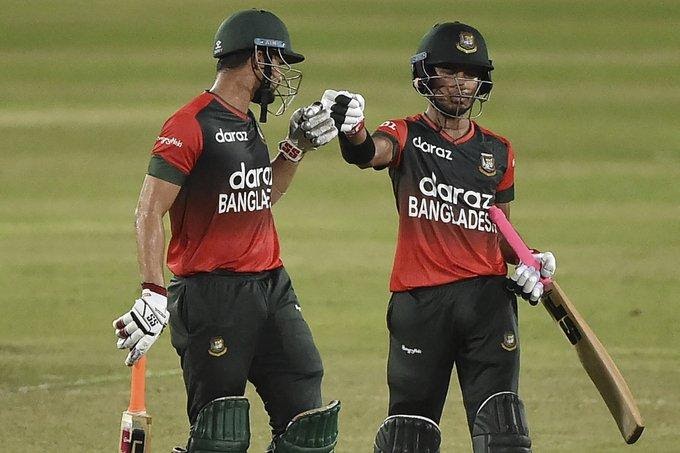 Clinical Bangladesh triumph over mighty Australia in the second consecutive T20I to take the series lead by 2-0 at Sher e Bangla stadium on Wednesday, August 4.

Australia had won the toss and decided to bat first. Australia started their innings a bit slow as a result the pressure went onto the batsmen and they lost their first wicket on the third over of the innings. After the first wicket, Mitchell Marsh came to bat.

Marsh and Josh Philippe both tried to stay on the pitch and wanted to stand a great partnership but couldn’t do that after Philippe lost his wicket off Mustafizur Rahman’s first over.

Marsh, on the other hand, played a couple of fine shots to get the scorecard moving. On the other end, his partner Moises Henriques was also playing sensibly.

Australia needed a good pair of batsmen in that situation and both of them were doing a great deal with boundaries at regular intervals to keep the runs flow speedily. By their partnership, Australia was looking to score a decent total.

But their partnership breaks down when Shakib al Hasan took the wicket of Henriques and provides a great breakthrough for his team and sent him to the pavilion.

After that, Marsh plays a short-pitched ball lately to give an inside edge off his bat, the ball goes directly to the wicketkeeper’s hand and he loses the wicket.

Next came the skipper, Mathew Wade but he immediately bowled himself into stumps in a creative way, off Mustafizur. On the very next delivery, Mustafizur took another wicket to reach on hat trick which he, unfortunately, couldn’t complete.

Australia keeps losing wickets one after other as their batsman was in a hurry to go back to the dugout and couldn’t provide delightful innings for their team.

The match was handed to the Australian bowlers in a do-or-die situation but Mitchel Starc took the first wicket on the third over of the innings to set out Soumya Sarkar to the pavilion.

After one down, the most experienced in the side, Shakib came into bat with a clear aggressive mindset which he showed by putting three consecutively boundaries on the same over of the Starc.

On the other end, Mohammad Naim failed to go on with the job as he was bowled by Josh Hazlewood. After the powerplay, Shakib got a new life when agar appeals for LBW, and the umpire stands his finger for out but Shakib took the review and the ball was missing the stumps.

Shakib did not use the second chance as Andrew Tye came to deliver his first over and sent him to the pavilion.

Australia gave a strong comeback as a unit to tear down Bangladesh’s middle-order to get their way back in the contest.

After 10 overs, Bangladesh had set a score of 60-4 to enter the match in a very critical situation.

Adam Zampa came to bowl in the 12th over of the innings and took the wicket to further dig Bangladesh’s batting line-up.

Thanks to Afif Hossain and Nurul who added a solid partnership to get their side across the line. Both players finished the match with 8 balls and 5 wickets in hand.

Bangladesh triumph Australia in the 2nd T20 to take a 2-0 lead in the 5 matches series.

“It’s very pleasing to see Afif and Sohan stand up, carry us to the end. Showed maturity. And upfront, our bowlers did very well to restrict them to 120. But Shakib was very important with bowling and batting, which shows how important he is to the team. Losing few early wickets causing tension in the dressing room, but the way Afif and Sohan (Nurul batted), was a lot of relief. I think Mustafizur has always been there in these conditions, and effective too. Shoriful bowled really well and all the bowlers chipped in too. We are taking it game by game.”

“When I came, I thought I have to stay in the wicket till the end. Whatever the required rate maybe, I knew I could manage. We knew we had to stay calm, keep wickets in hand. Sohan (Nurul) Bhai played well so there was no pressure on me either.”

said Afif, player of the match.