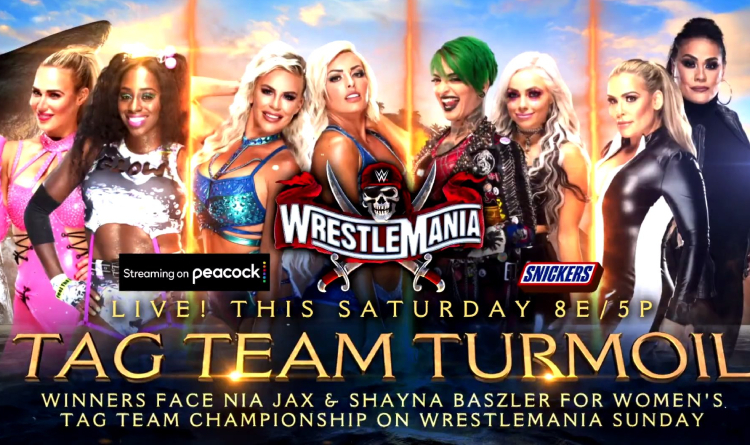 The WrestleMania 37 Night 1 fight card will feature a Tag Team Turmoil match. The contest is scheduled on April 10.

WWE announced that 4 teams would collide in the ring:

The ladies are to fight for the right to challenge current WWE Women’s Tag Team champions Nia Jax and Shayna Baszler on Night 2 on April 11. A tag team turmoil is a type of an elimination bout. According to the rules, 2 parties open the clash. When a team gets defeated, another one takes its place. The last contestants standing in the ring are declared the winners.

Jax and Baszler faced a newly formed alliance of Asuka and Rhea Ripley in a non-tile clash at WWE Raw on April 5. Shayna and Asuka opened the bout. Asuka took her opponent down and went for an arm lock. But Nia attacked her to save Baszler. Asuka answered with Code Breaker and tagged Ripley in. Rhea knocked Jax off the apron. However, Reginald was on time to distract her, and Nia took Ripley down with a chop block.

The champions isolated Rhea in the ring, but she scored a hot tag. Asuka beat both rivals up and climbed to the top turnbuckle. Nevertheless, Ripley pushed her off the ropes, smashed Asuka’s face into the canvas and threw her back into the ring. Baszler hit Asuka with a running knee and scored victory by pinfall. Following the loss, Rhea gloated at unconscious Asuka and claimed that she would take the WWE Raw belt away from her at WrestleMania 37.