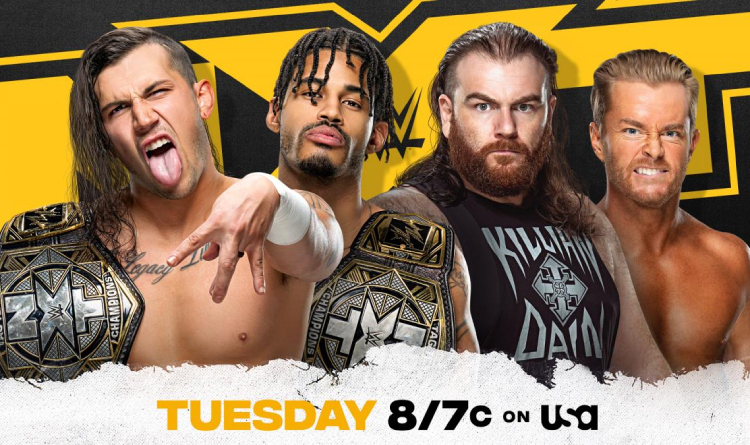 MSK to take on Lee & Carter

MSK, composed of Wes Lee and Nash Carter, is scheduled to defend the NXT Tag Team belts for the first time against Killian Dain and Drake Maverick at WWE NXT on April 13.

Dain and Maverick got title shot following the victory over Breezango

MSK signed with WWE last year and made great advances in the 2021 season. The wrestlers took part in the Dusty Rhodes Tag Team Classic tournament. They beat Jake Atlas & Isaiah Scott in the first round, defeated Maverick & Dain in a quarterfinal match and overpowered Legado del Fantasma in a semifinal. Lee and Carter took on former NXT UK Tag Team champions Grizzled Young Veterans in the final contest. They pinned their rivals down in a grueling clash and won the competition.

Dain joined forces with Maverick in September 2020. The athletes challenged Burch and Lorcan for the NXT Tag Team crowns in December but lost by pinfall. Killian and Drake defeated August Grey and Curt Stallion in the first round of the Dusty Rhodes Tag Team Classic. However, they dropped a pinfall to MSK in a quarterfinal. In their last contest at NXT Takeover: Stand & Deliver, Dain and Maverick scored victory over Breezeango and earned a title shot against MSK. According to WWE NXT, Killian and Drake will face the title-holders at NXT on April 13.