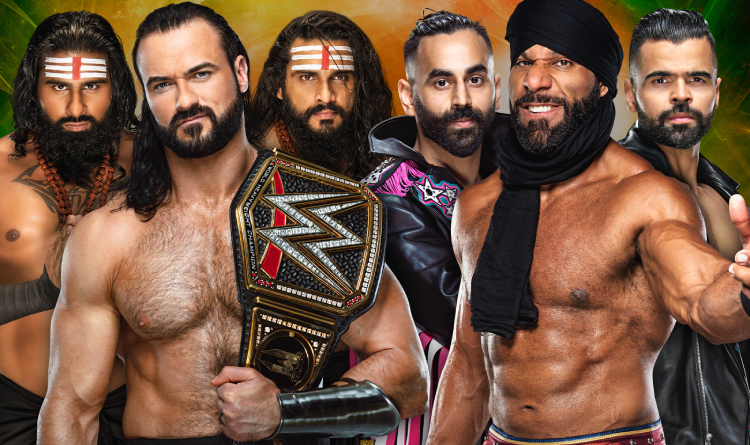 WWE champion Drew McIntyre will join forces with Indus Sher to fight against an alliance of Jinder Mahal and The Bollywood Boyz at Superstar Spectacle on January 26.

WWE announced that a Six-Man Tag Team match McIntyre & Indus Sher vs Mahal & Bollywood Boyz is set to headline Superstar Spectacle. Indus Sher is the first Indian tag-team at WWE, founded in 2020. It is composed of heavyweights Rinku Singh and Saurav Gurjar. They made their debut at WWE NXT in March last year by challenging SmackDown contestant Matt Riddle.

Former WWE champion and one of the most famous Indian wrestlers Jinder Mahal decided to join forces with a renowned team Bollywood Boyz, composed of brothers Gurvinder and Harvinder Sihra. They debuted in 2017 and won the WWE 24/7 Championship 9 times. In 2020, Mahal fought only once due to a knee injury. He beat Akira Tozawai in April and underwent a surgery.

Charlotte Flair united with Sareena Sandhu to take on Bayley and Natalya in a Women’s Tag Team match at Superstar Spectacle. Flair and her partner Asuka defeated Nia Jax and Shayna Baszler in 2020 and became Women’s Triple Crown and Grand Slam champions. Sandhu began her professional wrestling career in 2017 and compiled a record of 8-4.

Bayley started competing in WWE in 2012 and earned multiple regalia. For instance, she is the first Women’s Triple Crown and Grand Slam champion. Natalya is also an eminent wrestler. She signed with WWE in 2007 and won the Divas and SmackDown championships.