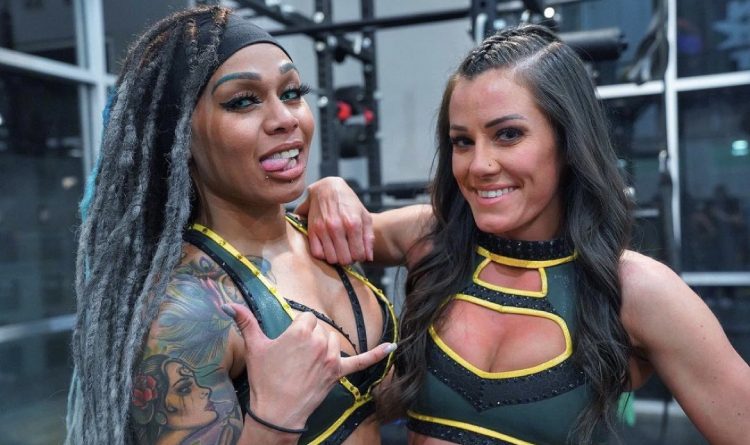 Catanzaro and Carter celebrate victory over Storm and Martinez

Catanzaro & Carter is the first team to qualify for semifinals

Kacy and Kayden were sizable underdogs. However, they pulled one of the greatest upsets in NXT history. In the first round of the clash, Carter tagged Catanzaro and slammed Martinez. After the break, Storm managed to control Kacy and tagged Martinez. However, Carter intervened and turned the tide of the battle in her favor. She landed several dropkicks and threw Storm out of the ring. As a result, Catanzaro took to the sky for the twisting splash and won the contest.

Catanzaro & Carter reached the semifinals. According to the Women’s Dusty Classic bracket, they will face the winners of Aliyah & Jessi Kamea vs Dakota Kai & Raquel Gonzalez showdown.

American singer and actor Garrick Morgan believes that Shotzi Blackheart and Ember Moon will win the Dusty Rhodes Cup. In his opinion, Catanzaro and Carter are poised to lose in the semifinals. Therefore, Blackheart & Moon will likely take on Dakota Kai & Raquel Gonzalez in the final match.

WWE NXT also featured 2 clashes in the first round of the Men’s Dusty Classic. Kushida & Leon Ruff defeated Johnny Gargano & Austin Theory and advanced to quarterfinals, where they are set to fight against Grizzled Young Veterans. Lucha House Party won in a contest against Imperium. Gran Metalik and Lince Dorado are looking forward to taking on Legado del Fantasma composed of Joaquin Wilde and Raul Mendoza.