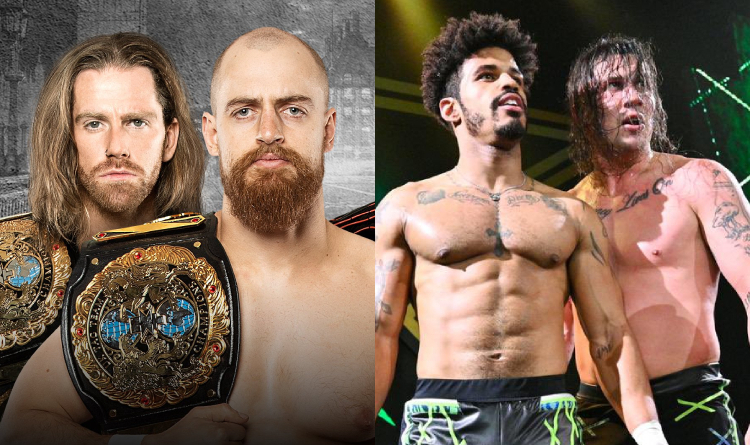 MSK and GYV won in quarterfinals

GYV composed of James Drake and Zack Gibson faced Kushida and Leon Ruff. Kushida dominated at the beginning of the contest, and Ruff was close to scoring victory with a senton bomb. However, Drake rescued his teammate, pinned Leon with a Ticket to Mayhem and won the showdown. GYV fights against winners of The Undisputed Era vs Tommaso Ciampa & Timothy Thatcher clash in the semifinal.

MSK took on Drake Maverick and Killian Dain in a quarterfinal match. Nash Carter and Wes Lee stick to a strategy of quick tags, showing lightning speed and mastery. Dain tried to use Maverick as a weapon and almost stacked Lee up, but Carter tagged in and scored victory by pinfall. As a result, MSK has reached semifinals and will meet victors of Lucha House Party vs Legado del Fantasma fight.

The event also featured a Women’s Dusty Classic bout between Dakota Kai & Raquel Gonzalez vs Aliyah & Jessi Kamea. Jessi took a hard beating, and Aliyah intervened to save her partner. Nevertheless, Gonzalez planted Kamea with a single-arm powerbomb and secured a victory. Dakota and Raquel are set to face Kacy Catanzaro and Kayden Carter in a semifinal match.

WWE NXT plans to hold the two remaining quarterfinal clashes on February 3. Last year, GYV reached the final. They definitely have a chance to repeat or even surpass this achievement in 2021. Nevertheless, GYV has to get the win over Cole and Strong, who look fantastic this season.