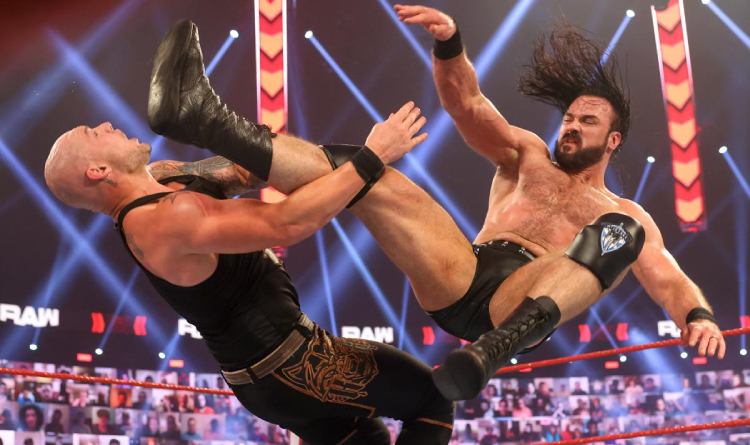 Ex-WWE champion Drew McIntyre took on Baron Corbin and stopped his rival with a Claymore kick in a grueling clash at WWE Raw on April 5.

Corbin initiated wrestling exchanges and caught his opponent in a waistlock at the beginning of the contest. The Scottish Warrior broke free but absorbed a shoulder strike and dropped to the canvas. After Drew had got back to his feet, Baron took McIntyre down with a clothesline and began choking him against the rope. However, the referee made the athletes stand up.

McIntyre ramped up the pace to turn the tables in his favor. He performed a huge overhead belly-to-belly suplex and threw Corbin into the steps. Baron withstood the onslaughts, tossed The Scottish Warrior into the ring post and landed a suplex for a near-fall. Nevertheless, McIntyre took the initiative and finished Corbin  with a Claymore shot.

Drew lost the WWE belt to The Miz this February. Afterwards, he scored 7 victories in a row and got a ticket to WrestleMania 37. He is set to face current WWE champion Bobby Lashley in the Night 1 co-main event on April 10. Bobby dethroned The Miz in a lumberjack bout on March 1.

Lashley also had a singles match ahead of his title defence at Monday Raw. Bobby fought against his former Hurt Business teammate Cedric Alexander. Cedric took a hard beating in the corner but sent The All Mighty over the ropes and hit a couple of suicide dives. When the athletes got back to the battlefield, Lashley applied The Hurt Lock until Alexander passed out and secured the win by submission.