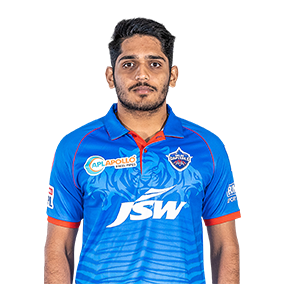 Tushar Deshpande is an upcoming talent who has taken the domestic cricketing world by storm with his
ability to take the wickets at the crucial moment of the game. He was born in Mumbai and attracted the
selector’s eyes by taking 21 wickets in just four matches of Cooch Behar Trophy.
After that, he made his first-class debut for Mumbai in the 2016-17 Ranji Trophy. He is a right-arm pacer
and has taken 51 wickets in 22 matches across formats in the 2018-19 domestic season. In fact, he was
the reason for Mumbai’s win in Vijay Hazare with 15 wickets. He secured his place in the India Blue
team’s squad for the 2019-20 Duleep Trophy by giving his best performances in various matches.
For Indian Premier League 2020, Delhi Capitals picked Tushar for his base price of INR 20 lakhs. As it is
the first season for the young pacer, he will probably get a little chance against experienced players like
Kagiso Rabada and Ishant Sharma but can learn a lot in the DC camp.
Tushar was born on 15 May 1995 in Mumbai, Maharashtra. In a recent interview, he expressed that he
gets inspired by South African legend pacer Dale Steyn.