The legendary tennis player Prajnesh Gunneswaran and his incredible story 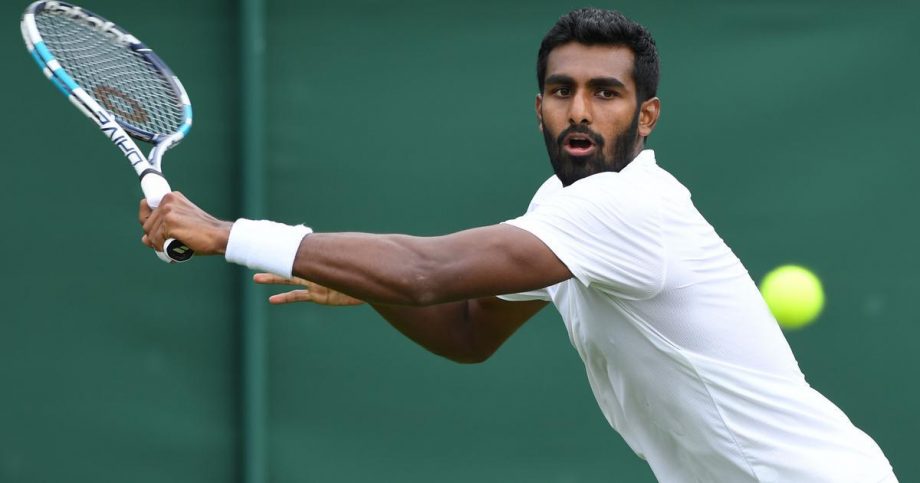 Prajnesh Gunneswaran during the match

Next to cricket, football, and hockey, tennis is one of the most beloved sports among Indians. Even though there are few tournaments in India, the country boasts of its legendary athletes who have surprised the audience repeatedly throughout their careers.

So, have you heard anything about an Indian tennis player Prajnesh Gunneswaran? We’re sure you have. The man has won two ATP Challenger tournaments, eight ITF Futures singles tournaments, one ITF Futures doubles tournament, and the Indian Davis Cup team. However, let’s not get ahead of ourselves.

Here is a stunning life story of Prajnesh, which is sure to win your heart. His family, childhood, tennis career, and much more are all found below in our article.

The Hindu was born on November 12, 1989, in Chennai to Mr. Prabhakaran and Mrs. Usha. He started playing tennis at the age of 5. Prajnesh’s favourite shot is forehand, the surface is hard, and the tournament is Los Cabos.

By the way, the Cabo San Lucas Open is an international men’s professional tennis tournament held in Cabo San Lucas, Mexico, on open hard courts. The tournament falls into the ATP 250 category with prize money of around $859,000 and a tournament grid for 28 singles and 16 doubles players.

Speaking of Prajnesh’s own family already, he married Sudarshan Pai in Ernakulam, Kerala, in 2019. He is now happily married, and one can surely expect a new addition to his and his wife’s family soon.

In his early years, Gunneswaran mainly competed in ITF and ATP Challenger events. Though he won 8 ITF Futures singles titles, he had limited success on the Challenger tour.

Gunneswaran made his Davis Cup debut for India against Uzbekistan in April 2017.

At the French Open, Gunneswaran lost in the final qualifying round. Although he was selected as a lucky loser after Nick Kyrgios withdrew, Gunneswaran couldn’t compete in the main draw. He had already left Paris before Kyrgios announced his withdrawal, thus not making his debut in the Grand Slam main event.

In August, he got the bronze medal in the men’s singles tennis event at Jakarta’s 2018 Asian Games. He became the sixth Indian male athlete to win an award in tennis at the Asian Games.

Gunneswaran started the season by taking part in the Maharashtra Open, where he received a wild card to the main draw. There, he lost in the first round to Michael Mmo in two sets.

At the Australian Open, he won the qualifiers and made his debut in the Grand Slam tournament’s main draw, also losing in the first round in sets to Frances Tiafoe.

Gunneswaran qualified for the 2019 BNP Paribas Open and defeated Frenchman Benoit Paire in straight sets to reach the second round. He won his second-round match against 17th seed Nikoloz Basilashvili in three sets and advanced to the third round of the ATP 1000 tournament for the first time in his career. Gunneswaran’s race at the Indian Wells Masters came to an end after losing to Ivo Karlovic in the third round. It was Gunneswaran’s first appearance at an ATP Masters event. He then qualified for the Miami Open and played in the Masters’ main draw twice in a row. He lost in the first round to Jaume Munar.

In April, Gunneswaran reached his first ATP Challenger singles final of the season at the Anning Challenger. He was the reigning champion and lost in the final to Britain’s Jay Clarke. As a result, he moved up to 75th place in singles. In July, his ranking automatically qualified him for the main draw at Wimbledon, where he lost in the first round to Milos Raonic.

He also suffered a loss to Daniil Medvedev at the US Open in the 1st round.

Currently, Prajnesh Gunneswaran is ranked 128th in the ATP world rankings. Despite some injuries and problems leaving the country due to the raging pandemic, he has had an excellent start to the season after a relatively long break. It should be noted he has been able to prove himself in singles as well as doubles.

Prajnesh Gunneswaran is now looking forward to the upcoming tournaments. Of course, 2021 started badly for him as he recently crashed out of one of the Grand Slam tournaments, the Australian Open. However, he hasn’t lost faith in himself and is ready to surprise spectators throughout the year and beyond.

So can the Indian legend make it into the top 100 tennis players in the world this year? Time will tell, as the fantastic story of this Indian tennis player continues to this day. But even so, we can already say he is a legendary athlete in the country’s history. All we can do is wish Gunneswaran good health, a lot of strength and patience, and successful performances.