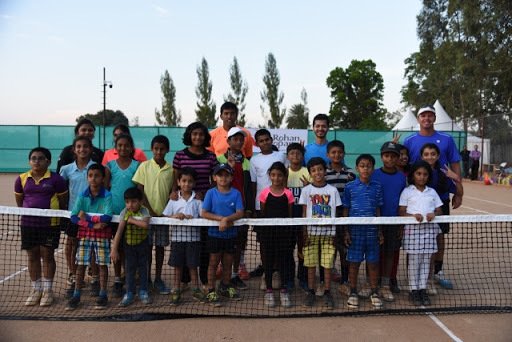 Rohan Bopanna with students and some coaches

The main goal of the Rohan Bopanna Tennis Academy in Bangalore is to develop young tennis players the way they do in countries with the best playing structure.

Rohan Bopanna is a man with a huge heart, big goals and a vision of future champions from the first step onto the court. In his 40s, he hardly thinks about his professional tennis career. As the athlete’s personal goals faded into the background, the French Open mixed doubles champion focused on the tennis academy at the sports school in Bangalore.

His main goal rests on a desire to prepare future champions who can achieve much greater results than those that Bopanna himself brought for India. And these are victories in the mixed doubles Roland Garros with Gabriela Dabrowski, the final of the 2010 US Open paired with Aisam Ul-Haq Qureshi, the Davis Cup in 2010, where the tennis player played a decisive role in India’s victory over Brazil, returning the country to the World group for the first time since 1998.

Despite the fact that today the normal and familiar life has largely gone awry due to the coronavirus, the lively training on the courts continues. When young athletes go to a picturesque sports school, all external adversity does not matter.

There are familiar faces here, such as the national champion among men Niki Poonacha and the women players Sharmada Balu and Sravya Shivani. Sharmada, in turn, is learning the art of coaching, even as she trains herself to return to her professional career. Talented young players such as Retin Pranav and Ritabrata Sarkar are highly motivated to train.

With the 2020 season complete and millions of Covid-19 tests in the US and Europe, Bopanna is happy to be at home coaching players.

Academy Head Coach Balachandran Manikkath explains the process and progress made towards awarding 60 scholarships to the most talented candidates across different age groups.

“Our goal is player development, which is systematically done by professionals in every role — educating players that are appropriate for their age and skill level to help them become good professional players,”

Balachandran has impressive coaching experience behind his back and continues to lead India’s No. 1 player, Prajnesh Gunneswaran.

It was imperative for this academy to get off to a good start, and this was done through several tests.

“Strength and conditioning expert Cheston Pinto has been involved in testing tennis players from day one. We do musculoskeletal screening for each player when they join. We can measure improvements periodically,”

Despite high hopes, the academy does not set its main goal to immediately identify future Grand Slam champions.

“Our vision is to develop tennis players correctly, as is done in different countries with good tennis structures,”

The idea is to have many good players competing fiercely and pushing each other locally and nationally to improve the overall standard.

Strong preparation, along with the strong but fair competition is the key to the growth of the future of tennis. Bopanna currently has a plan to hold special events at the academy to find the missing link on the path to player development.

Balachandran also shared his thoughts that he would like to develop the trainer training industry and plans to introduce a three-month diploma course for trainers at his academy.

“A good academy, in addition to premises, needs good coaches. That’s why I ran an online coaching workout program and ran 27 one-hour sessions each. It was a good motivation for the coaches,”

The academy has players of different calibre and level. Thus, all tennis players can train with those who are better than them, as well as those who are not as good as them.

Bopanna also talked about parents’ concerns about their players, always training with the best players.

But who is (Rafael) Nadal, (Roger) Federer or (Novak) Djokovic training with then? By training with stronger opponents, players are ready for the most difficult matches and always stand firm.

Bopanna understands this important role that parents play. He asks them to trust the trainers and the process by discouraging them from coaching or creating fear through negative attitudes.

For both boys and girls, the academy has large and comfortable locker rooms so that they can immerse themselves in their thoughts without any interference and prepare for matches. Bopanna understands the desires and requirements of players and is very attentive to all their needs to bring out the best qualities and achievements of each player.

After being turned down by the Britannia Amritraj Tennis Academy in Chennai and not receiving a scholarship at the Batra Tennis Center run by Nandan Bal in Pune, Bopanna trained with Nandan and his team of coaches for five years to build his career.

At the last national championship in the capital of India, Bopanna Academy head coach Sujit Sachidanand led Punacha to the title. But in the centre, which currently has seven hard courts and three clay courts in development, there are competent coaches capable of realizing Bopann’s vision.

Bopanna greatly appreciates and values the talent of Indian children and the abundance of knowledge to prepare future champions. However, the trick is to put it all together without seeing it all as a profitable business. It is obvious that many are doing good tennis business, but Bopanna is too committed to player development. There is a clear goal and a guarantee that all efforts are not reduced to a simple matter.

In a special centre where tennis players train on high bouncing balls, they work with vision and purpose. Bopanna is convinced that India can raise world-class tennis players!