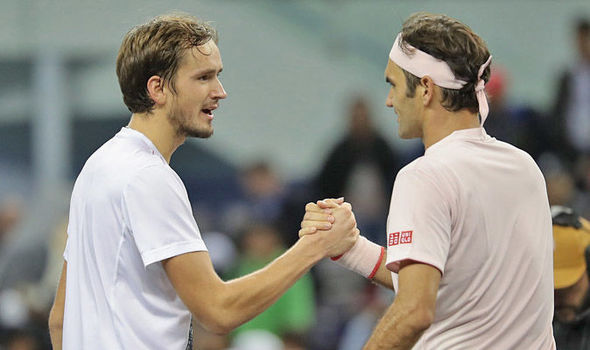 Federer was far from his usual sport form in Basel 2018, losing a set in the opening round against Filip Krajinovic and the second in the quarter versus Gilles Simon.

Gilles Simon led 5-2 in the opener and had a set point in game 12, growing his chances but staying leg by leg with Roger throughout the encounter.

The Swiss had 15 aces but lost 40% of his points behind the initial shot, providing Simon ten break chances and giving serve away five times after mixing 40 winners with 60 unforced errors.

On the contrary, Roger claimed 44% of the return points, driving away from the rival’s serve 5 times after Gilles landed only 47% of the first serve in. The home favourite player with a late break in the decider’s tenth game, setting the semi-final clash against the Russian athlete Daniil Medvedev.

Raising the level, Federer scored a convincing 6-1, 6-4 victory in only 65 minutes to earn the 70th victory in Basil and advance into the 14th final. It was the 14th triumph from 15 semi-final encounters for Roger in Basel, rattling off 11 straight wins in the semi-final round after David Nalbandian’s loss in 2002.

Roger had 22 winners and 24 unforced mistakes, thus leaving the Medveded on a 10-27 ratio and passing a challenging opponent who had the Tour-leading 37 hard-court wins in 2018 up to that point. Both these tennis players struggled to find the first serve, and Federer drew more from that, fending off 2/3 break chances and clinching four breaks to move over the top.

Landing ten winners, Roger Federer stormed over Medvedev 6-1 in the opening set, reducing the younf player to a single winner and bringing this part of the encounter home in 20 minutes.

In 2018, Roger  defeated Daniil Medvedev in straight sets in Basel semis. Roger kept a breakpoint in the opening game with an ace down the T line and held with another at 1-1 to stay strong.

Russian player hit a double fault to suffer a break in game four and fell 4-1 down after Roger’s four winners in the next one. Fading from the court, Medvedev made a terrible forehand mistake to lose serve at love in game six, which allowed Roger to wrap up the opener with three winners at 5-1.

With nothing working his way, the Medvedev gave serve away at the beginning of the second set due to a double fault, with Federer securing the break after a service winner in game two. The Russian landed a forehand long in round three to give service away for the fourth straight time before Roger ended game four with a forehand a winner for the ninth game in a row!

The stadion favourite 5-1 up, wasting a match point on the return in game  and suffering a break a lttle bit later to keep the Medveded alive. The Russian saved another match point at 3-5, reducing the deficit before the Swiss held at 30 in-game ten to seal the deal and secure the place in the final.