Maria Sharapova is getting married? English fiance: aristocrat by meaning, Repin’s fan and lover of the Russian bath 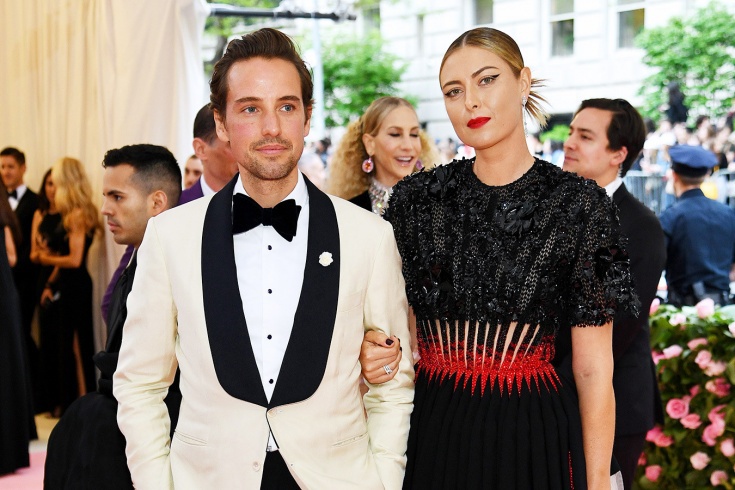 Maria Sharapova and Alexander Gilkes at a temporal event in 2019

Starting this difficult year with loud professional news of her retirement, Maria Sharapova, the former first racket of the world and a legend of big tennis, ended it with unexpected personal – about her engagement to boyfriend Alexander Gilkes. Gilkes is an art dealer with an Eton diploma, jokingly calling Edward Enninful, editor of Vogue, cousin and speaker in four languages. Rumours about the engagement of the couple appeared in January. However, there was no official proof of this. The couple announced their decision only on December 17.

Who is Alexander Gilkes: the son of an Oxford professor and doctor with craving for art

So, according to many, the 41-year-old Englishman Alexander Gilkes is a man with a child face and a rich wardrobe. He is known in the UK as a friend of princes Harry and William, princesses Eugenie and Beatrice, as well as the former boyfriend of Pippa Middleton. At the same time, he is not an aristocrat by origin, but rather by meaning, since his parents don’t come from the high society at all. Father Jeremy is a well-known dermatologist, and mother Robin is a professor at Oxford who specializes in Russia and Eastern Europe.

In his interview, Alexander Gilkes shared the impressions of his life, talking about the relationship with his parents and his professional activities.

“My parents always wanted me to do something more predictable and stable. However, I know that in such a case, I would cry from boredom, staring for days at the reports of Reuters and Bloomberg. So I found some way out of this situation. I put their vigilance to business internships, although it was much more interesting for me to spend time with Mario Testino or, for example, work with Stanley Kubrick on the set of “With Eyes Wide Closed.” As a result, I found this balance between commerce and creativity, which pleases me very much,”

According to legend, Alexander had an interest in art as a teenager, when in 1997 he visited the iconic Sensation exhibition at the Royal Academy of Arts on Piccadilly. There were many works by young British artists from the collection of Charles Saatchi, an art market figure, including the famous Tracy Emin tent “Everyone I Have Ever Slept With 1963-1995,” which unfortunately burned down in 2004 and a Damien Hirst cult shark in formaldehyde.

As for the metaphysical connection with Russia, it appeared by Gilkes even before meeting Sharapova. When he was in Eton, where, by the way, he made friends with the princes, in addition to the Spanish language, Alexander studied Russian. He also said some words about his connection with Russia, about learning the language and, of course, about his love for Russian culture.

“As long as I remember myself, I always had a special connection with Russia. My mother taught Russian at the university, so from childhood, I was familiar with Russian literature. Therefore, I undertook to learn the language myself to better understand it. Russian culture played a big role in my decision to become an auctioneer: I love Bryullov, Repin and many other architects. And my favourite cocktail, by the way, is the Moscow Mule.”

Besides, as a student, Gilkes lived in St. Petersburg for a short time and brought out his love for the Russian bath. He calls it “a pleasure you can never refuse to.”

“At first you are massaged with birch, oak and eucalyptus leaves, then you plunge into ice water, and at the end, you are wrapped in something suitable. To be honest, at this moment, euphoria comes to you beyond reality,”

At the beginning of his career, he founded an online auction, hiring a British princess, and now he is an investor in Pangaea

After graduating from university, Alexander Gilkes managed to work in the elite concierge service Quintessentially. After that, he went to Paris, where he became the manager of the main luxury holding of the planet LVMH. It happened just in those years when Louis Vuitton was tearing up the industry with collaborations with artists. And as a result, he completely moved to New York, where he settled as a shareholder in the auction house Phillips de Pury & Company. In 2011, he and two partners founded an online auction platform there, Paddle8, which specialized in inexpensive post-war and modern art.

In the summer of 2013, Russian billionaire Vladimir Yevtushenkov and Damien Hirst invested at this auction site, among others, and the British princess Eugenie came as the manager, who, by the way, Gilkes calls Eug difficult to transcribe. In 2017, the Financial Times said the Paddle8 “determines the collection of art in the digital age.” However, in the same year, the company went bankrupt.

Such experience, that is, as an auctioneer, allowed Gilkes to hold charity auctions in different years. This list includes, for example, auctions by Elton John, Madonna and the American AIDS Research Foundation. It helped Alexander to become a useful circle of celebrities. The success of the Paddle8 led him to the ratings of the most creative and influential executives in the art industry, the list of the most well-dressed men Vanity Fair and GQ, as well as the board of directors of the New York Academy of Arts. As for the present, the current business of Gilkes is the investment company Square Circles, in the portfolio of which is the environmentally friendly startup of Miroslava Duma Pangaia, which launched a global obsession with soft sports suits in caramel colours.

Already married? She is a London IT-girl who became a New York designer

In 2008, Gilkes moved to the United States with his lover Misha Nonoo, whose real name is Edwin Eclstwite, the daughter of an Iraqi and Englishwoman who was born in Bahrain. From the age of 11, she lived in London and studied in Paris. Gilkes met his ex-wife back in 2003 when he was 24, and she was 17.

In a short interview that Nonoo and Gilkes had previously given, both shared their impressions of the first acquaintance.

“In our first meeting, I thought that in life, I hadn’t seen such a daring teenager. I think it was love at first sight,”

And Nonoo, in turn, said:

“He was so cute and so well dressed, so I thought he was gay.”

In New York, Nonoo, who is an educated designer, founded her clothing brand and in 2013 reached the final of the annual Council of Fashion Designers of America (CFDA) competition, namely the fashion Oscar, awarded in conjunction with Vogue. A year earlier, the former couple were luxuriously married in Venice. An interesting fact: before that, Nonoo was so absorbed in a career that she twice refused Gilkes.

Over the years of his life in Manhattan, Gilkes and Nonoo became the so-called power couple, which was given more attention in The New York Times note than Anna Wintour. Unfortunately, the marriage broke up in 2016 after 13 years of relations. It’s curious that shortly before the break, Nonoo introduced Jilkes’ friend to her friend. Soon after, they married in Windsor.

A new stage in the life of Gilkes and Sharapova

The details of the love story of Gilkes and Sharapova are unknown since they both rarely talk about private life. Just at the beginning of 2018, they were noticed together at the Los Angeles airport, then in London, and after that also in Paris, Italy, New York, visiting Marina Abramovich, the President of Rwanda, and so on. Also, at the Frieze London art fair the fall before last, they received Swiss forged passports as a symbol of what is probably close to them both – a world where neither countries nor opportunities have borders.

“I said yes from the first day we met. This was our little secret, wasn’t it?”

Well, love has no prohibitions or restrictions. Let’s hope it’s a happy marriage for both of them. It remains only to wish the newly wedded well-being and great happiness.