Gasparyan breaks the 11-loss streak, Zvonareva reach the semi-final for the 1st time since 2019 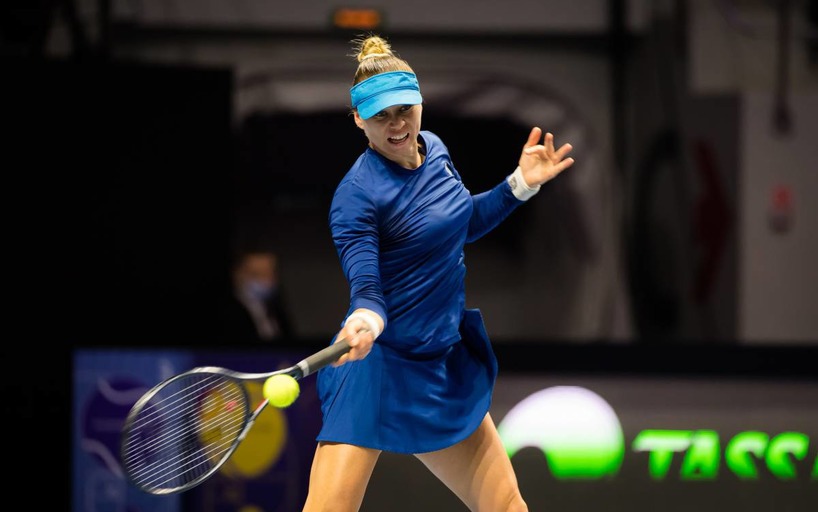 Vera Zvonareva during a match at the St. Petersburg tournament

The matches of one rather large tournament, the St. Petersburg Ladies Trophy, continue to this day. A total of 28 players got a chance to fight for the right to be called the best on indoor hard courts of St. Petersburg and for the prize fund that amounts to more than 500 thousand dollars. However, today, the names of four semifinalists are already known, so they still have a chance to win in contrast to other athletes. By the way, it should be noted that all participants of the ½ finals are Russians.

Who will be the strongest and use the given opportunity?

Gasparyan broke her streak of 11 losses to the top-50 and reached the giant semifinal of her career, while Zvonareva reached the WTA semifinal for the first time since 2019

Margarita Gasparyan, who received a WC at this tournament, defeated Russia’s first-ranked Ekaterina Aleksandrova 6-2, 7-5 in the quarterfinals.

Gasparyan reached the WTA semifinals for the fourth time in her career. The last time she did so was in April 2019.

In the live rankings, Gasparyan has risen 27 ranks and is now ranked 99th. However, she can still be surpassed by several tennis players competing in St. Petersburg and Monterrey.

During the matches Gasparyan has played so far, many have noted she has an unusual technique. After reaching the semifinals, Margarita explained why she plays with one hand on the left in her short interview.

“It’s hard to explain why I chose this shot. Before I started using it, I saw Carla Suarez-Navarro, Justine Henin, and Roger Federer play it that way. I just love this shot,”

She also explained why she’s using a vibration damper in the shape of a devilkin.

“I used to have a heart. And then I thought, I’m a pretty soft person, I’ll hang myself a little devil, maybe it will turn me on. So far, it seems to be working,”

she added with a laugh.

As for Gasparyan’s semifinal opponent, it was former world number two Vera Zvonareva, who beat Anastasia Gasanova 6-3, 6-1 in the ¼ final.

For the 36-year-old Zvonareva, it will be her 58th career WTA semifinal and the first since February 2019, when she was among the top four in St. Petersburg.

Zvonareva about the ranking:

Russia’s Vera Zvonareva, who reached the semifinals for the first time in a long time, in a short interview answered the question if she follows the ranking, where she currently occupies the 145th position.

“No, I don’t think about the ranking at all. It’s not important for me. The main thing for me is to focus on my game and try to improve it to beat strong opponents,”

The 36-year-old also said the situation is such that the ranking is frozen now, and it’s challenging to climb up the rankings – even though she has had some successful performances. In her opinion, it’s tough for her because she didn’t play due to injury during the period when the points were retained in the rankings.

“So now, despite the points, I’m earning, I’m not going up in the rankings much, but I think it doesn’t matter. The main thing is to play against strong opponents and beat them.”

Zvonareva, who was second in the rating in 2010, will be at least 120th according to the results of the tournament in St. Petersburg.

“Now I’m not cooperating with agencies and managers. I think I will hold talks after this tournament”

Anastasia Gasanova, the world No. 241, also gave a short interview after losing to Zvonareva in the quarterfinal of the St. Petersburg tournament. She responded to a question about whether she felt like she belonged at the WTA level.

“Of course, I’m already used to the atmosphere, the girls, the organizers, I’d like to stay here longer. I’m going to take a break for about three or four weeks, and then I’ll start clay season. I think I’ll start in Istanbul.”

It should be noted that in St. Petersburg, Gasanova won two three-hour matches, and in the quarterfinals lost to Vera in only two sets.

“Today, the concentration was probably enough for only four games. Then, of course, the physical condition failed, and I didn’t manage to show the maximum.”

The 21-year-old Russian, who will enter the top 200 next week, also answered if her agents had any new offers from sponsors.

“At the moment, I’m not working with any agencies or managers. I think I will negotiate after this tournament.”

Will the tournament in St. Petersburg be won by a Russian for the first time?

As for the results of the other quarterfinal matches, the situation is as follows. Svetlana Kuznetsova beat Jacqueline Christian, the only non-Russian player in the top eight, and Daria Kasatkina was a three-set winner over compatriot Veronika Kudermetova 1-6, 6-1, 6-2.

That leaves only the Russian players in the semifinals: Svetlana Kuznetsova, Vera Zvonareva, Margarita Gasparyan, and Darya Kasatkina.

It ensures that for the first time in the history of the tournament in St. Petersburg, which at the WTA level has been held since 2016, the champion will represent Russia. The Russian has never reached the final before.

Kuznetsova, born in St. Petersburg, reached the semifinals of the home tournament for the first time.

It should also be noted this year, St. Petersburg had the weakest line-up in the history of the tournament. There wasn’t a single top-30 tennis player on the main draw.

The semifinal matches will be played today at 15:30 Moscow time.