Can the loss be “lucky”? Ankita Raina’s chances of returning to the Australian Open with the help of a lucky loser 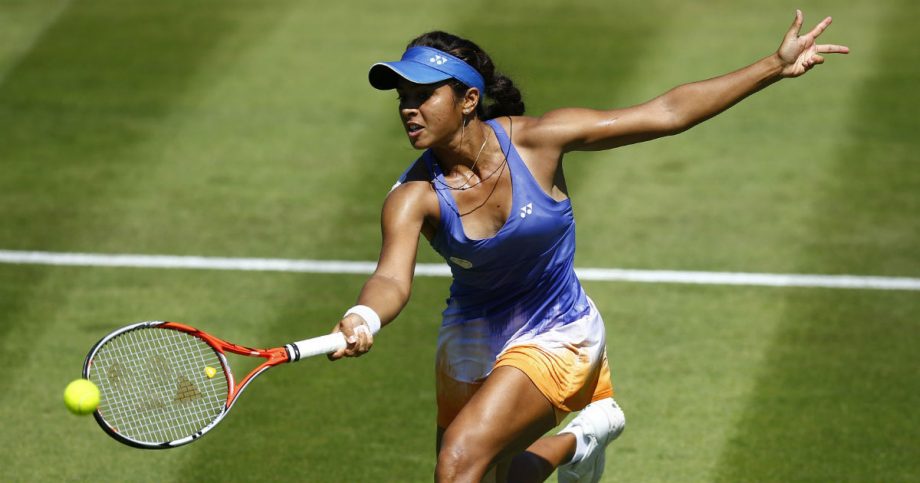 Ankita Raina during one of her grass-court matches

As you know, the Australian Open-2021 will allow main-seeded players to take to the courts for the first time on February 8. But the Grand Slam qualifiers haven’t only been on the courts for some time, but they’re also in contention for a place in the main draw. Of course, there are Indians among them, who are keen to make it to the main draw to face the world’s strongest players. If they perform well, they will be able to make themselves memorable to the viewers and raise their position in the world rankings by getting quite a lot of points. So can they do it?

Indian tennis player Ankita Raina, currently placed 180th in the world ranking, was aiming to become the third Indian to reach the Grand Slam women’s singles main draw. Unfortunately, the attempt didn’t turn out to be entirely successful. However, despite the defeat, which seemed to decide absolutely everything, the Indian still has a chance to be in the main draw.

Despite being one of India’s strongest players, Ankita Raina experienced a 6-2, 3-6, 6-1 defeat to the Serbian Olga Danilovic in the Australian Open’s final round of qualification.

The 28-year-old Indian started the match not very confidently, losing it in the end 2-6. Then, she gathered all her strength in her fist and thus prevailed in the second, 6-3. But Danilovic, the 183rd ranked player in the WTA rankings still with a WTA title to her name, changed her tactics and came back with a convincing win. The score in the last set was 6-1 in favour of Olga.

However, as already said, Ankita still has every chance of making it into the main draw, having lost in qualification. She has every right to puff herself up with hopes of making it to Melbourne, but only as a lucky loser. The question you’ll be asking is: what is it, and how does it work? It’s pretty simple. Depending on the results of the remaining matches in the final round, the tournament organisers will randomly select a few players who, although they lost in the final round of qualification, will be fully eligible to go on to win the Grand Slam tournament.

In a short interview after her match with the Serbian Olga Danilovic, Raina talked about what her expectations are in this regard.

“Organisers are bringing me to Melbourne and considering the COVID-19 situation, and there could be withdrawals. I’m seventh in the queue. I’m still hopeful.”

The Indian also commented on her match and admitted her opponent definitely came out on the court with her best game.

“It was good tennis from both of us, top-level from the first game. My opponent was serving very well, and she was able to win free points with her serve,”

Raina also revealed she noticed that her opponent had chosen the following tactic in the second set: serve powerfully. Therefore, the Indian immediately improved her serve game, which brought her not even many points, but an entire set.

At the beginning of the third set, however, Olga started serving well again and quickly won a few games, thus gaining a 3-0 lead. Then, having also increased the speed of her game and the strength of her serve, she continued her steady march to victory. Even though when the score was 1-5 in the set, Ankita kept repeating the words “don’t give up”. However, as we can see, she was still unable to defeat the Serbian.

“I still had hoped I could come back because I gave everything I had out there. I’m proud of the fighting spirit I pointed out today.”

Ankita Raina aimed to become the third Indian to reach the women’s singles’ main draw of a Grand Slam tournament. Of her compatriots, only Nirupama Vaidyanathan and Sania Mirza managed to do so. Nirupama reached the second round of the Australian Open in 1998 while Sania last competed in 2012.

As for the men’s draw, the Hindus’ performance in the men’s singles qualifier came to an end on Tuesday when Ramkumar Ramanathan and Prajnesh Gunneswaran lost in the second round. Ramkumar lost 3-6, 2-6 to Chinese tennis player Taipei Tung-Lin Wu in the 69th minute while Prajnesh was defeated by Frenchman Constant Lestienne 2-6, 3-6.

Their defeats also only mean that Sumit Nagal is still the only Indian tennis player to have competed in the singles event of the first Grand Slam of the season. It should also be noted Nagal has been awarded a wild card in the men’s singles event.

We just have to watch for further developments and hope that Ankita Raina turns out to be the one who will be lucky enough to make it to the main draw of the Grand Slam tournament and get a chance to prove herself for the second time.