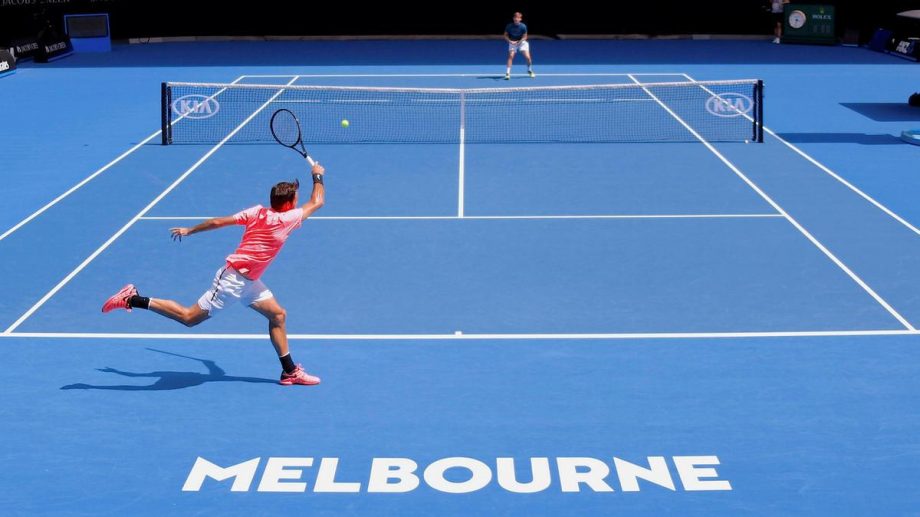 One of Australian Open Tennis Championships

According to tournament rules, players and officials are required to pass the test and get negative for COVID-19 before boarding.

On Saturday, health authorities announced that two cases of COVID-19 have already been reported from a charter flight from Los Angeles. This plane carried tennis players, coaches and officials to Melbourne ahead of the Australian Open.

However, the positive tests left all passengers on that flight stuck in a 14-day strict hotel quarantine, unable to leave their hotels and apartments, and for players unable to train.

“A crew member and non-player Australian Open were transferred to a wellness hotel after testing positive for coronavirus (COVID-19),”

the Victoria Department of Health said in a statement.

However, all of the remaining 66 passengers on this flight are in close contact. All players, their coach or families, will not be able to leave the quarantine for training. The good news is that the rest of the crews tested negative and were allowed to fly without passengers directly to their home port.

Australian Open director Craig Tealey made a statement that the 24 players on this flight will not be able to leave their rooms for 2 weeks and until they have been verified.

The Australian Open Tennis Championships kicks off on February 8.

“We are communicating with all people from this flight, and especially with the playgroup, the conditions of which have now changed to ensure that their needs are met as much as possible and that they are fully aware of the situation,”

He also noted that they think of the two people who tested positive during the flight and wish them well.

Local media reported that Kei Nishikori, who finished second at the 2014 US Open, tested negative for COVID-19 after two positive tests. And also Victoria Azarenka was among the group of players who arrived on the flight from LAX.

What’s more, reports emerged that emails were sent to all players and officials who flew on that flight, stating that they would no longer be able to leave the hotel for training.

However, some players will be allowed to train under strict conditions and under supervision for up to five hours a day.

“The chief medical officer examined the flight and determined that everyone on board should be isolated and will be in their rooms for a 14-day quarantine period,”

“We understand that you did not imagine the beginning of your preparation for AO, but our entire team is here to support and do our best to help you get through it.”

Some early controversy concluded that top 30 players Dayana Yastremskaya from Ukraine, who was suspended from doping on January 8 for failing a doping test, flew to Australia and was also among those people who were in quarantine.

Based on the International Tennis Federation’s official data, 20-year-old Yastremskaya tested positive for the metabolite meterolone. It is a prohibited substance that can be used to increase testosterone levels.

However, they said on Friday that the tennis player is still eligible for the cancellation of the temporary suspension and that she could compete in Melbourne Park if that were the case.

The only option in which this can happen is if Yastremskaya starts her 14-day quarantine from this week.

Fifteen charter flights and early arrivals are all Tennis Australia’s attempt to host the tournament despite being banned from overseas.

Regardless, Australia has done an excellent job of containing the virus, with just 909 deaths in the country.

The state of Victoria had 810 of them during the second wave three months ago, which led to a night curfew and full quarantine in the city.

Five-time finalist Andy Murray’s status for the tournament was questioned after testing positive for COVID-19 just days before his scheduled flight to Melbourne. According to the published tournament, the three-time Grand Slam champion, who received a wild card in Melbourne, is in self-isolation at home in Britain.

Sandgren’s original test was positive back in November, and the health authorities of Victoria in Australia have suggested that he is no longer contagious.

Novak Djokovic, Rafael Nadal and Serena Williams are famous players at the exhibition event in Adelaide, South Australia on January 29. This group of players flew directly to Adelaide to begin the hotel quarantine period.