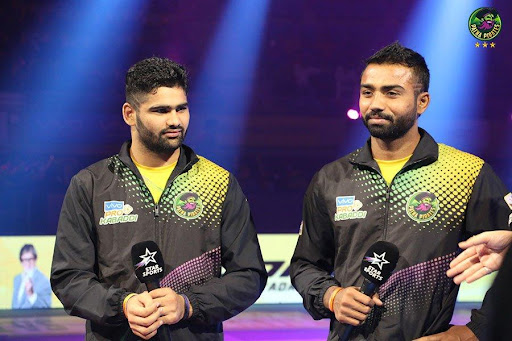 The first Semifinal battle of Pro Kabaddi League Season 8 is between the table-toppers Patna Pirates and the belligerent UP Yoddha side. Where two neighborhood rivals will lock the horns at Sheraton Grand Whitefield Hotel in Bengaluru to claim the final seat.

These two neighboring states share a classic rivalry for the supremacy of the north region and the intensity of this clash always remains sky-high. Circumstances will be heated up when Pardeep who is a three-time champion with Patna will try his best to prevent the Pirates from entering into the last combat. While former Yoddha raiders Prashanth Kumar Rai and Monu are also seen in the lead roles to give Patna the fourth star on the badge.

Patna received direct qualification to the Semifinal round as a reward for topping the PKL standings by obtaining 86 match points from 22 league matches. Yoddhas fought Pune in the Eliminator round and convincingly sent Anup’s Paltan back to the cultural capital of Maharashtra. UP will be facing Patna in the playoff games for the first time as their neighbors are participating in the knockout round for the first time since 2017.

Coach Jasveer took a gamble in Eliminator by fielding a combination of two raiders and five defenders for the first time and it paid off beautifully. Hence he is expected to continue with the same combination as Gurdeep is too good to be left out, the responsibility of raid points will be on the reliable shoulders of Pardeep, and Gill and Jadhav will be prepared as a backup for Plan B. On the other hand, Patna gaffer Ram Mehar Singh will be in a dilemma while choosing between Guman and Monu Goyat although the experienced candidate Monu has an advantage over the youngster.

The PKL universe underestimated the Pirates’ contention for the title as they were without the services of ‘Patna’s laal Pardeep Narwal’ for the first time in a while and it was the first season of the transition. Captain Prashanth Kumar Rai made a bold statement at a curtain-raiser press conference that we will see Pirates taking the field on the 25th of February and the Iceman is on the verge of delivering the promise. The Bihar-based franchise was the first side to officially ensure the playoffs qualification when they already had four games in hand from the league stage.

UP seemed inconsistent in the first half of the tournament where Surender was leading the attack alone. Then there was no way back when Pardeep gained back his form and joined the party along with Gill and Shrikant. While as usual, the Defensive department has always been the strength of UP’s core power. Yoddhas have played every playoff round since their introduction to the Pro Kabaddi League and are just one step away from their maiden final appearance.

The head-to-head record is equivalent as both franchises are standing on a count of four wins against each while a solitary game remained resultless. Yoddhas edged down the Pirates in a 36-35 thriller in the face-off of Season 8 where Pardeep took redemption by scoring a marvelous Super 10 against his former franchise. Unfortunately, he was removed early by UP coach as Mohammadreza Shadloui Chiyaneh registered consecutive High 5 against the Uttar Pradesh-based franchise in a two-point victory.

A short but intense history of this head-to-head rivalry between UP and Pune is steered by the Yoddha franchise with four wins while Paltan’s count is currently on three. Since the elimination from the hands of Paltan in the debut season, UP registered four straight wins against its counterparts. And the Yoddha’s winning streak of four matches was finally broken by Paltan in their previous face-off with the help of heroics from Mohit and Aslam.

Mohammadreza Shadloui: The three-time champions Patna Pirates are going for a hunt for their fourth one having a left-corner defender who is in the form of his life. The Iranian Prince is just one point away from the prestigious Orange Band which is currently owned by Sagar Rathee whose Season 8 campaign is already over.

Shadloui’s tally of eight High 5s is the highest in the league so far while six of them came in his last nine appearances. He has scored a whopping total of 20 tackle points with an incredible strike rate of 77% in his last four fixtures and is ready to continue this purple patch in the Semifinal as well. The youngster will be involved in a direct battle with Surender Gill and will also try his best to intervene in the escape route of Pardeep. 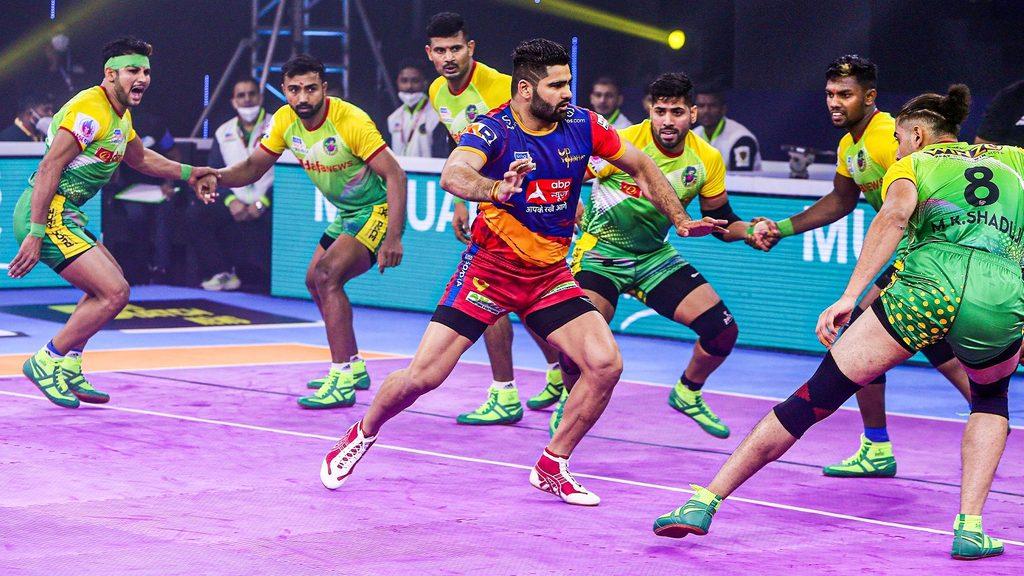 Pardeep Narwal is in a hunting mood

Pardeep Narwal: Pardeep’s Season 8 journey has been filled with a lot of ups and downs but the UP superstar turned up for Yoddhas when it mattered the most. His tally of 18 raid points against Pune in Eliminator 1 showed the PKL universe that form is temporary but class is permanent. The record-breaker becomes even more dangerous when it comes to the knockout games hence the former Patna’s face will be given extra attention by the Pirates think tank.

Every aspect of the game is favoring the Patna Pirates side to emerge as winners of this clash. Although Patna knows very well to what extent Pardeep can go to turn the game in his team’s favor as the record-breaker has done that for the Bihar outfit many times in the past.