Patna Pirates smash the door to the final in dominant fashion with a 38-27 win over U.P. Yoddha 

The Patna Pirates were up against their neighbor UP Yoddha in the ‘Semifinal 1’ of Pro Kabaddi League Season 8 as both teams looked to make their way into the finals.

The Patna-based franchise was able to stamp their ticket to the finals with a 27-38 win over their opponents courtesy of brilliant performances from the entire team. Guman Singh was the top scorer for his side with eight points to his name.

On the other hand, Shrikanth Jadhav was the top scorer for the UP Yoddha with a Super 10 to his name. None of the other raiders were able to make a dent on the Pirates as they fell victim to the rock-solid defense. Ashu Singh was the top defender for his side with four points to his name including two super tackles. None of the other defenders could make a remarkable impact on the game as the team could only manage nine tackle points in the contest.

The Pirates started the game hot with consecutive points as Sachin and Guman picked up raid points for their side. The defense was on fire as well with Mohammadreza picking up tackle points for his side. Patna established the early lead in the game with a four-point lead in the first five minutes of the game and did not allow the Yoddha a single point.

The Uttar Pradesh-based franchise fired back with a super tackle on Sachin followed by a touchpoint from Surinder to turn the scoreline to 3-4 reducing Patna’s lead to just one point. Both the sides slowed down the pace of the contest in the next few minutes as none of the sides were able to score a point.

Patna broke the deadlock as Guman scored a multipoint raid in a do-or-die raid to get a three-point advantage back for his side. Patna capitalized on the momentum as Mohammadreza tackled Shrikanth Jadhav to reduce the Yoddha’s to just two players on the mat. Sachin scored a quick touchpoint to get UP down to just one player. Surinder tried to get a revival for his side but was thumped with an all-out in the 9th minute to increase their lead to seven points.

Skipper Prashant Kumar Raid added to the worries with another multipoint raid to get both corners Sunil and Nitesh out in a single raid. Neeraj Kumar joined the fray with a tackle point to his name with a dash on Shrikanth. Sachin added more to the worries with a touchpoint in a do-or-die raid to reduce UP to three players on the mat. Pardeep was tackled by Sunil this time as Patna jumped in on the raider to send him to the sidelines. 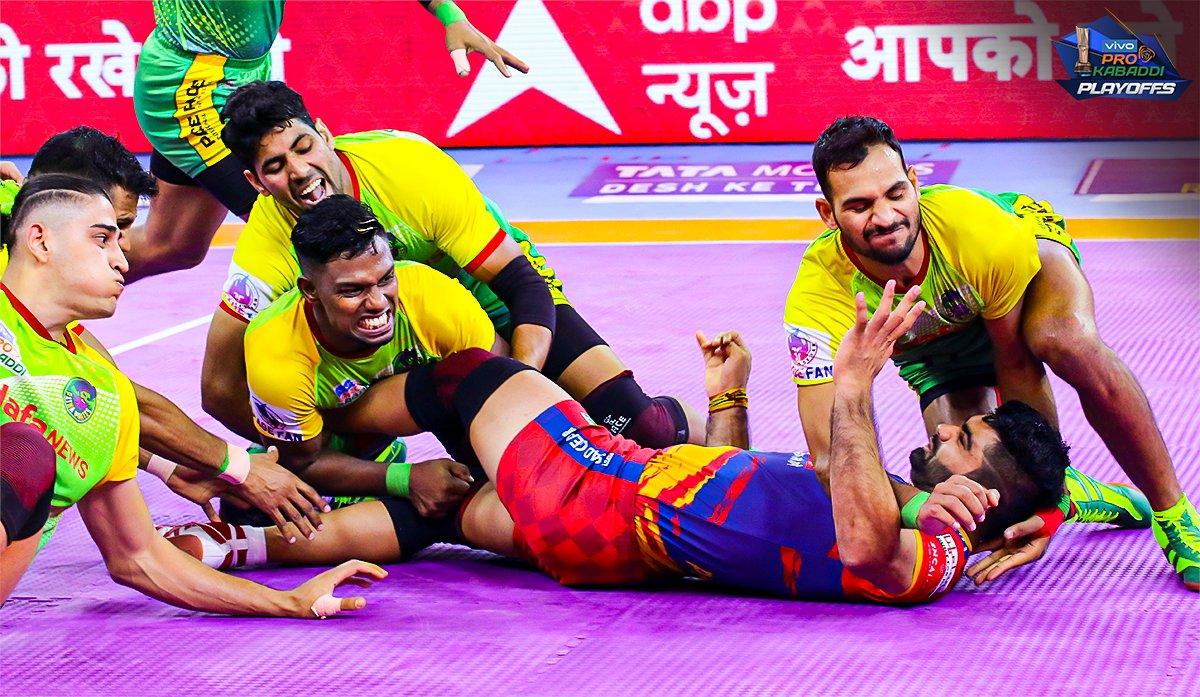 UP tried to make a comeback with another super tackle in the 15th minute to get the point difference down to ten points with Patna leading by 16-6. Patna however brought an end to their struggle as Neeraj blocked Surinder to reduce UP back to two players on the mat. Patna inflicted the second all-out on UP Yoddha 17 minutes into the game to increase their lead to 14 points.

Pardeep picked up his first point in the 18th minute of the contest with a touchpoint over Sajin. He tried to get his side back in the game with his consecutive raid point with a touch over Neeraj. Guman derailed the momentum with a touchpoint on Sunil to shift the tide back towards his side. Patna capitalized on the momentum with Mohammadreza’s tackle on Surinder as the franchise established a fourteen-point advantage over their opponents leading by 23-9 heading into the second half of the contest.

The Pirates built on their momentum with consecutive points in both departments as Guman scored a touchpoint followed up a tackle point on Pardeep. Shrikanth tried to get his side back in the game with their third super tackle of the contest, reducing the point difference to 13 points.

However, the Pirates were in no mood to let their opponents find a comeback in the game as they tackled Shrikanth to reduce UP back to two members on the mat. Patna inflicted the third all-out on the Uttar Pradesh-based franchise eight minutes into the second half, establishing a seventeen-point advantage over their opponents, leading by 31-14.

UP tried to initiate a comeback in the game with three consecutive points with just ten minutes remaining in the contest. Mohammadreza however put an end to the struggles with Mohammadreza picking up his record tenth Thigh 5 of the season. The Pirates kept a strong check on Pardeep and did not allow him to score in the next five minutes of the contest.

With just five minutes left into the game, the Uttar Pradesh-based franchise reduced the Pirates to three players on the mat. The Yoddha got a breakthrough in the game with an all-out on the Pirates to reduce the point difference to just seven points with the Pirates in advantage by 34-27. Monu however closed the door for the comeback with a double thigh hold on Pardeep.

The Pirates kept the flow in their favor with consecutive points to keep the game in their bag as they punched their ticket for the fourth time in their history with a 38-27 win over the UP Yoddha.