Dabang Delhi snatches the title under the jaws of Patna Pirates in a thriller!  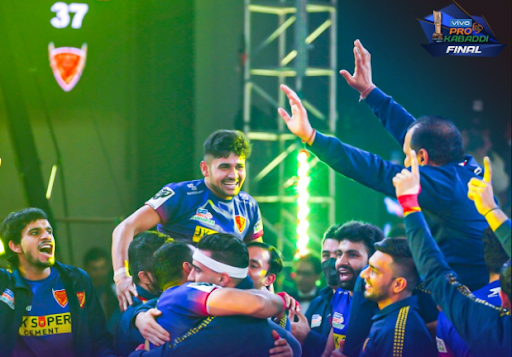 The Patna Pirates were up against the challenge of Dabang Delhi in the finale of Pro Kabaddi League Season 8 at Bengaluru’s Sheraton Grand and Whitefield. This was a battle of the titans in true sense as both the sides emerged as the top sides on the points table in the league fixtures.

Dabang Delhi looked on cloud nine after their win against the Patna Pirates in the final of the tournament as the franchise managed to get past their opponents 37-36 at the end of the final whistle to clinch their first trophy in eight editions after missing out on the title last season against Bengal Warriors.

Naveen Kumar and Vijay Malik were stunning for their side as the raiding duo both racked Super 10s to their name to lead their side past the finish line.

On the other hand, the Patna Pirates will be extremely disappointed with their loss tonight as they had the control of the game for the majority of the contest despite their defensive unit looking off color throughout the fixture.

The team management missed the count of their substitutions in the second half of the game and benched Guman Singh, Sachin Tawar and Prashant Rai who were terrific in the first half of the game.

Dabang Delhi had the opening raid to the contest, as Naveen started off the proceedings with a bonus point to open the tally. Patna equalized in the next minute as skipper Prashant got a touchpoint on Delhi’s skipper Joginder to get the scores 1-1. Delhi kept the scoreline running with bonus points, while Patna kept the man advantage in their favor with consecutive touchpoints to their name.

Sandeep was the last man standing for his side and could not score a touchpoint as the Patna-based franchise inflicted the first all-out upon their opponents in the 9th minute to register an 8-12 lead in their favor. Naveen picked up his 200th point of the season with a touchpoint on Neeraj. Naveen constantly kept his side in the game with continuous touchpoints and did not allow the Pirates to run away with their lead.

With just three minutes remaining in the contest, both the sides slowed down of the pace of the game and relied on their do-or-die raids to pick points for their side. At the end of the first half the Patna Pirates had a two point advantage over their opponents, leading by 15-17 heading into the final half of the contest. Both the sides were reliant on their offensive firepower as the defensive units looked silent and had just two tackle points each in the first twenty minutes.

The Pirates had a fiery start to the final half as Sachin picked up a touchpoint on Sandeep to keep the scoreboard running. Both teams traded points back and forth with each other with consecutive tackle points. Guman kept his side in the game once again in a do-do-die raid with a multipoint raid on Manjeet and Krishan. Mohammadreza capitalized on the momentum with a tackle point on Naveen to retain their four point advantage over Delhi. 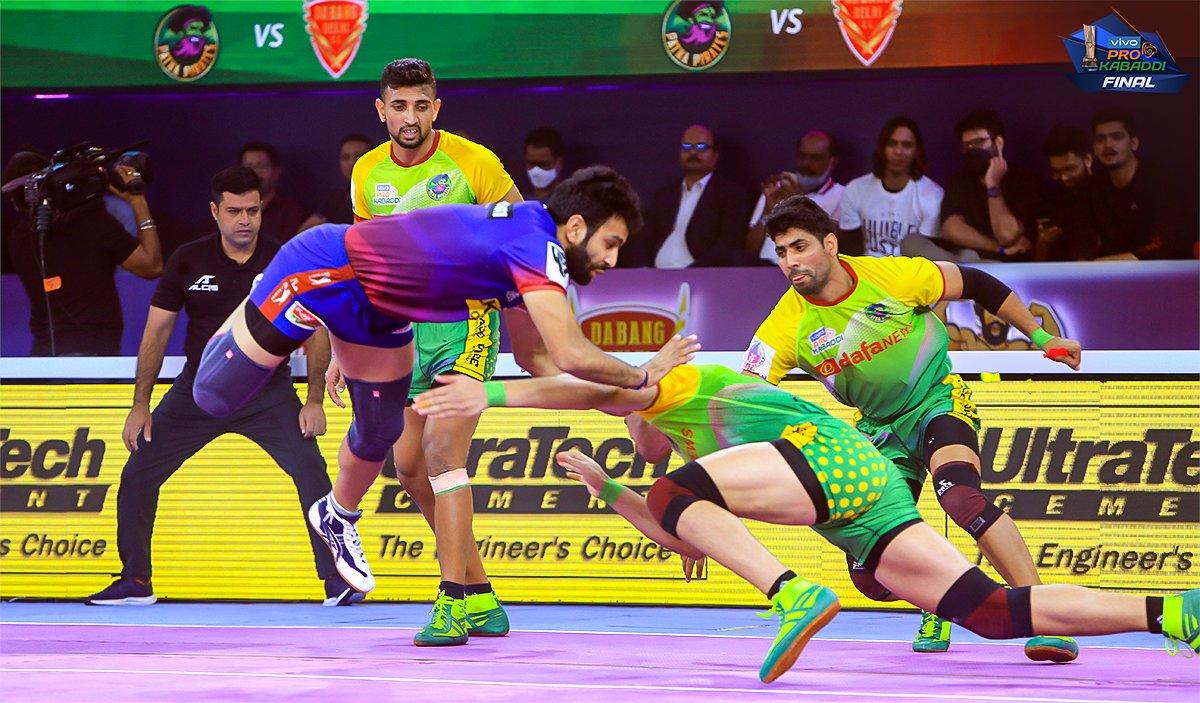 Vijay turned the tides of the game with a Super raid with eleven minutes remaining in the game as the raider managed to wipe out both corners and secure a bonus point for his side to make a big dent on Patna’a advantage. Naveen equalized the scores with a touchpoint as both sides levelled at 24-24 with less than ten minutes remaining in the finale.

Delhi registered the lead first time in the game with Naveen completing his Super 10 with a touchpoint on Sajin. Guman was the last man standing for his side and scored a multipoint raid to get the lead back in their favor.

Patna fumbled the bag with technical issues as the management failed to keep a count of their substitutes and benched Guman, Prashant and Sachin with no substitutions left and were only left with Monu on the mat.

Delhi inflicted the first all-out on the Pirates to increase their advantage to two points leading by 28-30 with just six minutes remaining in the contest. Vijay capitalized on the momentum with a multipoint raid to add two more points to his team’s tally. Monu however kept his side in the game with a touchpoint on Joginder. With just five minutes remaining in the contest, Delhi had a three point advantage and looked like the clean favorites to win the contest.

Vijay completed his Super 10 with another Super raid to get his team into the driving seat with an advantage of five points. Monu tried to chip on the lead with bonus points for his side but with less than three minutes left in the game it looked like a mountain to climb with none of their main raiders on their mat. Sunil made a fatal mistake as he went for an ankle hold in a do-or-die raid to help Delhi retain their lead.

With nerves high and one point lead in their advantage Naveen managed to hold the lead in his team’s favor as Dabang Delhi were able to edge past the three time Patna Pirates to clinch their first title in the history of the Pro Kabaddi League with a 36-37 win over their opponents.