Dabang Delhi off to a dream start, Bengaluru Bulls and UP Yoddhas win 

The Dabang Fauj has kick-started the title defense campaign in style!

The awaited night finally comes to its end as the final results of the Pro Kabaddi League Season 9 are out. The defending champions Dabang Delhi thrashed U Mumba in a one-sided saga while the home team Bengaluru Bulls and UP Yoddhas also tasted the sweet taste of victories.

‘Parimatch News‘ brings you a detailed roundup review of three Match Day 1 fixtures of the PKL 9.

Despite the hype for the Mumba youngster Kiran Magar, coach Anil Chaprana gave the nod to Mohit ahead of the double National Silver medalist in the left-corner position. Meanwhile, the Dabang Fauj also kept some big names such as Vijay Malik and Amit Hooda on the substitute bench. The defending champions exploded in the initial minutes by enforcing an early all-out on the Mumboys.

The second-half action was commenced by the Capital-based franchise with a robust lead of nine points which got even bigger in the latter half. Consecutive Super Tackles on the Delhi skipper Naveen brought the Orange and Blacks back into the game for a while right before the final fourth. However, the Naveen Express was finally able to break the deadlock of the Super Tackle situation and inflicted the second and final all-out to end it on a one-sided scoreline of 41-27 at the final whistle.

Naveen Goyat turned his captaincy debut match into a memorable one by becoming the first player to score a Super 10 in the ninth edition of the PKL. The ‘Naveen Express’ departed for the City of Dreams and returned to the capital scoring 13 raid points consisting of 11 touches and 2 bonuses. The 22-year-old Services superstar had a 100% not-out rate in the first half and went on to achieve his PKL career’s 43rd Super 10 in no time.

The Dabang raiders showcased the offensive metal but the actual difference between the two winners and losers was made by Delhi’s defensive department. The defensive wall of Delhi featuring Sandeep Dhull (4), Krishan Dhull (4), Vishal Lather (4) and Ravi Kumar (2) summed up an astonishing tally of 15 tackle points. The outcome of the opening fixture has left a learning note for the young unit of U Mumba which must have to work on their exposed weaknesses before turning up for the next game. 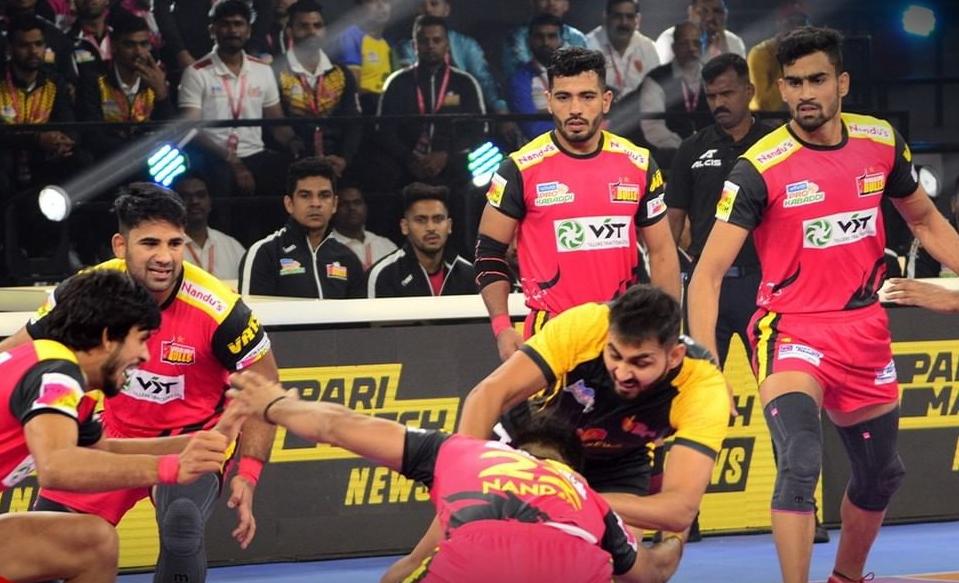 The young Bulls outwitted the legion of veteran Titans

Randhir Singh Sehrawat fielded his strongest seven on the mat while the Titans handed a debut to the young assailant Vinay Redhu. Hyderabad had an aggressive start to the game but faced an instant counter-attack from the Bulls which brought them into a commanding position. However, the Bengaluru Reds couldn’t keep their lead for a longer time and the scoreline remained neutral at 17-17 at half-time.

An athletic lion jump from the substitute raider Rajnish Dalal resulted in the first Super Raid of the season and played a pivotal role in turning the game on their side. Both of the combatants continued the slow pace of the game in the second half too and the play remained neck-to-neck till the decisive moments. Randhir’s army regained a five-point lead in the 34th minute and maintained the hefty difference till the full-time whistle of the referee Aarti Bari.

The Post-Pawan era of the Karnataka-based franchise kick-started with a bang as the home team did not upset the spectators who turned up in big numbers to support their team. It was a complete team effort by the Bulls who played better as a unit and opened the winning account of Season 9. On the other hand, the star-studded defensive line of Telugu failed to live up to expectations and could fetch only six tackle points throughout the 40 minutes of play.

The new Prince of the Bengaluru clan, Vikash Kandola stumbled in the early minutes but somehow managed to get a steady stance. Brightest disciple of coach Sehrawat, Bharat Hooda continued his fine run in the PKL after scoring 5 raid points at a strike rate of 38%. The highest scorer from the winning side was the debutant Neeraj Narwal who switched to Bengaluru from Delhi this season and went on to score 7 raids and 2 tackle points on his debut day. 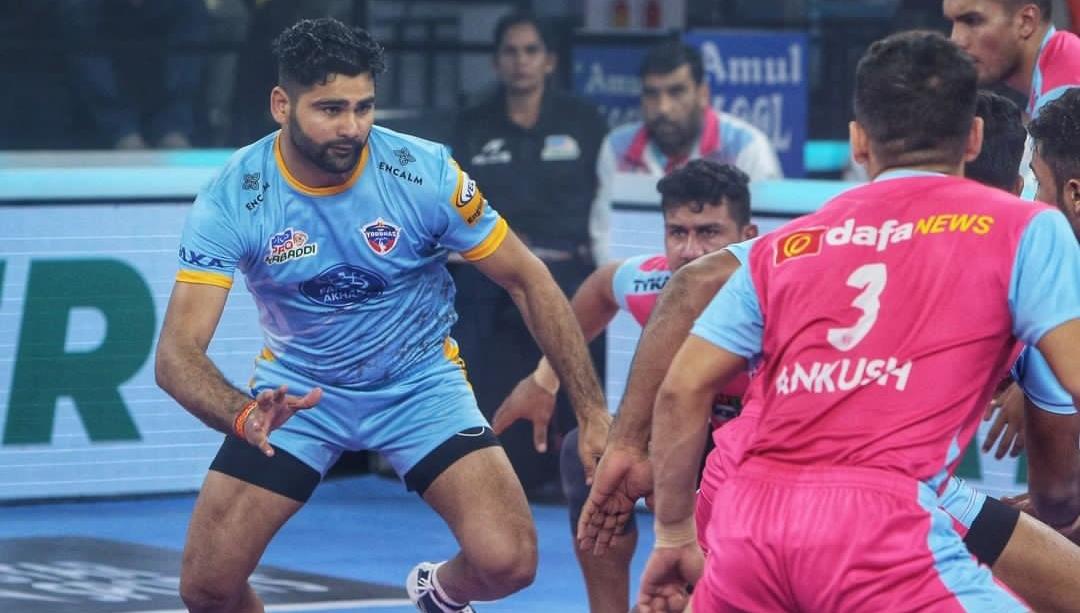 Nerves of steel from the record-breaker

The Starting Seven which took the battlefield for UP was almost the same as the previous season as the youngster Rohit Tomar was preferred over the former captain Nitin Tomar. Jaipur gaffer Sanjeev Baliyan also fielded an expected lineup to set the stage for the left-corner defender Ankush Rathee to make his debut at the world’s greatest stage of Kabaddi. The strike raiders of both teams, Pardeep Narwal and Arjun Deshwal were dashed out in their maiden raids by the opposition covers.

The defenders of both camps thoroughly dominated the first-half play where the high-profile offensive names found it tough to keep their feet on the mat. Jaipur’s half-time lead of three points was smoked out by the Yoddhas who inflicted a quick all-out in the initial minutes of the latter half.  An incredible Super Raid by Ajith Kumar reduced the lead but the following Super Tackle by UP on the same raider reimbursed the earlier defensive error.

In a tale of a seesaw between the two neighbourhood rivals, UP’s calm and composed approach in the decisive moments turned the game in the favour of knights wearing Sky Blue outfits. When Ajith entered UP’s court to perform the final raid, he needed just a single point to level the scoreline but the Tamizhan Panther failed to prevail. A late resurgence of the attackers and consistency of the defensive line helped the Northerners to win the combat by 34-32 in a nail-biting thriller.

The substitution of Bhavani Rajput in place of Showman Rahul Chaudhari was a masterstroke by Sanjeev Baliyan which almost turned the tables for the inaugural PKL champions. The 36th National Games gold medalist Ashu Singh has sustained his purple patch further and emerged as the joint highest-scoring defender with four points including a solitary Super Tackle. The record-breaker Pardeep Narwal had a forgettable first half where he remained pointless but bounced back in the second half to contribute 7 points in the triumph.