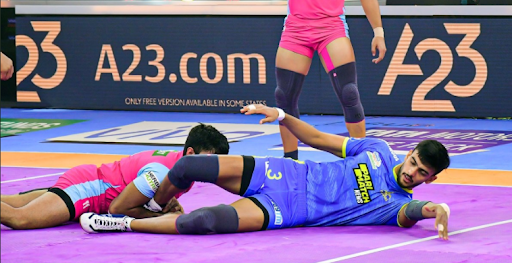 The Tamil Thalaivas and Jaipur Pink Panthers fought off to a 31-31 draw at the end of the final whistle in the 58th fixture of the Pro Kabaddi League season 8. Tamil Thalaivas will be disappointed with how the game ended, as the team gave away their two-point lead in the last minute of the game, in a super tackle situation.

Manjeet was the star of the show tonight for the Thalaivas as the raider picked up nine points for his side. He received great support from his defense tonight as his side picked up a total of eleven points in defense. Skipper Surjeet Singh picked up a thigh five against the Panthers, including an outstanding super tackle against Arjun Deshwal.

On the other hand, skipper Deepak Niwas Hooda had an off day for his side as he failed to impress tonight. Deepak just picked up three points in the entire game, which does not go along with a player of his stature. Jaipur’s ace raider, Arjun Deshwal picked up six points for his side but wasn’t able to take the Pink Panthers over the finish line.

Surjeet Singh was rock solid in the defense for Thalaivas picking up five points in the game, including a great super tackle on Arjun Deshwal. The skipper was aptly supported by Sagar and Sahil Singh as the duo picked up seven points for their side. The Thalaivas have been great in defense so far in the season and will hope that their defensive unit keeps up the momentum in the upcoming games.

The game started slowly between both sides, as raiders from both teams did not take risks early in the first half. Manjeet picked up the pace in the final ten minutes of the first half, scoring a super raid, giving his side an advantage leading into the second half. 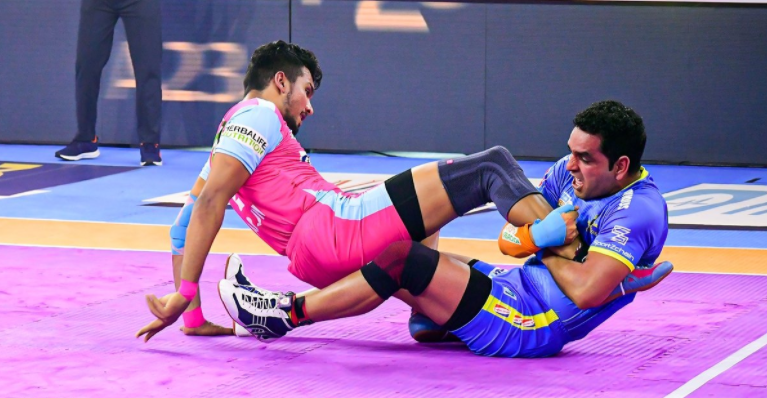 However, the match took a turn in the final raid of the game, as Manjeet went for a do-or-die raid in a super tackle situation, with Thalaivas leading by just two points. The raider went for a running hand touch on Shaul Kumar and stepped inside the lobby claiming a touch on the defender.

The match officials however were not moved by his gesture and deemed the raider out, giving two points to the Jaipur Pink Panthers. The Thalaivas were extremely dissatisfied with the decision but could do nothing but complain due to the lack of reviews remaining.

The Thalaivas will be hoping to find a win in their upcoming game. The side has tied five of their games so far this season. The Pink Panthers, on the other hand, will be happy with the draw tonight as they managed to hold on to their unbeaten run in the middle half of the season.