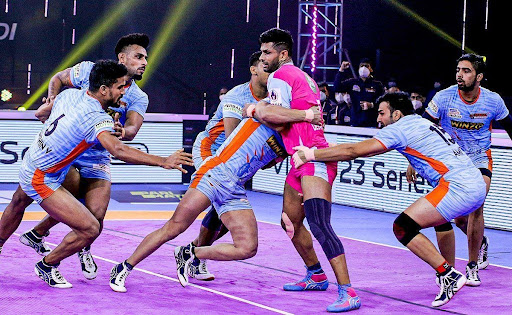 The Bengal Warriors snapped their three-game winless run in the PKL 8 as they defeated the Jaipur Pink Panthers 31-28 in Match No. 30 on Monday. The duo of Mohammad Nabibaksh and Maninder Singh combined viciously for a ‘Super Tackle’ in the buzzer raid to give the defending champions the much-needed win.

The Bengal Warriors broke the deadlock in their first raid after Maninder got a running hand touch on Nitin Rawal’s thigh. Jaipur responded with a touchpoint of their own as Deepak Niwas Hooda escaped from a tackle attempt.

Maninder got a running hand touch and escaped a ‘dash’ attempt from another defender to bag Bengal’s first multi-point raid. Jaipur was down to three men when Mohammad Nabibaksh got out of the grip of two defenders before crawling his way past the midline to deepen Jaipur’s wounds.

In the 8th minute, the Warriors defenders circled Deepak Niwas Hooda like a pack of wolves to inflict the first All Out of the game and take the lead at 10-5.

The highlight of the match came moments later when Maninder hurled a defender using his brute upper body strength while bagging another touchpoint and bonus to complete a ‘Super Raid.’ Jaipur replied with a Super Raid of their own when Nabibaksh and Amit Narwal couldn’t contain their excitement and gifted two feeble touchpoints to Arjun Deshwal.

Shaul Kumar initiated a double-thigh hold on Maninder to restrict him to the bench for the first time. However, the latter had the last laugh after the former tried an advanced block near the midline and gifted him a touchpoint as the scoreline favored the Bengal Warriors 18-14 at the break. 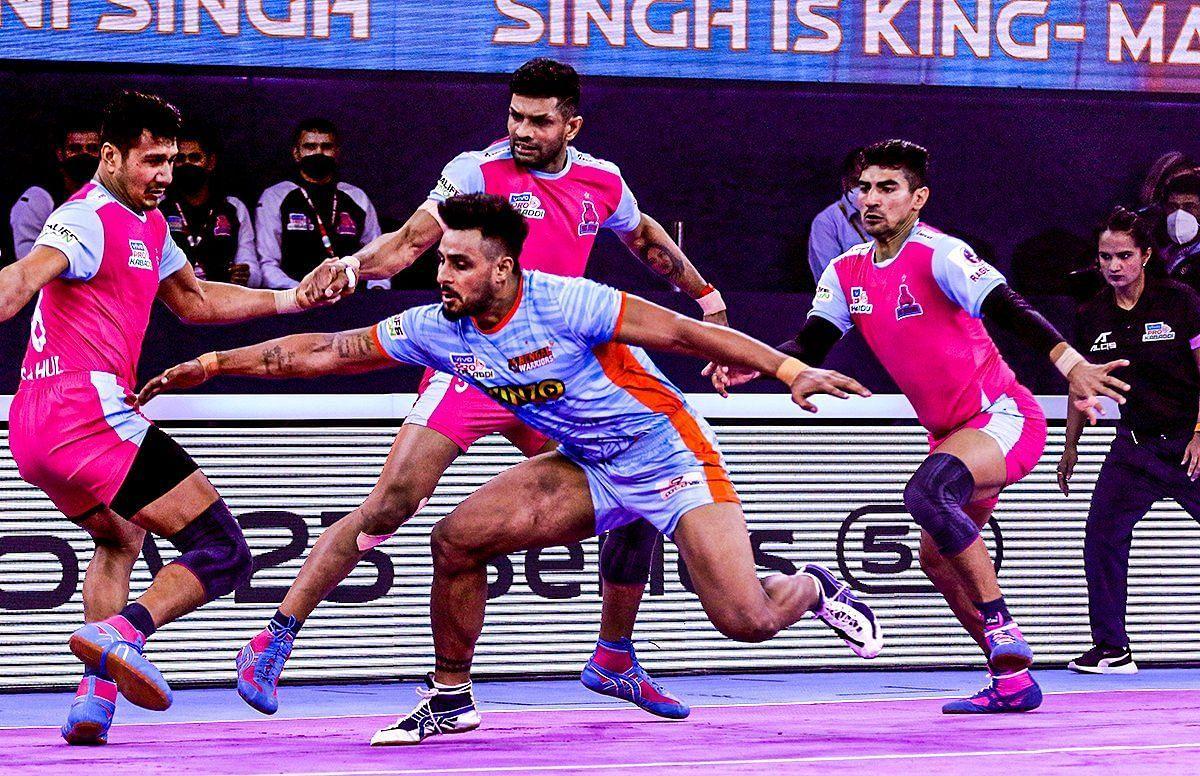 The second half began with controversy straight away when Deepak Hooda wanted a review for a bonus but Maninder began his subsequent raid beforehand. The latter scored a touchpoint against Nitin as both captains engaged themselves in a heated battle.

Jaipur was presented with a glimmer of hope through a ‘Super Tackle’ when Deepak Singh launched an ankle hold on Maninder during his Do-or-Die raid and two more bodies piled on him. The lead was ultimately narrowed to one point after Arjun got a chest touch on Amit Nirwal and Bengal found themselves down to only two men.

However, Nabibaksh pounced on Deshwal’s ankle from a crouching position like a cheetah before Maninder assisted him by grabbing the Jaipur raider’s upper body to tackle him in the buzzer raid of the contest.

The Bengal Warriors leapfrog to the fifth position in the points table with 16 points from 6 matches with the victory. The win will massively boost the defending champions’ morale and they will be eager to build on it when they take on the tenth-placed Haryana Steelers on Friday.

Jaipur Pink Panthers, on the other hand, find themselves on a mini two-game losing streak after winning all of their first three matches. The ninth-placed team will take on the fifth-placed Bengaluru Bulls on Thursday.