Two-time runner-ups Gujarat Giants will lock horns with Haryana Steelers in Match No. 28 of the PKL Season 8 at the Sheraton Grand Whitefield Hotel and Convention Center in Bengaluru on Sunday.

Both teams require a victory, albeit for different reasons. Gujarat Giants occupy the fifth spot in the points table as of this writing and a win could propel them into the top four. Steelers, on the other hand, is languishing in the tenth spot in this 12-team league tournament. They need to get the upper hand to come out of the bottom pile.

What has dented Gujarat’s chances this season is their ability to not finish matches properly. They have two draws to their name against Dabang Delhi and UP Yoddha. Their only victory in the league came in their first match against Jaipur Pink Panthers.

Haryana has the third-highest number of raid points in the season, having amassed a staggering 90 points from that avenue in four matches. They also have the second-most number of tackle points (43) in PKL Season 8 so far.

Gujarat Giants kicked off their season with a commanding 34-27 win over Jaipur Pink Panthers. Girish Ernak’s seven tackle points were the highlight of the match. However, they went off track in the next game as they suffered a 28-31 loss to Bengal Warriors.

In their third PKL 8 encounter, Giants played out a 24-24 draw against Dabang Delhi. They failed to cross the finish line against UP Yoddha as they shared the spoils in a 32-32 tie. Rakesh Narwal was their savior as he combined to collect 22 raid points in their last two matches.

Haryana Steelers have been guilty of losing matches by narrow margins. They lost their first two encounters by 39-42 and 38-40 score lines to Patna Pirates and Jaipur Pink Panthers respectively.

However, they returned with a 39-37 victory over the Telugu Titans before losing handsomely to Bengaluru Bulls by a 14-point margin.

Haryana Steelers lead the head-to-head record having notched up five victories against Gujarat Giants. The latter has won just two matches while one encounter ended in a draw.

Jaideep Dahiya: Haryana will be relying on the defensive prowess of debutant Jaideep Dahiya, who has the highest tackle points (15) in PKL Season 8 so far. His partner-in-crime Surender Nada has 14 tackle points to his name and the duo will be eager to thwart the raiders of Gujarat.

Rakesh Narwal: Giants’ raider Rakesh Narwal has 40 points to his name and is their lead raider. While surging forward, he can expect some help from Rakesh Sungroya as well. 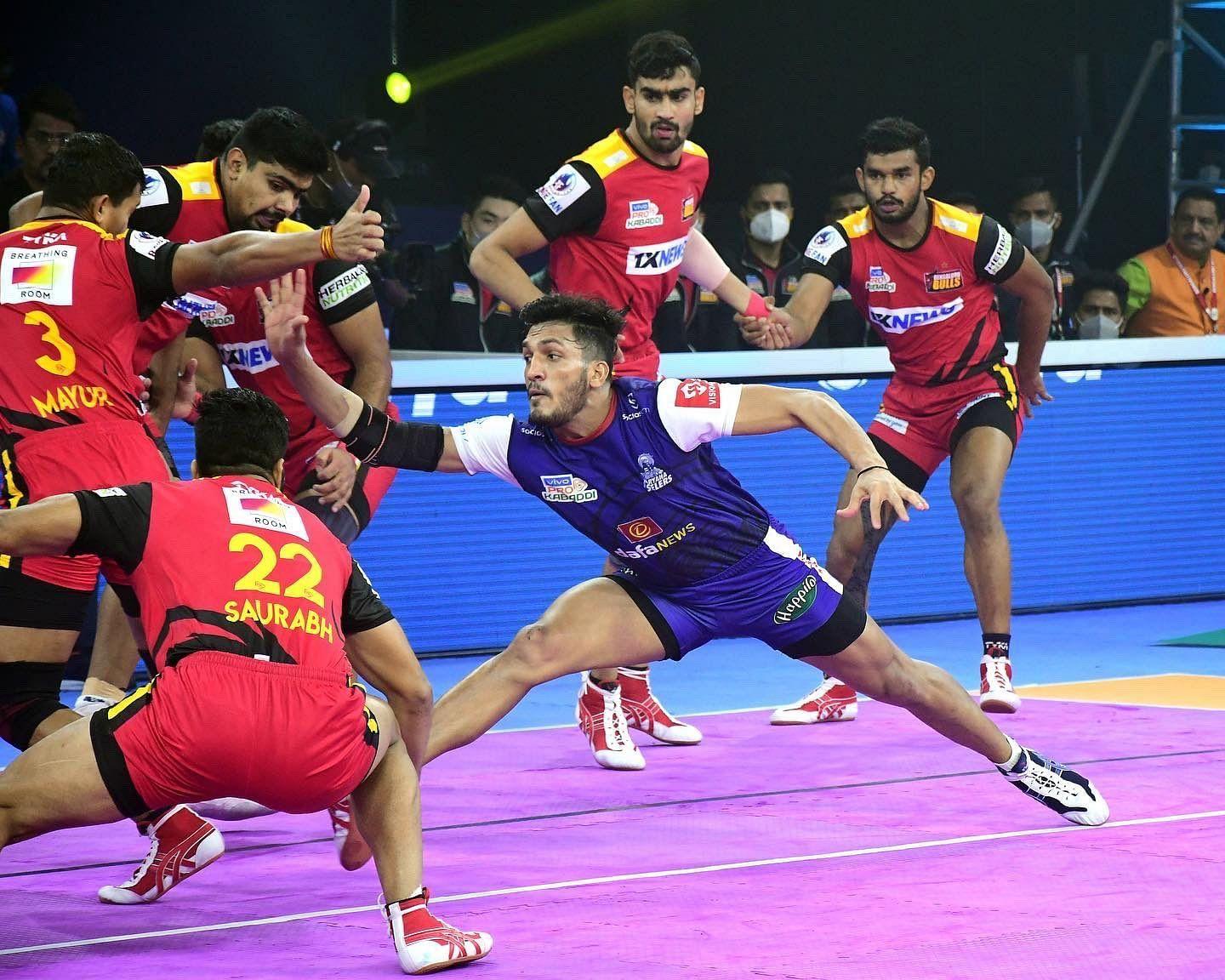 Haryana Steelers in action against Bengaluru Bulls earlier in the season

Haryana Steelers is the only side against whom Gujarat Giants have an overall win percentage of less than 50%. The Steelers have a pretty strong defense and should be able to get the better of Gujarat Giants’ raiders. Hence, we predict a win for the Steelers.