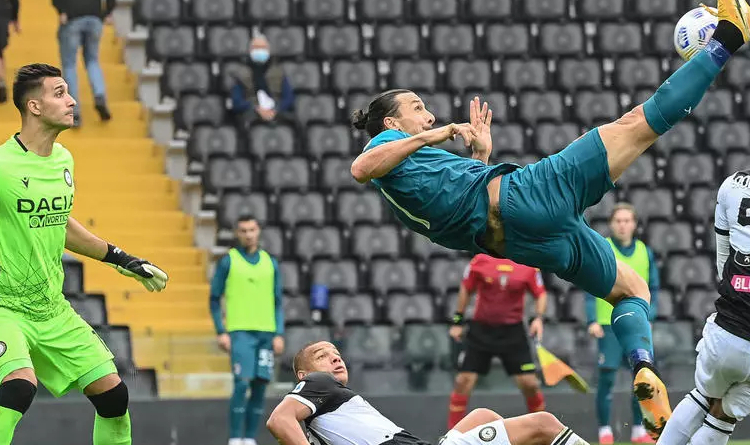 39-year-old AC Milan striker Zlatan Ibrahimovic reflects on his magic performance against Udinese in Serie A with a cryptic message suggesting his potential return to international football.

On Sunday, AC Milan took the lead in the 18th minute through Franck Kessie’s goal before Udinese’s Rodrigo de Paul levelled the scores from a penalty spot just after half-time. Stefano Pioli’s side snatched a victory when Zlatan found the net with a bicycle kick seven minutes from time.

Ibra’s late winner at Stadio Friuli means he has scored in every Serie A fixture so far. The Swede is currently the league’s top scorer with eight goals. Remarkably, five of them were scored after Zlatan’s recovery from COVID-19, which took him a month. With three assists, he has contributed to 10 goals scored by Pioli’s side this season.

The player has now scored in five consecutive Italian league matches for Milan on two occasions. Rossoneri’s former ace Andriy Shevchenko was the only one to achieve that feat for the club over the period of the last 25 years.

The striker’s comment on his performance was as stylish as the goal itself:

‘Why run when you can fly’ Zlatan wrote on Twitter after 2-1 win over Udinese in Serie A.

On Monday, he published a picture of him wearing Sweden’s international side shirt. Four years after international retirement, Ibrahimovic could now be set for a comeback:

Ibrahimovic has retired from the international team after the Swedes exited Euro 2016 with one point from three games at the group stage. Sweden’s former captain has scored 62 goals in 115 appearances.

“Ibrahimovic said no to the national team. He was not going to be in the team after the European Championship, and I respected him. If you rejected the team, I do not think you should come back. I respect what he said and those who said ‘yes’.”

Sweden next plays against Denmark in a friendly game on November 11. On November 14 and 17, Andersson’s side will face Croatia and France in the Nations League. The head coach hasn’t revealed his selection for upcoming fixtures yet.