Was Messi row a watershed moment for Setien’s career at Barcelona? 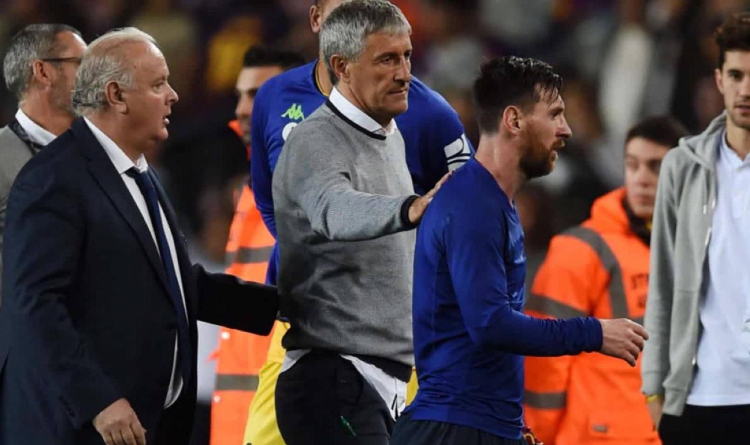 In August, Quique Setien left Barcelona FC after just eight months in charge at the club. According to Mundo Deportivo, the former head coach was in a heated conversation with striker Lionel Messi during Blaugrana’s poor performance in June.

During his first month in charge, Setien broke with Barca’s 7-year tradition and failed to go into the Copa del Rey final after conceding a goal from Atletico Bilbao on added time.

Barcelona’s La Liga title ambitions were yet another disappointment. Despite being on level points with Real in January, Setien lost control of the title race and finished the campaign five points behind Los Blancos.

The last straw for Barcelona board was the shocking 8-2 defeat to Bayern Munich in the Champions League quarter-final. The most accurate to sum up Setien’s era was Gerard Pique. In his honest assessment, the defender said that his team ‘have hit rock bottom’.

Setien reportedly didn’t see eye-to-eye with Lionel Messi during his spell at the club. Statistic-wise it was hard to complain about the Argentine’s performance as he netted 31 goals in his 44 appearances last season.

Last week the Spaniard provided details on his dissatisfaction:

“There are players that aren’t easy to manage, and Leo is one of them. He’s the best player in history and who am I to try and change him as a player? It’s not just the player that you have to manage, there (is) another side and that is much more complicated”,

According to Mundo Deportivo, it was Messi who questioned Setien’s approach. Messi criticized his head coach’s vision on tactics after 2-2 draw in La Liga clash with Celta Vigo in June. The six-time Ballon d’Or winner reportedly blamed the coach for having an inappropriate attitude to the players whose trophy collection is bigger than his.

‘If you don’t like what I said, you know where the door is,’

Setien reportedly responded to the Argentine.

Given the amount of power Messi has at his home club, the conversation could have been a deal-breaker for Setien, who was replaced by Ronald Koeman on August 17. Later that month, Camp Nou’s unofficial shareholder Messi was still unhappy, setting to leave the club after 20 years.

After a few days the 33-year-old agreed to stay for the final year of his agreement. The Argentine slammed president Josep Bartomeu, who ended up resigning last week.

Bartomeu’s resignation is expected to become a breath of fresh air for Ronald Koeman’s side as their six points after six La Liga games mean they are going through the worst start to a domestic league in 18 years. After a 1-1 draw with 10-men Deportivo, Barca currently languishes in 12th place in the table.