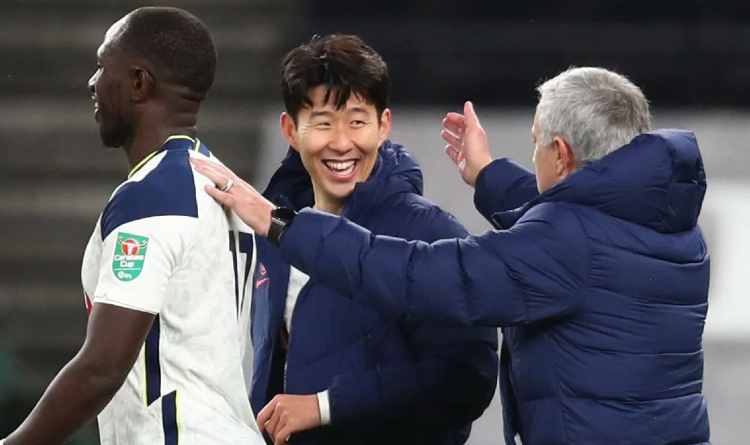 Tottenham’s boss Jose Mourinho is set to maintain his personal record as Spurs beat Championship side Brentford 2-0 in the Carabao Cup semi-final.

Moussa Sissoko and Son Heung-min claim spot in the Carabao Cup final for Tottenham to get a chance to secure the club’s first trophy victory since 2007-08 season.

The hosts made a bright start with Moussa Sissoko heading Sergio Reguilon’s perfect cross into the top corner inside the opening quarter of an hour. Brentford, who beat four Premier League teams in their famous way into the semi-final, couldn’t afford to give up this early. After missing a couple of half-chances before the half-time, Thomas Frank’s side managed to equalize in the 65th minute thanks to Ivan Toney’s header. But the goal was disallowed as the striker’s knee was ruled slightly offside.

Spurs midfielder Tungay Ndombele played a massive role in defence over this period of the game at Tottenham Hotspur Stadium. The 24-year-old hardly got positive feelings last week, when Mourinho claimed that he isn’t good enough physically to play the entire 90 minutes. However, the Frenchman proved him wrong with the defensive performance and the crucial assist to Son Heung-min after 70 minutes. South Korea’s captain took away the hope from Brentford scoring his 101st club goal a couple of hours after being named the best Asian football player of 2020. Ndombele, though, hasn’t been substituted just for the third time this season.

Frank’s side finished the match with ten men as the midfielder Josh Dasilva got a straight red after a tackle on Pierre-Emile Höjbjerg. Despite getting a gruesome-looking shin injury, the 25-year-old was determined to return on the pitch, but Mourinho insisted on the substitution. Both Dasilva and Höjbjerg showed pure class after the match:

Mourinho, in turn, expressed his excitement about the whole Frank’s group who are currently on the fourth spot in the Championship table:

“We didn’t play brilliantly, sometimes wrong decisions, sometimes one more touch, not with that soft control that allows you to play fast but the game is always under control against a team that will probably be in the Premier League next year.”

Asked about the chances to win the Carabao Cup final, the Portuguese said:

“The final is now in a pocket for three months, we have to wait for the final so we have to focus on what we have coming up. We have the FA Cup, the Premier League, the Europa league, so let’s forget the final for now. But when April arrives we have to be ready and to fight for the trophy”.