Stimac fielded an attacking team for this match, sticking to his 4-3-3 formation. Owing to visa delays, Sandesh Jhingan and Chinglensana Singh arrived late in Vietnam and were not ready to feature today. Youngsters Jeakson Singh and Narender Gehlot got a chance in the starting XI alongside Anwar Ali, Naorem Roshan Singh, and Akash Mishra forming a young defense.

Singapore looked threatening in the initial exchanges, but the first major chance fell to India in the 6th minute. Skipper Sunil Chhetri played a pass for Anirudh Thapa, who then found Liston Colaco with a subtle touch. However, the winger could only find the side-netting with his shot.

Singapore’s first chance came in the 15th minute when Fandi launched a shot, but young centre-back Anwar Ali made a stunning goal-line block. Three minutes later, it was Colaco’s turn to have another attempt, but goalkeeper Hassan Sunny came to the Lions’ rescue. Incidentally, this was the 100th international appearance for Sunny.

BF Pathum United’s Fandi looked menacing and had another attempt in the 23rd minute, but this time around, he was denied a goal by the Indian goalkeeper, Gurpreet Singh Sandhu. India should have taken the lead in the 30th minute when from a corner, Gehlot found himself completely unmarked, but he somehow failed to connect.

India had gained control of the game, but against the run of play, Singapore scored the opening goal in the 37th minute. Fandi’s freekick caught a deflection, and though Gurpreet did well to change his orientation and put in a dive, he could not prevent the ball from going into the back of the net. 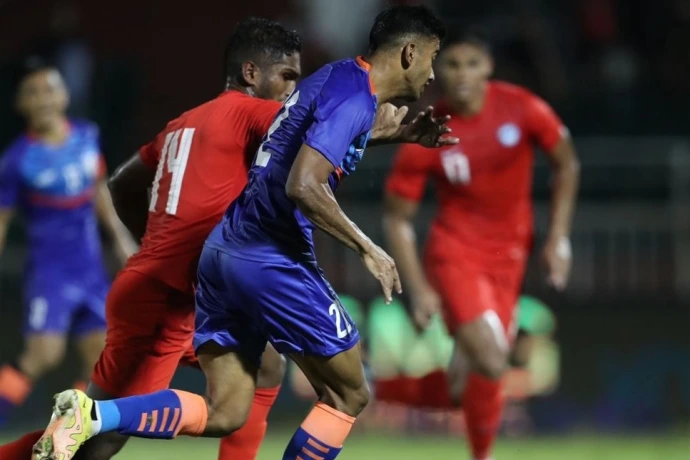 India, however, took all but six minutes to restore parity in the match. Chhetri found Kuruniyan with a defense-splitting pass, and the ATK Mohun Bagan winger did well to beat the Singaporean skipper.

He could easily have scored his second goal just four minutes into the second half when he found himself at the end of a cross from Anirudh Thapa, but this time around, Sunny was not ready to let his guard down.

The Lion City Sailors man came to his team’s rescue once again at the very next minute. From a corner, Chhetri did brilliantly to make space for himself and then guide a header towards the goal, but Sunny denied the Indian skipper his 85th goal for the national team.

With the usual plans not paying dividends, Sahal Abdul Samad went for glory just after the hour-mark, but his shot was blocked by a Singaporean defender. In the 75th minute, Colaco launched a shot and his effort had beaten sunny, but besides that, it also missed the target by a few inches.

Five minutes later, Udanta Singh had an attempt, but one of Nishigaya’s defenders came up with another impressive block. Thapa could consider himself unlucky, and in the 87th minute, he came up with another fantastic pass for Ishan Pandita, but the Jamshedpur striker skied his shot. The Blue Tigers launched one attempt after another in the last few minutes, but Nishiyaga’s defense was too resolute to be broken down.

With this win, Singapore finishes in the third position, while India is in second place. Stimac’s men will now take on hosts Vietnam on Tuesday. Chhetri & Co. will need to win this match to get their hands on the trophy, as a draw will be enough for Vietnam.