Kerala Blasters sucked punched NorthEast United in their own den and handed Marco Balbul’s side their fifth consecutive loss in as many games. The first half of the match was a dull affair but the visitors came alive in the second half to outclass the Highlanders.

The first chance of the match fell to Romain Philippoteaux who rattled the crossbar after a brilliant solo run, beating a couple of defenders along the way.

Rahul KP won his side a free kick in the 16th minute after some good work down the left flank, but the Blasters failed to make it count. After a corner kick, Ivan Vukomanovic’s risked being caught on on a counter, but despite Jithin Madathil Subran’s lung-bursting run from one end of the field to the other, he was unlucky to give away a goal kick to their opposition. Some half chances and both sides fiercely competing for the ball was the story of the first half hour.

Has to be said that coach Balbul had worked on his team’s defensive shape, they defended very well, and after losing four games so far. It was a cagey first half with neither side willing to give away an inch. The visitors began the second half on a positive note, Saurav Mandal was hacked down in a dangerous position but they failed to test Mirshad Michu from the resulting free-kick.

Subsequently, Emil Benny tried to test Gill but in the end, his effort went narrowly wide to show some positive intent from NorthEast as well. Ten minutes after the restart, the Tuskers’ persistence paid off, as they had the ball in the back of the net. 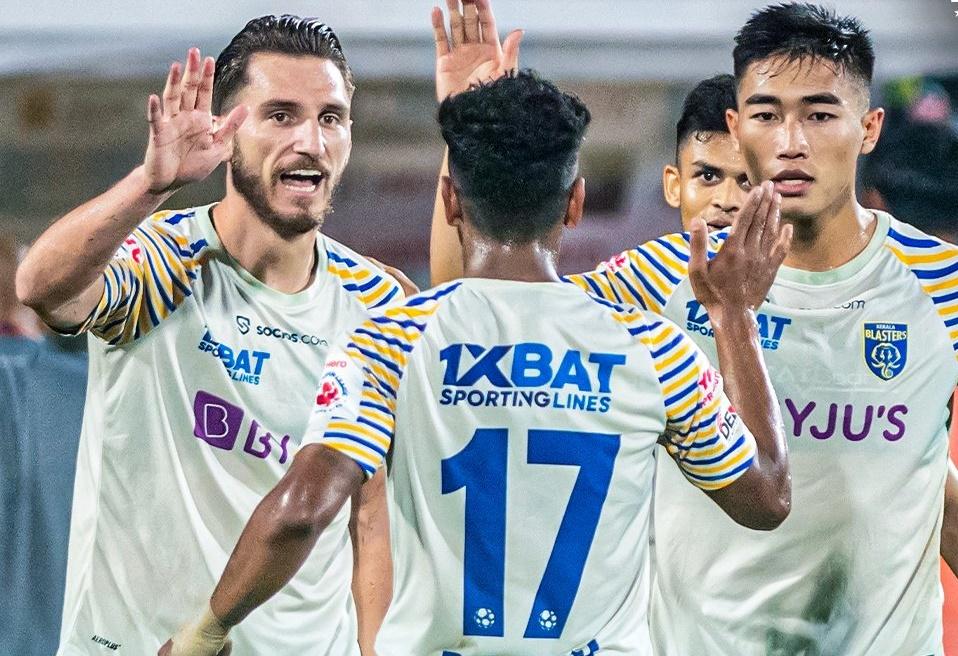 Rahul proved to be the difference maker as he fed Saurav who drilled in a cross and Diamantakos was there to finish with aplomb. It was the first-ever goal in ISL from the Blasters’ forward, getting off the mark in the ongoing campaign.

The Highlanders had a great chance to pull level in the 71st minute, as Aaron’s cross almost crept into the goal only for Gill to trot backwards and push it over the crossbar for a corner.

The hosts had two further golden opportunities near the 80th-minute mark. It was a great ball from the right flank from Joe, but Imran failed to get proper contact. A minute later, Derbyshire fed Emil with an inch-perfect ball, but the latter rounded up the keeper only to get pushed away from the goal, failing to make the chance count.

They would be punished for that poor finishing in the 85th minute. Rahul once again the dangerman, was released down the right flank by Giannou and the former played a great cross to Sahal, who buried the chance to mark his record 77th appearance in the famous yellow shirt with a goal.

Balbul’s side came into the fixture with a defensive first approach, but after conceding the goal, they found it difficult to get going on the front foot.

Six minutes were added on by the referee, although the home side was on the back foot for the majority of the added time. Puitea was introduced into the fray by the visiting team and he created almost an instant impact but his shot is just inches away from the target!

Rahul himself could have gotten his name on the scoresheet as he was through on goal deep into the stoppage time but his first-time effort sailed over the crossbar with the goalie charging in.

However, the Blasters were not done yet and they would further compound the home side’s miseries as they added another goal in the last minute of play. Sahal completed his brace after he finished from six yards following some more good team play down the right wing.

NorthEast United could muster up just a single shot on target, leaving them rock bottom still without any points after five games.