Portugal vs Ghana: Preview and Prediction

FIFA World Cup 2022 began on Sunday and there have already been some thrilling games, lots of goals, and plenty of memorable moments. Cristiano Ronaldo-led Portugal will kick-start their campaign in Group H against Ghana at Stadium 974, Ras Abu Aboud in Qatar on Thursday.

Much of the talk surrounding the Portuguese camp has been dominated by Ronaldo’s explosive interview that he gave to Piers Morgan, making some stunning revelations about Manchester United, coach Erik Ten Hag, and players of past and present. Fernando Santos’s men will be eager to not get distracted by that and stay focused on the task at hand by picking up a win but they face a tricky opponent.

The Black Stars have a young-looking side and they recently defeated Switzerland 2-0, which would give them great confidence. Having defeated Nigeria 4-0 in their pre-World Cup friendly, A Selecao ensured that they had the perfect preparation for the big stage, albeit Ronaldo missed the game due to a stomach bug, but is expected to be fit for their opening group game.

Santos’s men have been impressive en route on their road to the World Cup, albeit they can be mediocre on certain days.

They finished second in their World Cup qualifying round, behind Serbia, and thus had to face off against North Macedonia in a playoff game. A brace from Bruno Fernandes was enough to seal his nation’s berth at the global spectacle, keeping intact their record of reaching every World Cup finals since missing out in 1998.

The Euro 2016 champs won three Nations League games in the lead-up to World Cup but also endured defeats against Spain and Switzerland.

On the other hand, Otto Addo’s side reached the World Cup in the most dramatic of circumstances. They topped their respective group G in the second round qualifying, and thus squared off against arch-rivals Nigeria in the third round play-off.

They pipped the Super Eagles on away goals, surviving some late scares but doing just enough to qualify for their first World Cup finals since 2014, having missed the spectacle back in 2018.

The Black Stars will be hoping to replicate the heroics of 2010 when they reached the quarterfinals but bowed out on penalties after the infamous Luis Suarez handball episode.

These two teams have faced each other just once before, at the 2014 World Cup in Brazil, in the group stage with the Portuguese side winning the game 2-1.

John Boye’s own goal gave Ronaldo’s side the lead before Asamoah Gyan brought his side level but an 80th-minute winner from the ex-Real Madrid man won his side the game but the result saw both sides being eliminated in the group stage itself. 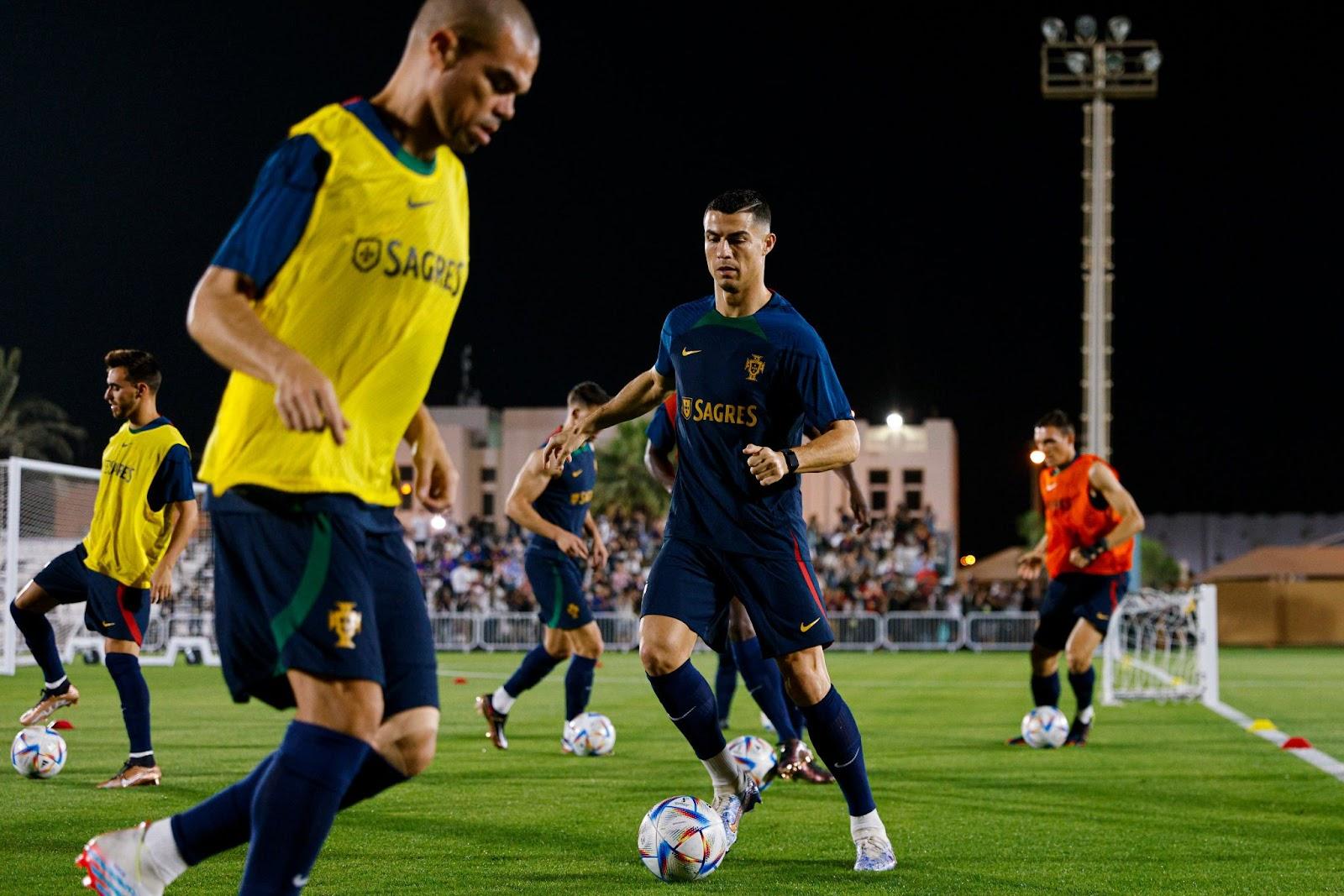 Since Ronaldo was absent for the Nigeria friendly, Santos switches to a more-orthodox 4-4-2 with Joao Felix and Andre Silva leading the line, but for their Group H opener, he may yet to tempted to revert back to the 4-3-3.

Goalkeeper Rui Patricio is a certain starter in goal, and the veteran custodian will be protected by a back-four featuring Joao Cancelo, Ruben Dias, Pepe, and Nuno Mendes. William Carvalho will be tasked to do the dirty work in the midfield, while the likes of Bernardo Silva and Bruno Fernandes will be expected to provide service to the lethal-attacking trio of Andre Silva, Rafael Leao, and Ronaldo.

As far as Otto’s side is concerned, they will be playing their strongest eleven featuring Lawrence Ati-Zigi in goal. Tariq Lamptey, Daniel Amartey, and Mohammed Salisu are also certain starters, but there could be a battle between Baba Rahman and veteran John Mensah at left-back.

The Ghanaian coach may yet opt for the former keeping in mind the pace of their opposition forwards. Arsenal midfielder Thomas Partey was rested against Switzerland but is expected to start alongside Salis Abdul Samed in the middle of the park. Daniel Afriyie, Andre Ayew, and his brother Jordan Ayew will be tasked to provide service to the lethal Inaki Williams.

With superstars in both teams, expect an entertaining affair, with goals guaranteed, however, the Portuguese side may just edge out the Black Stars given their experience on the big stage. However, they will be wary not to underestimate their opponents and will hope to shut down the noise surrounding unrest in the camp after Ronaldo’s explosive interview.