Odisha go top with a deserving 1-0 win over Bengaluru 

Odisha secured their third victory of the 2022/23 ISL season

Odisha secured their third win of the 2022-23 Indian Super League season on Thursday as they handed Bengaluru a 1-0 defeat at the Kalinga Stadium. Nandhakumar Sekar scored the solitary goal of the match.

Though his team had won the previous game, Odisha head coach Josep Gambau made one change to his starting XI. Vastly experienced midfielder Raynier Fernandes returned to the team as Thoiba Singh made way for him.

Bengaluru head coach Simon Grayson, on the other hand, tweaked his formation. In an attacking move, defender Alan Costa was sacrificed for striker Roy Krishna, while Leon Augustine came in place of Javi Hernandez.

Odisha had the better start and could have taken the lead as early as the second minute when Mauricio threaded a pass for Jerry Mawihmingthanga. However, the winger’s shot was saved by the Bangaluru custodian, Gurpreet Singh Sandhu.

Bengaluru’s first attempt came in the seventh minute when Krishna received a ball played from the deep and found him in space, but his effort struck the side netting. Defender Namgyal Bhutia also went for glory a couple of minutes later, but he was not successful in his endeavor either.

Krishna had yet another opportunity in the 22nd minute when Brazilian midfielder Bruno Ramires played a pass for him. The Fijian goal machine did well to intercept the pass, but before he could launch a shot, Odisha’s goalkeeper Amrinder Singh made a stunning outing to prevent the impending danger.

The momentum swung like a pendulum, and just before the half-hour mark, it was Odisha’s turn to squander an opportunity. Saul Crespo found Mauricio unmarked with a delightful ball, but the Brazilian’s effort lacked precision.

However, Gambau’s team did not have to wait long for the opener, as Nandhakumar delivered something magical in the 33rd minute. Sahil Panwar’s corner was cleared by a Bengaluru player, but the ball fell kindly for Nandhakumar, whose brilliant shot smashed into the bottom right corner.

Following the goal, the first half did not yield any other notable opportunities, but Odisha could have doubled their advantage only three minutes into the second half. Mauricio played a ball for Jerry, who then delivered a good cross into the box, only to discover that none of his teammates was on the same wavelength.

Though the Blues did their bit to restore parity in the match, Odisha had much better quality in the final third. In the 66th minute, Jerry struck yet another powerful shot, and once again, Gurpreet had to come to the visitors’ rescue. 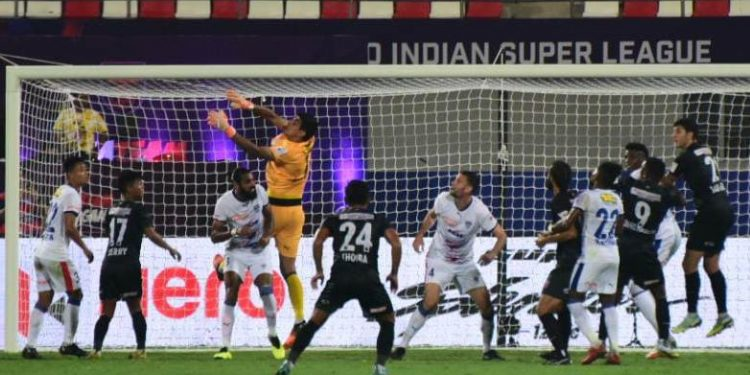 The scoreline could have been worse for Bengaluru, had it not been for their goalkeeper

It was then the turn of Fernandes to prove why he made it to the starting XI in the first place. His first attempt in the 72nd minute was not on target, but his second attempt in the 80th minute was. However, Gurpreet made yet another important save to keep Bengaluru’s slim hopes of a comeback alive.

Though Gambau’s team created all the major openings, Bengaluru had a couple of chances just a few seconds before the full-time whistle. A corner from Bhutia found Krishna’s head before it seemingly took a deflection to go out for another corner. However, this time around an Odisha player was fouled, ensuring the Kalinga Warriors walk away with all three points from this fixture.

With this win, Odisha climbed to first place with 9 points from 4 matches. Their next match is against Hyderabad on 5th November, while Bengaluru, who is now in 6th position with 4 points, will have a long break before meeting East Bengal on 11th November.