Goa welcomed Odisha to the Fatorda Stadium on Saturday with the home side winless in their past two matches, while the visitors had won their previous three games.

It was a cagey affair till the break, but once Nandhakumar Sekar was sent off in the second half, Josep Gambau’s men were simply no match for the home side as they prevailed 3-0  courtesy of a masterclass from Noah Sadaoui.

The Juggernauts began the match on the front foot, Thoiba Singh and Saul Crespo combined to create a great chance from a throw-in for Narender Gehlot, but his long ranger was cleared away by Anwar Ali who was in the right place at the right time. They kept knocking at the door, however, the Gaurs were resolute, not allowing much penetration to their opponents.

The home fans nearly had their hearts in their mouths later as Nandhakumar tried to curl one in from the right wing, but it ended up clipping the upright with Dheeraj Singh in all sorts of trouble, but luckily for them, the ball went out of play. Carlos Pena’s men tried to progress the ball, but their opponents were pressing so well, that the home side struggled to create anything of note.

The visitors kept the ball really well, troubling the Goan outfit and not allowing them to build any sort of momentum. Shortly after the half-hour mark, Gambau’s men earned a corner, and Dheeraj came out to collect but couldn’t get to the ball, Crespo jumped the highest and took aim but his headed effort was stopped partly by Ayush Chhetri and partly by the goal post. 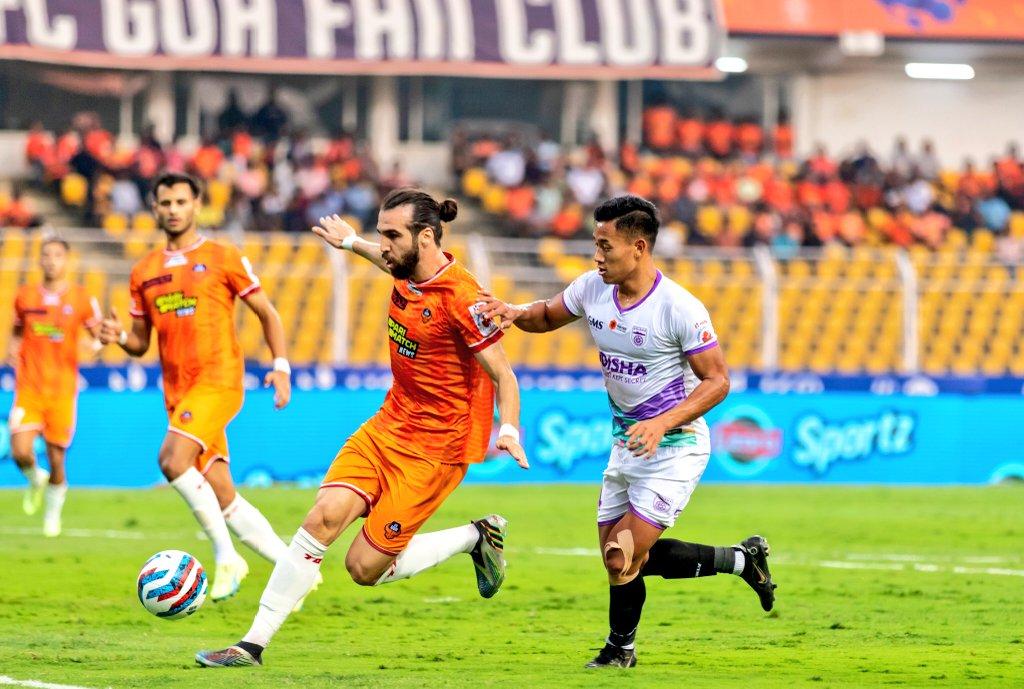 With the game still goalless, the best chance of the first half fell to the home side, as Brandon Fernandes unlocked the visitors’ defence with an inch-perfect through pass to Iker Guarrotxena, out came Amrinder Singh to foil the danger, but he could only send the ball back to Noah’s feet whose chipped effort sailed narrowly over the bar.

Shortly before half-time, Glan Martins fouled Jerry, and from the resulting freekick, Raynier Fernandes had a crack at goal but Dheeraj made a stunning save to keep the deadlock intact. Both teams cancelled each other out as the referee blew to bring an entertaining first half to a close.

The Juggernauts began the second half just as they did the first, a give-and-go between Nandha and Lalruatthara saw the latter try to sneak in Pedro Martin but again Dheeraj was alert to avert the danger. Pena’s words at the break did his team a world of good as they started to dominate possession a lot more, giving the visitors a taste of their own medicine.

Their persistence almost nearly paid off as Brandon released Alvaro Vazquez whose first-time cross nearly reached Noah but some last-ditch defending saved the day for Gambau’s side. Nandhakumar had gotten himself booked earlier in the first half for a silly challenge, but the winger was made to pay for when it when he lunged into Brandon and the referee had no choice but to send him off after he collected a second booking.

Noah continued to be a menace for the Eastern Dragons as the Moroccan got on the end of a through pass from Seriton and his cut-back was smashed into the roof of the net by Brison to break the deadlock.

Just four minutes later, they were two goals to the good as Brandon received a long diagonal, which he flicked into the path of Vazquez whose first-time effort rattled the post. Luckily for them, the ball stayed in, Amrinder came out to collect but it fell to Noah who smashed the ball into the back of the net to bring up his fifth goal of the campaign.

They could have added two more late goals with golden opportunities falling to the Moroccan and his strike partner but neither managed to divert their attempts goalwards. Amrinder came to his side’s rescue as he made an excellent one on one save from Guarrotxena who latched onto a chipped pass from Noah but couldn’t beat the keeper.

Pena’s men kept knocking and they would finally get the third goal as their two strikers combined, Sadaoui fed Alvaro and he blasted one past the helpless visiting goalie to seal all three points.

Up next, the Gaurs will host NorthEast United on Saturday, while the Eastern Dragons will lock horns with ATK Mohun Bagan at the Kalinga Stadium after a short break on Thursday.