Greg Stewart scored the second goal of the game

Mumbai City registered a stylish 4-0 win over Kerala Blasters in the Indian Super League. The Islanders put on a magnificent attacking display in the first half that saw them score four goals and also put on a resolute defensive performance in the second half to defeat Kerala Blasters.

Des Buckingham made one change to the starting eleven that won against Odisha away from home. Apuia came in for Vinit Rai in the Islanders’ midfield for the game against Kerala Blasters. Kerala Blasters meanwhile brought in Harmanjot Khabra, Victor Mongil, and Ivan Kalyuzhnyi for the Mumbai game in place of Marko Leskovic, Jessel Carneiro, and Apostolos Giannou.

The Islanders looked to start the game on the front foot and did so flawlessly. They scored their first goal of the game in the 4th minute to take the lead. Bipin received the ball in space on the left flank, He played a smart one-two with Greg and burst into the box. He got his shot away but it was straight at the Kerala Blasters goalkeeper who could only manage to parry the ball away. The ball however fell straight to Jorge Pereyra Diaz who stretched to get a touch on the ball ahead of the Kerala defender. He directed the ball into the right bottom corner to make it 1-0 very early on in favour of the Islanders.

The Mumbai City players were relentlessly pressing the Kerala team and were not allowing them any time on the ball. They had got into their attacking rhythm from the first whistle of the game, they looked certain to score a lot of goals in this game.

In the 10th minute of the game, they doubled their lead. Rostyn played a diagonal ball out to Chhangte on the right who controlled the ball expertly in space. Chhangte whipped in a delicious ball into the box towards an on-rushing Greg Stewart, who got off a superb glancing header that ended in the back of the net. The scores read 2-0 in favour of the Islanders as they looked like a complete team in the opening exchanges of the game. 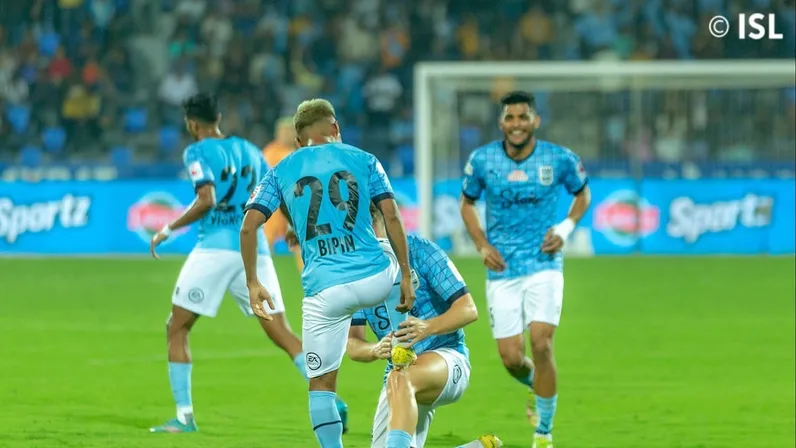 Before Kerala Blasters could realise what hit them Mumbai City scored their 3rd goal of the game in the 16th minute. Mehtab played an accurate pass to Jorge Pereyra Diaz who looked to combine with Bipin on the left flank. He cut it back smartly to the Islanders’ number 29 on the left side of the box. Bipin then curled the ball superbly into the right top corner from the edge of the box to make it 3-0 for the Islanders.

Some superb passing combination play between Greg and Jahouh right outside the Kerala box, saw Jahouh play an incisive through ball to Diaz. The Argentine had made his way inside the penalty area from the right side of the box and received the ball away from pressure inside the box and calmly slotted the ball past Gill in the Kerala Blasters’ goal as the Islanders had established an unassailable lead in the first half itself.

From the restart, the Islanders looked to continue their assault on Kerala Blasters. They carved out another chance for themselves in the 26th minute of the game. A spectacular long ball from Jahouh found Chhangte inside the right side of the opposition box. He set the ball up for Diaz with a cushioned header. Diaz unleashed a shot the first time which was blocked as the scores still read 4-0 in favor of the Islanders.

In the 43rd minute of the game, Des Buckingham was forced to make an early substitution as Greg Stewart had picked up a slight knock. He was replaced by Alberto Noguera in midfield as the Islanders looked comfortable with the 4-goal lead.

The Islanders kicked off the second half in the same fashion they ended the first, on the front foot.  They were eagerly looking for their fifth goal of the game. Mumbai City was dominating the ball and pushing the deflated Kerala Blasters players back into their own half from the restart.

The Islanders got the next chance of the game in the 63rd minute of the game. A sublime sequence of passes in the Mumbai City midfield saw the ball reach Bipin on the left flank at the end. He put in a low ball towards Diaz, who got a cheeky touch on the ball ahead of the Kerala Blasters goalkeeper.

The ball snuck under the keeper and was heading inside the goal before Jessel just got back in the nick of time to clear the ball off the line. His goal-line clearance made sure Diaz was denied his hat trick on the night against his former club.

Soon after, in the 77th minute, Kerala Blasters managed to create a chance for themselves. Bryce Miranda ran down the left wing and put in a great ball into the middle of the box to set up a shot for Giannou, which was bravely blocked by the outstretched leg of Mourtada Fall, to make sure Mumbai City kept their clean sheet.

Soon after the referee blew for full time and the game ended 4-0 in favor of the Islanders as they defeated the Tuskers thanks to a sublime first-half performance.

The Islanders will travel to Kolkata for an away game against ATK Mohun Bagan on Saturday at 7.30 PM IST while the Blasters enjoy a much-needed 14-day break as they face Goa next on 22nd January.