ATK Mohun Bagan played out a thrilling 2-2 draw with Mumbai City at the Mumbai Football Arena on Sunday. The Islanders were pegged back by a late-headed goal from Carl McHugh who scored for the first time in 3 years to steal a point for his side who were reduced to ten men.

It was a lively start from both sides as they looked to attack from the get-go. Des Buckingham’s side needed just four minutes to break the deadlock courtesy of Lallianzuala Chhangte’s screamer.

The former Chennaiyin winger scored a sublime goal from 30 yards as he smashed an unstoppable shot which rattled the crossbar before creeping in. It all started from a half clearance from the Mariners’ defence and Channgte latched onto it to unleash a stunning effort.

There was an instant chance at the other end for Juan Ferrando’s side as Liston Colaco came in flying to meet a cross that he headed onto the woodwork.

In the 10th minute, Chhangte tested Vaishal Kaith again from close range but the keeper reacted well to parry it wide. There was a good chance for Manvir Singh in the 14th who delivered a teasing cross that was well dealt with by the hosts.

Shortly after, Bipin Singh dance his way past a couple of players and put in a great cross which Jorge Pereyra Diaz headed but could not direct it goal wards as his effort sailed over the crossbar.

There was another chance for the Islanders to extend their lead, as Ahmed Jahouh sent a spectacular ball into Chhangte on the right flank. The India international managed to keep it alive and feed Greg Stewart, who skipped past defenders and delivered a shot on target, which was blocked by Kaith.

Hugo Boumous wasted a further golden opportunity. Manvir was sent through on the right flank by Ashish Rai, and he put in a decent cross after which Boumous dribbled past a few defenders but blazed his effort over the crossbar. The match became an end-to-end affair as it headed towards the end of the first half.

The Mariners had a great chance to level, Liston was sent through on goal but Dimitri Petratos fired wide of the mark, with the goal gaping. Another great effort from the home side towards the end of the half as Stewart gave the ball to Bipin who cracked an effort that Kaith saves to keep his side within touching distance.

Ferrando’s men tried to take the initiative after earning a free kick but nothing of note resulted from it. They earned a corner which was directed towards the goal but Lachenpa was alert to it and made a good save.

The Mariners subsequently made a change as Lenny Rodrigues replaced Deepak Tangri. Diaz’s night came to an early end as Buckingham sent Alberto Noguera on. Colaco was also replaced by Ashique Kuruniyan.

There was plenty more drama as Rostyn Griffiths put the hosts ahead. He rattled the crossbar after getting on the end of a teasing cross from Jahouh, the ball bounced off the turf and despite Lachenpa’s best efforts to keep it out, Griffiths got to the ball first and nodded in. 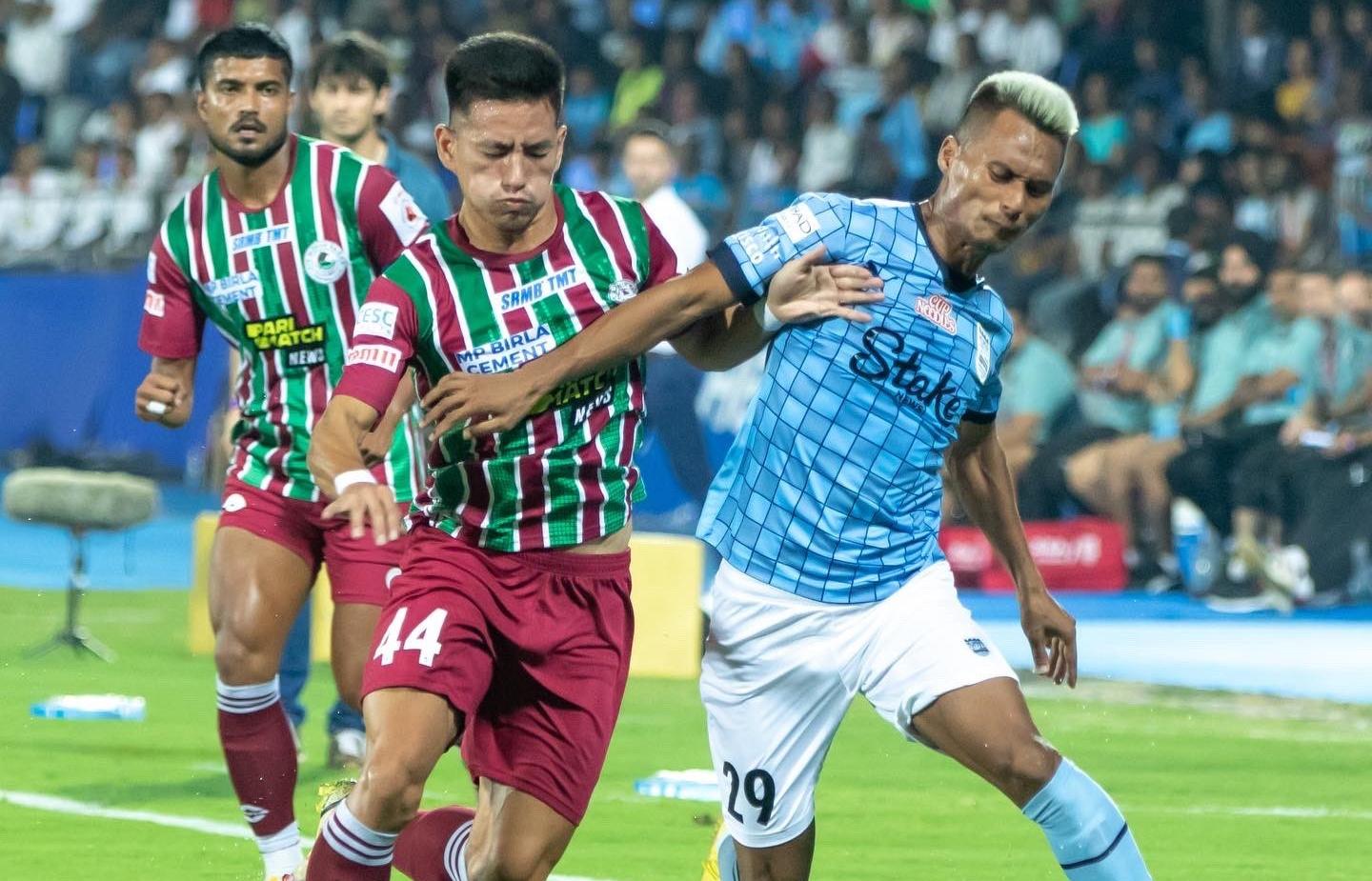 The visitors were then reduced to ten as Rodrigues was sent off for deliberately kicking Stewart from behind after a tussle between them. Stewart went close again with a free-kick that rattled off the woodwork and bounced away.

Ferrando’s side kept persisting and their persistence paid off when McHugh found the back of the net with a looping header from a free-kick to stun the home crowd. It was a great delivery from Petratos that got the club from Kolkata back on level terms in the 89th minute.

Buckingham’s side was denied a lead by Kaith as he dealt well from a header and then an acrobatic effort from Rostyn. The Mariners themselves could have taken the lead as Ashique drilled in a teasing cross in added time which was met was Petratos who somehow struck the crossbar and the ball fell kindly into the hands of a grateful-looking Lachenpa.

There was another great chance for the Islanders to steal all three points right at the death, Noguera’s low-driven effort from outside the box hit the post and Vikram Singh’s follow-up was off target. Both sides shared the spoils after an entertaining affair which perhaps fittingly ended 2-2.

ATK Mohun Bagan faces NorthEast United on Thursday and will be hoping for a win that propels them into the top four before Mumbai City faces Chennaiyin on Saturday.