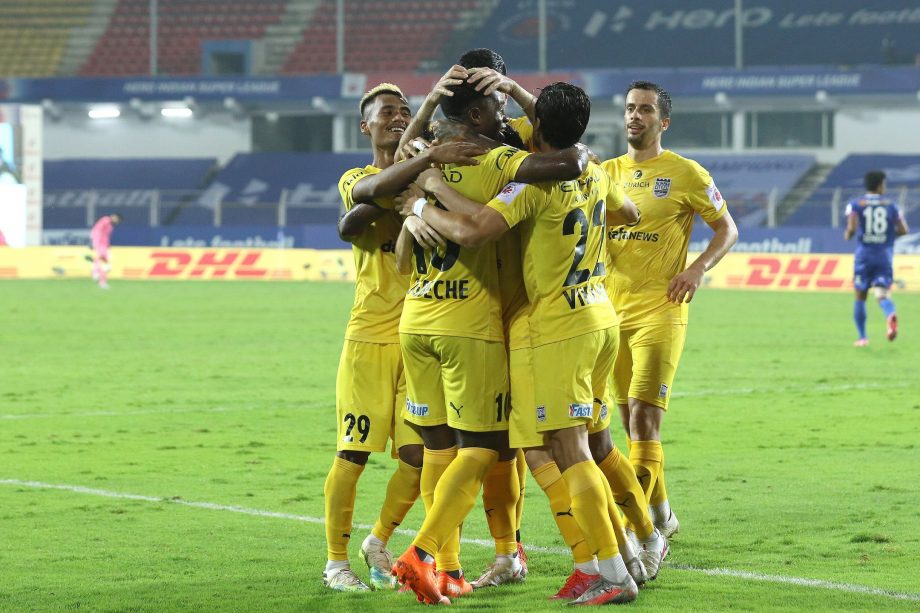 Going into Matchday 10, Mumbai City FC had a two-point lead over ATK Mohun Bagan FC and with the Kolkata giants defeating NorthEast United 2-0 in the first match of the matchday, the onus was on Sergio Lobera’s team to grab the three points against Carles Cuadrat’s Bengaluru FC.

The Islanders started with a bang as they scored two quick goals in the first 15 minutes of the match ruling out a comeback from the goal starved Bengaluru FC. In the 9th minute, Mourtada Fall rose the highest to open the scoring on the night and inflict more misery on Bengaluru who were already on a losing streak. Five minutes later, Bipin Singh met an excellent cross from Mandar Rao Dessai and helped the ball hit the back of the net to double Mumbai’s lead.

After Sunil Chhetri netted a penalty that was controversially handed to the Blues, Bartholomew Ogbeche pulled a goal back to maintain the two-goal lead. Bengaluru and Indian national team No.1 Gurpreet Singh Sandhu spilled the ball after catching it and the ball bounced over the line and costed Cuadrat his job as he was sacked shortly after the match. 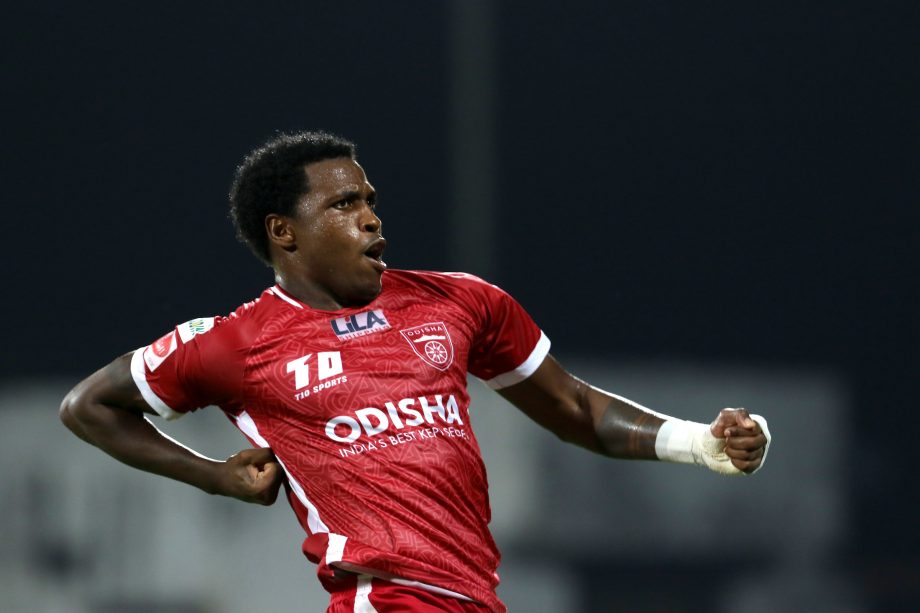 Odisha FC ended their winless run in the 2020-21 season of the Indian Super League as Stuart Baxter’s side became the last side to grab three points from a single match in the ongoing season.

Jordan Murray continued his excellent form with an early goal that gave the Blasters a slender lead in the 9th minute. Diego Mauricio equalised with a goal that was aided by a kind deflection from one of the Kerala defenders. Steven Taylor gave his side the lead just before half-time meeting a free-kick unmarked at the far post as he tapped the ball in the back of the net.

Just five minutes into the second half, Odisha doubled their lead as Mauricio rifled the ball in the back of the net from 10 yards giving Albino Gomes no chance of getting a hand to it. Before the hour mark, Mauricio had completed his hat-trick cutting in from the left and ensuring that he leaves the GMC Stadium with the match ball in his hand. 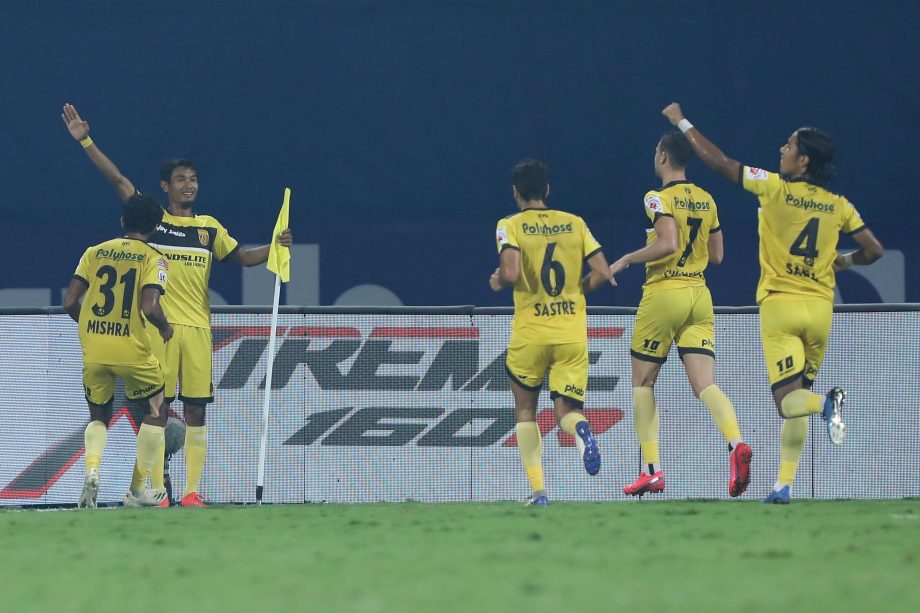 Hyderabad FC also enjoyed a good outing at the GMC Stadium in Bambolim as they struck 4 goals past a helpless Chennaiyin FC side. Very much like Odisha, Hyderabad was going through a tough run of matches as the Nizams had lost their last three matches against Mumbai City FC, Kerala Blasters FC, and FC Goa before bouncing back against the Marina Machans.

After missing three clear-cut chances in the first half, Joel Chianese opened the scoring in the 50th minute with a lucky outbreak that saw the Australian walk the ball in an empty net with Chennaiyin FC goalkeeper Vishal Kaith stranded in the middle of nowhere. Less than three minutes later, winger Halicharan Narzary rifled the ball off the underside of the crossbar and into the back of the net to double the Nizams’ lead.

An error from stand-in goalkeeper Laxmikant Kattimani allowed Anirudh Thapa to tap the ball in the back of the net from six yards gifting a goal back to Chennaiyin. Narzary then laid the ball for Joao Victor as the Spaniard hit a rocket past Kaith who was beaten for the third time on the night.

Few minutes later, Hyderabad hit Chennaiyin on counter-attack and Narzary scored his second of the night with relatively more ease as Manolo Marquez was happy to see his side’s losing streak end with a thumping 4-1 victory over one of the in-form sides.

MatchDay 10 witnessed 19 goals, the most number of goals in any matchday this season by a comfortable distance. But the most eye-catching goal, a moment of brilliance was witnessed in the match with the joint-lowest no. of goals scored as SC East Bengal’s latest recruit Bright Enobakhare gave his side the lead. 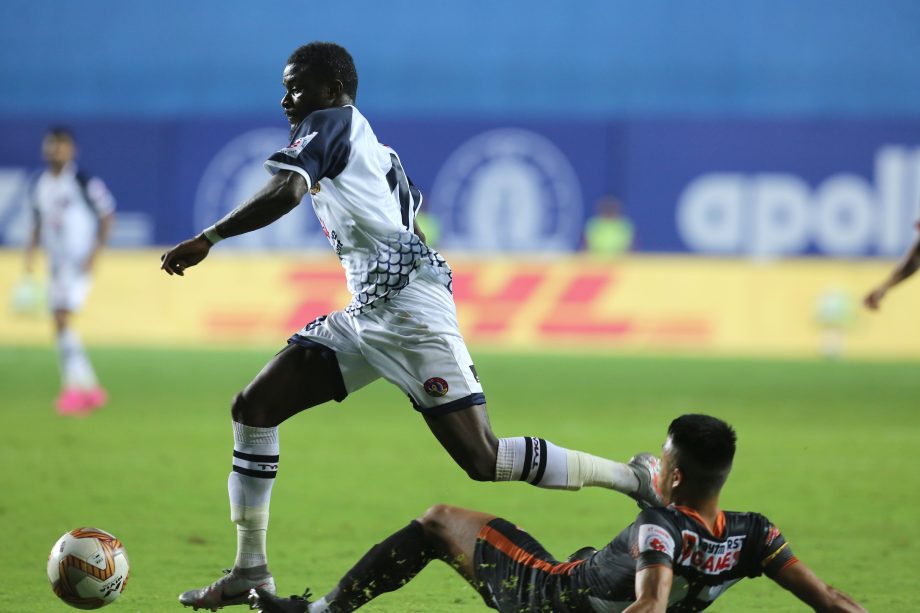 Bright Enobakhare skips past Saviour Gama before scoring a goal

The 22-year old Nigerian striker skipped past four defenders leaving Princeton Rebello, Aiban Dohling, and Saviour Gama on the ground in a heap before rounding off Mohammad Nawaz as the goalkeeper failed to stop the ball from hitting the back of the net.

10-men East Bengal had to defend their lead for just 10 minutes but failed to do so as young forward Devendra Murgaonkar scored his first goal for the Gaurs in only his second ever ISL appearance. The 22-year old Panaji-born forward was at the end of a Saviour Gama cross as he headed past Debjit Majumdar to win a solitary point for FC Goa. 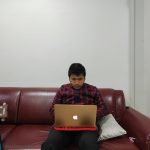