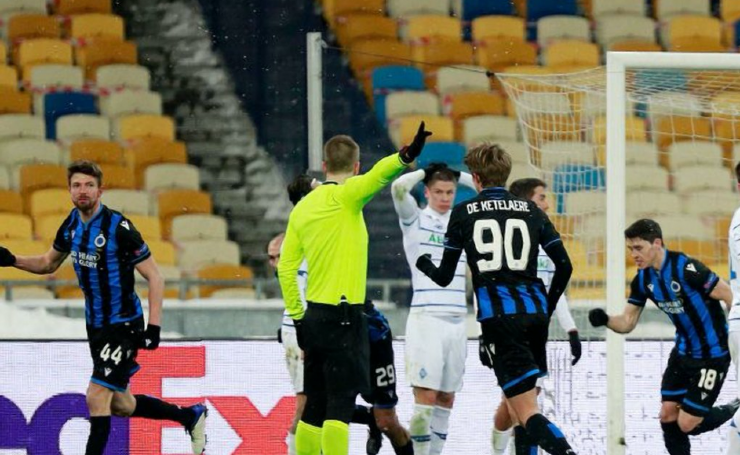 On Monday, reigning Belgium champions Club Brugge were considered favourites to beat Dynamo Kyiv in the first leg of their Europa League last 32 tie. The situation changed rapidly on Tuesday when three players and the coaching staff tested positive for COVID-19. Head coach Philippe Clement, his assistants, Brugge’s season top-scorer Noa Lang and key midfielder Hans Vanaken have all been placed in isolation.

However, it wasn’t all bad news for Brugge as the freezing weather in Ukrainian capital was far from what the Belgium side got used to. That was expected to work in Mirca Lucescu’s side favour as the weather was pretty much the same on Saturday, when Dynamo beat Olimpik in the league to increase their lead over Shakhtar in the title race.  The UEFA match delegate proposed to add two hours to the initial kick-off time and the game started at 20:30 IST instead of 23:25.

Considering all the circumstances, players didn’t dare to risk within the first minutes after the starting whistle at NFC Olimpyjs’kyj. The tempo increased after the 20th minute after Artem Besedin’s shot was blocked by Brugge defenders. Shortly after, Clinton Mata missed a chance to finish a classy counter-attack and put his team in front.. Near the end of the first half, Dynamo’s Tomasz Kędziora crossed to Vitaly Buyalskiy for two times, yet the Ukrainian headed over the bar on each.

In the second half, Buyalskiy managed to finish what he started earlier by scoring past Simon Mignolet from distance. Lucescu’s men continued the pressure after the scoring was open, but it was Brugge defender Brandon Mehele who levelled it xix minutes after Buyalski’s strike. Mehele headed the ball past Heorhiy Bushchan whose decisions in that exact episode were rather questionable.

Vanaken’s side could even snatch the victory, but the veteran striker Bas Dost blazed it in the 83rd minute. The visitors still appeared to be satisfied to make it 1-1 in such circumstances.