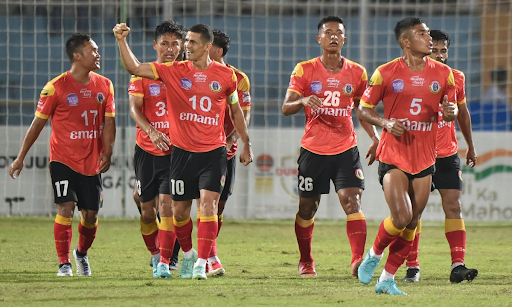 East Bengal defeated Mumbai City 4-3 in a thrilling encounter on Saturday in their last group stage match of the 2022 Durand Cup. Sumeet Passi and Cleiton Silva scored two goals each for the Torchbearers, whilst for the Islanders, Lallianzuala Chhangte netted a brace and the other goal was scored by Greg Stewart.

East Bengal’s head coach Stephen Constantine missed his defensive general Ivan Gonzalez in this match owing to a one-game suspension. Cyprus’ Charalambos Kyriacou was hence forced to play as a centre-back, while Alex Lima and Silva were the other two foreigners to make it to the starting XI.

On the other hand, despite having already qualified for the quarter-finals, Mumbai City’s coach Des Buckingham named a strong starting XI. Jorge Pereyra Diaz, Stewart, Alberto Noguera and Ahmed Jahouh were the four foreigners who were handed starts.

Having lost the Kolkata Derby only a few days back, the Kolkata-based team started this match with renewed vigour and could have taken the lead in the 4th minute itself, when Souvik Chakrabarty played a delightful pass for Pritam Singh. However, the latter’s shot was not on target.

The goal eventually came thirteen minutes later, courtesy of the player who scored the ill-fated own goal against ATK Mohun Bagan – Passi. Lima launched a cross from the left flank which found the 27-year-old unmarked inside the box, and he made no mistake in guiding his header past Mohammad Nawaz.

The second goal came only four minutes later, and this time, it was simply due to Silva’s brilliance, The Red and Golds got a freekick from a dangerous position, and the talismanic Brazilian’s shot had the accurate power and swerve to hit the top corner.

Three minutes later, Silva should have doubled his lead as this opportunity was much easier than the previous one. A swift counter-attack saw him completely unmarked with only Nawaz to beat, but he dragged his shot wide.

It might have served as a wake-up call for the Islanders, who finally responded in the 28th minute. Bipin Singh’s cross from the left flank found Stewart inside the box and the former Rangers midfielder did the rest by beautifully placing his shot past Kamaljit Singh. 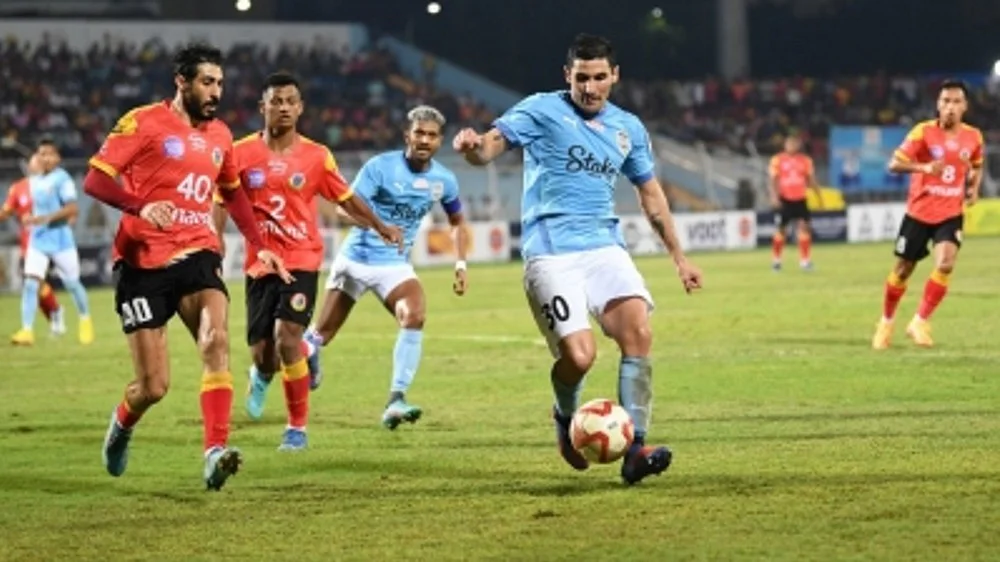 However, it took Constantine’s men only five minutes to restore their two-goal cushion. Passi’s half-shot-half-cross was aimed straight at Nawaz, but the young custodian made a terrible mistake and ended up pushing the ball towards his own net.

The sixth goal of the nerve-wracking game came only a couple of minutes later, with Mumbai City being the beneficiary this time around. Chhangte caught the entire East Bengal backline, alongside Kamaljit, by surprise with a powerful shot from distance.

Buckingham’s men eventually drew level in the 43rd minute, with Chhangte being the chief orchestrator this time around as well. Diaz’s initial effort was saved by Kamaljit, but the ball came back to Bipin who somehow managed to find Chhangte with the pass, and the latter repeated his brilliance to increase his goals tally.

After a frantic first 45 minutes, the second half had a comparatively sedate start. Substitute Eliandro tried his luck in the 52nd minute, but Nawaz was up to the task this time around. He had another go four minutes later, but this time around, the effort struck a player in blue.

Stewart had a good opportunity in the 72nd minute and managed to rattle the crossbar with this shot, but even if it was on target, it would not have stood as the linesman had his flag up for offside.

The winning goal came in the 81st minute when another East Bengal substitute, Amarjit Singh Kiyam darted down the left flank before playing a low cross into the box. Nawaz dived to clear the danger but could only deflect the ball onto Silva’s path, who had absolutely no problems in placing it into an empty net.

Following the pattern set in the first half, Buckingham’s men almost equalized yet again only three minutes later. They got a free-kick from outside the box and Stewart’s shot was on target, but Kamaljit’s acrobatic save helped East Bengal maintain their one-goal lead. The Torchbearers also had a chance from a freekick in the dying moments, but Silva’s effort sailed over the crossbar.

Though they were eliminated from the quarter-finals race before the match, East Bengal climbed to the third position in their group with this win, having accumulated 5 points from 4 games. On the other hand, having already secured 7 points, Mumbai City finished as the group-toppers despite the defeat.