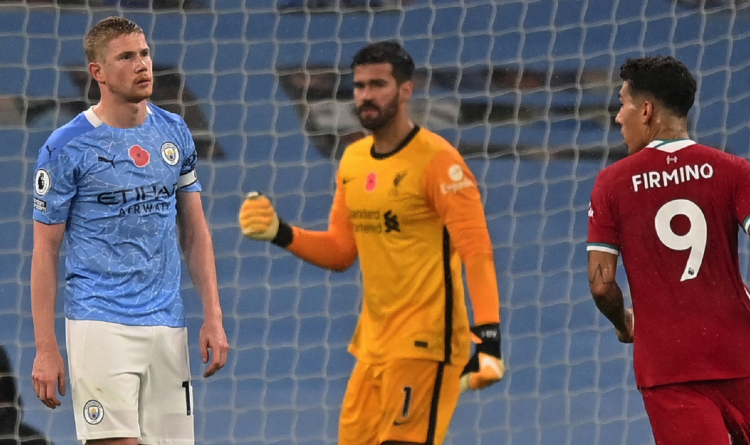 On Sunday, Liverpool missed their chance to return to the top of the Premier League as they drew at Etihad  before the international break. Brendan Rogers’ Leicester provided a 2016 flashback reaching the first place after the victory over Wolves.

The Reds made a bright start in an away game against Manchester City, with Mohamed Salah converting a penalty in the 13th minute. The Egypt international has scored the eighth goal in the first eight Premier League campaign matches. He is now the third player in the club’s history to reach that feat after Fernando Torres (2009-10 season) and Robbie Fowler (1995-96).

Gabriel Jesus got Guardiola’s side back into the game in the 31st minute, scoring in his second game in a row after recovery from a knee injury. With 19 passes during the attack and De Bruyne’s assist, City repeated their pass amount record set in 2017. Back then the goal was also made by De Bruyne and Gabi.

The Belgian could give City the lead. However, he blazed his penalty wide shortly before half-time. He became Premier League’s first player to miss the target completely from the penalty spot since October 2018, when Riyad Mahrez missed his penalty in the very same fixture at Anfield.

The ones who took their chance to take the lead in the title race were Leicester. Brendan Rogers’ side won over Wolverhampton thanks to Jamie Vardy’s early penalty goal. Later on, 33-year-old was denied on his second spot kick following Rui Patriciu’s save.

Leicester extended their winning run to six games across both Premier League and Europa League. Rogers was everything but satisfied in his post-match interview:

‘It’s a good feeling. Everything that the players have had to deal with over this opening period of the season, to win nine games out of 11 in all competitions, with everything that’s gone against us in terms of injuries, it’s been a huge effort’,

The Foxes secured themselves one-point lead over Tottenham and Liverpool before the international break. 2016 Premier League champions will face The Reds at Anfield on November 21st.