Bengaluru registers a 3-0 victory against Jamshedpur

Bengaluru was dominant in front of the hosts Jamshedpur

This was the third consecutive victory for Bengaluru in the Indian Super League as they defeated Jamshedpur 3-0 to progress towards the final playoff spot.

Simon Grayson opted for an unchanged starting XI as Bengaluru fielded the same 11 players that defeated Odisha 3-1 in the previous fixture whereas Jamshedpur a couple of changes to their starting XI as goal-scoring hero Harry Sawyer and Germanpreet Singh replaced Boris Singh Thangjam and former Blues defender Pratik Chaudhari.

The former champions Bengaluru were dominant throughout the game and did not give a single chance to the opposition to make a comeback. The Blues opened their account in the seventh minute with a lovely service from Prabir Das which was converted by Rohit Kumar. This was a proper indication that Bengaluru was all set to move higher in the points table.

This was not the end as Roy Krishna’s remarkable effort doubled the advantage in the 34th minute by scoring a stupendous goal, which was a shot from well outside the box to give Bengaluru a 2-0 lead.

Jamshedpur’s pass accuracy rate was better than that of Bengaluru but they could not convert them into a goal. They had several chances to come back in the game, however, lack of accuracy kept them on the back foot throughout and Bengaluru took the advantage from there onwards.

There was a time when the hosts won four corners in six minutes but they failed to deliver even one out of them. Though Jamshedpur got 21 corners throughout the game, there was not even a single moment where the team looked to put Bengaluru under pressure.

In all, they made 25 attempts on goal but managed to get only four of those on target. This proved to be one of the primary reasons for their defeat despite playing at the home ground. 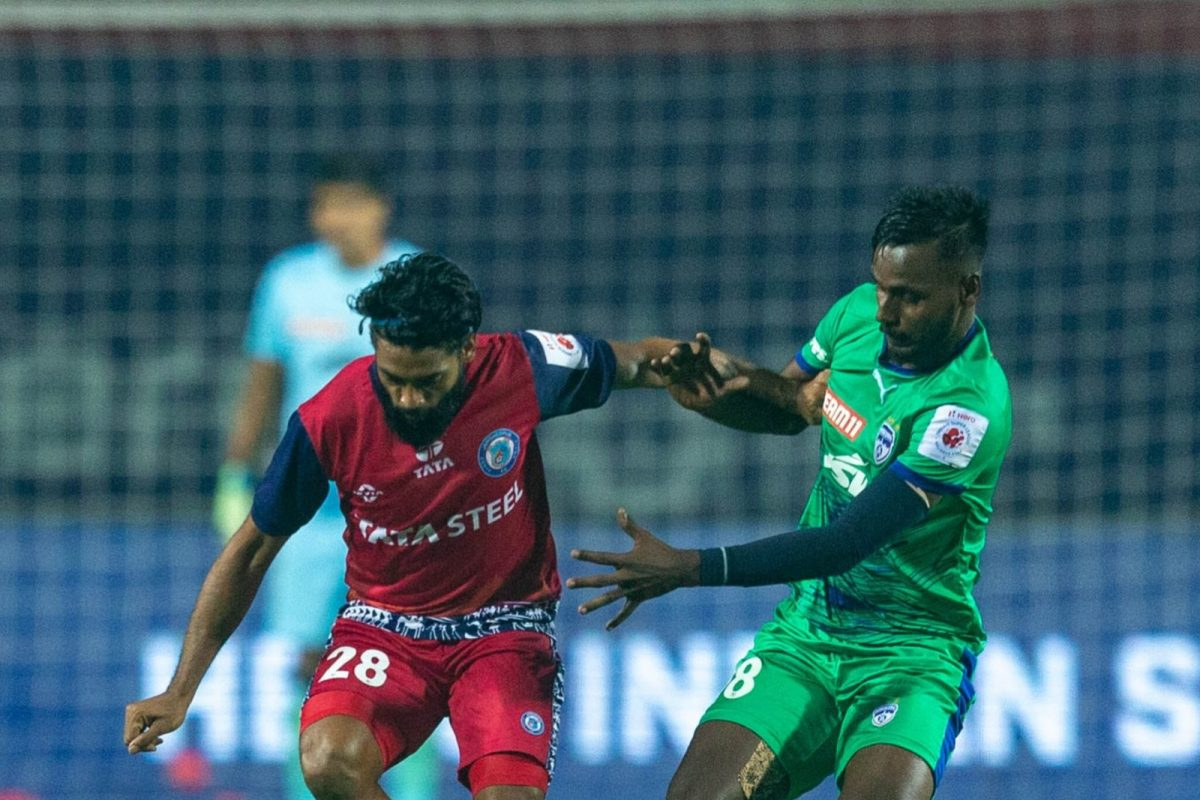 чJamshedpur players couldn’t convert their given chances into a goal

In the 62nd minute, Sivasakthi Narayanan took the assist from Javier Hernandez to score the third goal for Bengaluru. The goal was soon after the missed attempt from Ritwik Das as the Blues launched a counter-attack at that particular moment. Hernandez straightaway rushed forward and found Narayanan free to his right, which was converted into a fabulous goal.

Though all three goal-scorers were brilliant in the game, it was Sandesh Jhingan and Alan Costa who were constantly fighting in front of the aerial threats that were hurled at them by the Jamshedpur attackers. Their contribution was out of the box as they were clinical in putting Bengaluru up in the points table.

Also, a remarkable effort from Bengaluru’s goalkeeper Gurpreet Singh Sandhu made sure that the game should not go away from Bengaluru’s bucket. A couple of brilliant saves from him degraded the confidence of Jamshedpur attackers as Gurpreet preserved his clean sheet throughout the match.

The 2018 ISL champions would look to repeat the same feat this season with few more matches left to prove themselves. Bengaluru can increase their chances of reaching the next round if they win their next few matches, especially the next one against the Gaurs.

Jamshedpur, on the other hand, is in the second-last position with just two victories this season. There is a very lean chance that the Red Miners could qualify for the playoffs.

Bengaluru has now moved to the seventh spot in the points table with just one point away from Goa, who are positioned sixth. Bengaluru will face off against Chennaiyin next Saturday whereas Jamshedpur’s next battle is scheduled for next Friday against the table-toppers Mumbai City.