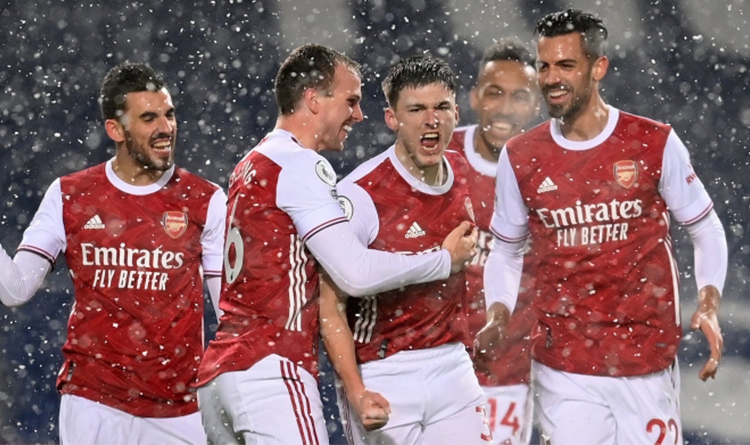 Arsenal defeated West Bromwich Albion in miraculous snowfall aesthetics, picking up their third win in a row. Arteta’s team is slowly coming out of the crisis ending the match with a score of 0-4.

Before the start of the match, the field was covered with a decent layer of snow and had to be cleared. After the snow had been removed, the main referee Martin Atkinson decided that the match would take place anyway.

By the first minutes, the field eventually looked perfect, and the snowfall stopped. Not for long..

Halfway through the first half, it started snowing again. Before that, Arsenal had already managed to take a two-goal lead.

Kieran Tierney, nominal left-back made, a magical penetrating run, finishing it with a brilliant far-post shot. The beautiful impact inspired the whole team and brought applause even to the most unsophisticated spectators.

Also, the young man from Scotland has created 15 chances in the Premier League since the start of December, more than any other defender in the league in that timeframe.

Impressive performance with a 1 assist and 1 goal for that night. He became a Man of the Match by the fan voting on the official Arsenal website.

The second goal was scored by the academy player, England’s Bukayo Saka. He was a fire that night and brought a lot of problems to the opponent.

Another hero of the match: Alexandre Lacazette. He was successful in extending his goal-scoring streak with a double. Now he has seven Premier League goals this season, at least four more than any other Arsenal player this term.

Also worth mentioning is the performance of the young player Emile Smith Rowe.

For the third match he showed a great play, this earned him a place in the starting lineup.

“He is a player with very specific qualities and is able to open up in the free zones, playing in the position of attacking midfielder.  I’m happy to work with him, we talked and I followed him during his loan. I think he can achieve impressive results,”

High decision-making speed, the intensity in attack construction, the ability to find open space, excellent passing. This all can make Smith Rowe a true Arteta savior.

It is clear that Saka and Tierney are in fiery form, but they are players with a certain profile and area of action. And Smith Rowe, in Arsenal’s last three games, has been the one who links the midfield and attacking lines – the balance that Arteta has lacked throughout the season.

The Londoners are still low in the table (11th place). They are now only six points away from the top five (Everton is 5th).

Also, the team have a nice calendar in January: Crystal Palace, Newcastle and Southampton.

What concerns Allardyce’s team, he has a lot of problems to solve. The unstable and sluggish play puts the team at risk of relegation to the Championship. The coach, who is known for his ability to save teams from relegation, came quite recently after the shocking dismissal of Bilic (especially considering the draw with Manchester City).

“We have to defend better. It’s as simple as that.”

“If it means we have to wait until the right opportunity to attack, like we did at Liverpool, then that’s the way we are going to have to do it. We have already proved that when we open up and try and play, like we did against Villa, Leeds and now Arsenal tonight, we don’t seem to cope very well. That’s why we’re seeing the type of goals going in against us.”