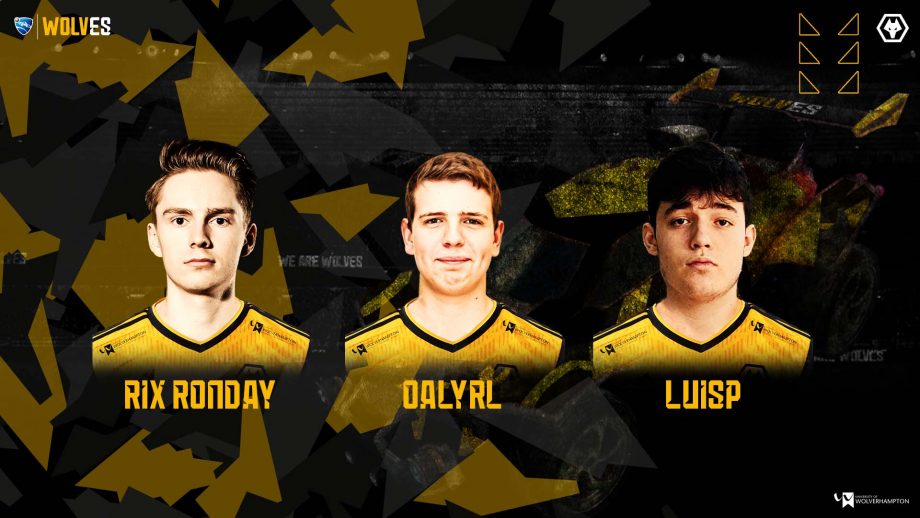 English footballing side Wolverhampton Wanderers have announced their roster with an aim to participate in the Rocket League for the first time, at the RLCS X Winter Split which is scheduled to commence later this year.

Wolves Esports has signed talented ex-Barrage outcast Ole “Oaly” van Doorn, who will join alongside RLRS and Libertas starlet Rix “Rix_Ronday” Ronday, and Spanish wonderkid Luis “LuiisP” Puente Peña. Rix will wear the captain’s armband. Wolves will be hoping this talented, yet young squad will reward their faith with a good performance in the side’s maiden Rocket League appearance.

Wolverhampton Wanderers, who operate in the English top flight, will see their respective  rosters also compete for titles such as FIFA 21, PlayerUnkown’s Battlegrounds (PUBG), and Identity V.

Rix Ronday rolls in from Libertas who managed to seal a top-16 finish in Europe in the last two regional competitions and in the Fall Major. He is a double time Gfinity United Kingdom Series champion as well. He expressed:

“It is a real honour to captain the first-ever Wolves Esports Rocket League team. I’m confident that we have recruited two of Rocket League’s most exciting talents in Ole and Luis and we are working hard behind the scenes to prepare for the RLCS X Winter Split kick-off.”

In the announcement, Russell Jones, the General Manager for Marketing and Commercial Growth of Wolves Esports, also expressed his sheer delight, saying:

“We are thrilled to announce the launch of a Wolves esports Rocket League team. Millions of people around the world are playing Rocket League and, given its similarities to football, it felt like the perfect next step into esports.”

The side will begin their journey for glory in the European Winter Split, set to start from the bottom with no RLCS points at their disposal. Kicking off on November 12, Wolves Esports will hope to fit the bill for the first Regional Event and start to scale the table for a spot at the Major in January, 2021.