Flashpoint Season 2: Which Teams Are Destined for Success? Which Ones Are Going Down? Exclusive Prediction from PariMatch News

B Site Inc. and FACEIt are teaming up once again to bring you one of the most anticipated CS:GO tournaments of the year – Flashpoint Season 2. The fully online competition will start as early as Tuesday, November 10. The excitement for the players and the fans are at the peak, as the groups and the schedule have already been announced by the organizers. 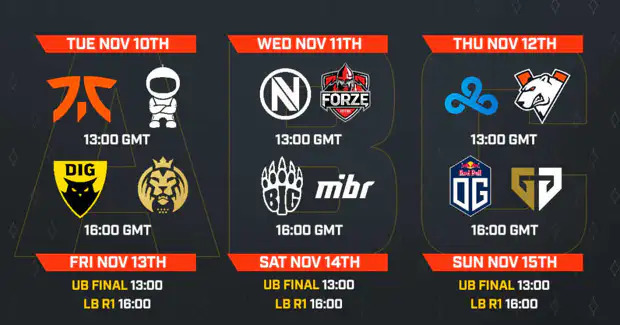 With the list of participating teams, the groups and the tournament structure already at the disposal, it’s time for an exclusive prediction from PariMatch News, so that you can have a complete idea as to what to actually expect from the tournament, and what not to.

So what are we waiting for? Let’s dig in.

On to the Playoffs.….

As per the competition setup, the top two teams from each group will automatically advance into the subsequent playoffs. The teams finishing 7th-10th will also have a second chance. They will fight it out for the final two playoff spots, in the Last Chance matches. But which teams are equipped enough to advance into the playoffs? Let’s take a look at what the stats say.

Teams to Watch: This group looks pretty much straight-forward, as the contrast between the teams are fully visible. MAD Lions are the defending champions of the competition, as they shocked everyone by winning the season 1 of Flashpoint in April. Since then, they haven’t looked back at all, as they went on to finish 4th in the BLAST Premier: Spring 2020 European Showdown, and have shown promising performances in the Eden Arena: Malta Vibes – Week 9 and the Nine to Five #5 tournaments, as they came second in both of them. With the valued additions of Ismail “refrezh” Ali and Rasmus “HooXi” Nielsen (the new captain as well), their already strong roster looks good enough for them to pose a formidable challenge to defend their title.

But the favourites to top the group is Fnatic. Often stylized as fnatic and abbreviated as FNC, the immensely successful team has had a pretty good time throughout 2020, having recently won against the likes of OG and North (Canada) in Dreamhack, and keeping in mind their exceptional track record, they certainly are heavyweights in this tournament. Not to mention, their exceptional feat of having the longest “Legend status” streak, of 12 consecutive major titles. Their Swedish roster has exciting names to offer as well, such as Maikil “Golden” Selim, and Freddy “KRIMZ” Johansson etc.

Teams to Watch: Group B offers a bit of a challenge. The group is well-balanced and very much up for grabs. Although Team Envy’s poor showing lately surely ensures that they will only be a makeweight for the group, with all the other teams using them as a podium to launch. The group favourites has to be BIG. Because, come on! They are big. So have been their achievements. They have won all sorts of competitions in 2020, namely – DreamHack Masters Spring 2020 – Europe, ESL Pro League Season One Europe Qualifiers, CS Summitt 6 Europe, DreamHack Open Summer 2020 – Europe etc. They have had a little dip in form before the start of the Flashpoint Season 2, finishing 5th and 4-6th in DreamHack Open Fall 2020 and BLAST Premier Fall Series 200, respectively. Their whole lineup has been in top form as well. The tournament will most likely be a good cause for them to come back in form.

It’s a complicated choice between MIBR and forZe for the second automatic playoff spot from the group. MIBR (also known as Made In Brazil) have been performing very consistently in the recent past, with all their awesome Brazilian fans right behind them. Vito “kNgV-” Giuseppe has been top draw with the rest of the squad giving him great support. On the other hand, although forZe has had a voluptuous past with tremendous amount of success, their recent form has dropped significantly. But, they too have a very talented roster, and under the able hands of Sergey “lmbt” Bezhanov, a third placed finish in the group doesn’t look like a far cry.

Teams to Watch: The group of death ensues. This is a group where all four of the teams will be confident enough to advance into the playoffs. The draw couldn’t have been more exciting, as this group will produce epic matchups like Virtus.pro Vs OG, and Virtus.pro Vs Cloud9. Gen.G as a team has shown much improvement throughout last year or so. But their young roster will probably find it too hard to pierce through the other heaveights of the group. With OG, there is always a sense of unpredictability. They are the highest ranked team in the competition, but their inconsistent performances throughout 2020 have decreased their credentials somewhat. Cloud9, on the other hand, has been completely the opposite. Since the altering of the formats across every tournament, from offline to online, because of the Covid-19 pandemic, Cloud9 (or C9, as they say) has been phenomenal. Exciting to watch, full of tactics and gameplan, the roster has the potential to go all the way in the competition.

It’s not a surprise that Virtus.pro are being selected as the favourites to win the group. One of the most prominent eSports teams Europe has to offer, Virtus,pro has taken the whole CS:GO scene by storm, with their interesting and calculated gameplay, along with their incredible commitment and consistency. They have won many prestigious tournaments all year. Among them, Parimatch League Season 3, ESL One Los Angeles 2020 – Online: Europe & CIS, and Parimatch League Season 2 Round Robin have been the most notable. They also only came second in the Epic Prime League Season 1. All things considered, the Russian side seems to have the cutting edge that could pretty much see them topple everyone else in the tournament.

Having finished 10th in the Flashpoint Season 1, Dignitas is a team which has walked backwards since then. They were a surprise inclusion in the tournament draw. A team without any stability or consistency at all, we qualify Dignitas for the last spot (12th) of the tournament.

From the worst, we go onto the probable surprise packages of the tournament – MIBR (Made In Brazil). The Brazil-based roster are not yet considered a viable candidate for the title by many, but they have all the means to prove their doubters wrong. Their recent form as a team and the stability in their roster are the most valuable confidence boosters they could ever ask for, and they have got them. One way or the other, MIBR are destined for a top drawer finish in the Flashpoint Season 2.

With all the backing of the information, stats, and all the bookies on their side, Virtus.pro are the tournament favourites. They have all it takes to take the half-a-million US dollars champions’ prize money home. Though their players have their fair share of doubters too, their undeniable consistency and untouchable teamwork should see them through as the champions.

With the whole tournament being played online, all the matches will be streamed on the official Twitch channel of Flashpoint. That will be the only way for the fans of CS:GO to watch the matches, as there will be no in-person attendance. With the recent online CS:GO  competition BLAST Premier Series recording out-of-the-world numbers of peak viewers, the Flashpoint Season 2 fever is also expected to be spread amongst CS:GO fans, all over the world.

One thing that needs no prediction, is that – Counter Strike: Global Offensive Flashpoint Season 2 is going to be a treat for the eyes. Close your eyes, and it will be onto you in a flash.