West Indies will welcome New Zealand for the final T20I of the three-match cricket series at Sabina Park, Kingston, on Monday after the visitors took a 2-0 lead following their second successive victory over the hosts on Saturday.

The visitors put on a clinical performance in the second T20I and are heading into the third match, eyeing a hat-trick of victories. The Kiwi bowlers set up the victory for the hosts in the second T20I as the spin duo of Mitchell Santner and Michael Bracewell utilised the slow pitch to full effect, dismantling the Windies batters to a meagre 125 runs in their 20 overs while batting first.

Earlier, the Kiwis courtesy of a 41-ball 76 by Glenn Philips coupled with Devon Conway and Daryl Mitchell’s forties posted a mammoth total of 215 for the loss of five wickets in their allotted 20 overs. The 71-run partnership between Conway and Philips for the third wicket laid down the momentum for the Kiwis to set up an unassailable 2-0 lead in the three-match series.

The West Indies and New Zealand T20I series began on Wednesday in Kingston, with the Kiwis winning both the T20Is to take an unassailable 2-0 lead. That was West Indies’ fifth loss in a row and their eleventh loss of the season. The visitors, on the other hand, are unbeaten in T20Is this year, having won all nine matches.

In the first T20I, West Indies won the toss and elected to field first. The Black Caps posted a total of 185 for the loss of five wickets in 20 overs. Devon Conway scored 43 runs off 29 balls, skipper Kane Williamson top-scored with 47 runs off 33 balls, and James Neesham finished off with an unbeaten 33 off 15 balls.

West Indies, in reply, only gathered 172 runs for the loss of seven wickets in 20 overs. Shamarh Brooks scored 42, and Romario Shepherd scored an unbeaten 31. Mitchell Santner was named the Player of the Match for his performance with the ball, taking three wickets and conceding 19 runs in four overs. 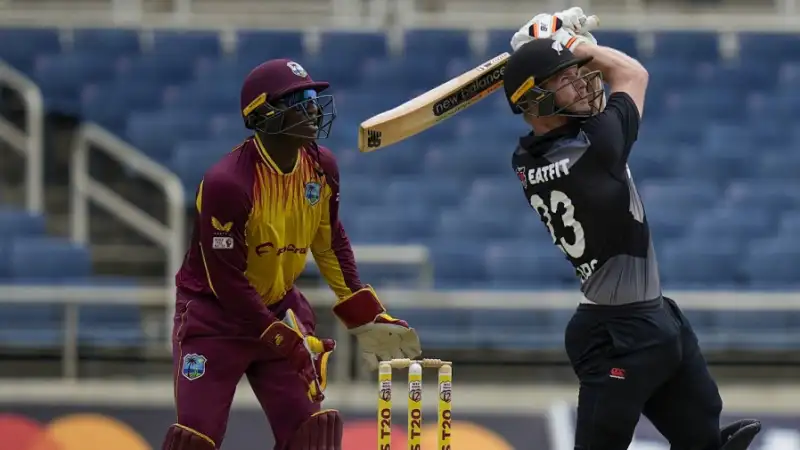 In the second T20I, New Zealand won the toss and opted to bat first. After a good start, the Kiwis struggled for a while when Martin Guptill and Kane Williamson departed in quick succession. Devon Conway and Glenn Phillips steadied the Kiwi ship before switching the gears to take it on the opposition. A fiery Phillips scored 76 off just 41 deliveries.

Phillips got a steady company from Daryl Mitchell who went on to score a quick firing 48 from just 20 deliveries. Jimmy Neesham and Bracewell ended the proceedings as New Zealand mounted up a humongous 215 run on the board.

West Indies struggled from the very beginning in their run-chase. The hosts lost their opening wickets in the early overs. This prompted the West Indies to experience yet another batting collapse. Rovman Powell and Romario Shepherd managed to build a steady partnership for a while before it was ultimately broken. After the end of the stipulated 20 overs, West Indies managed to bring up just 125 runs on the board. 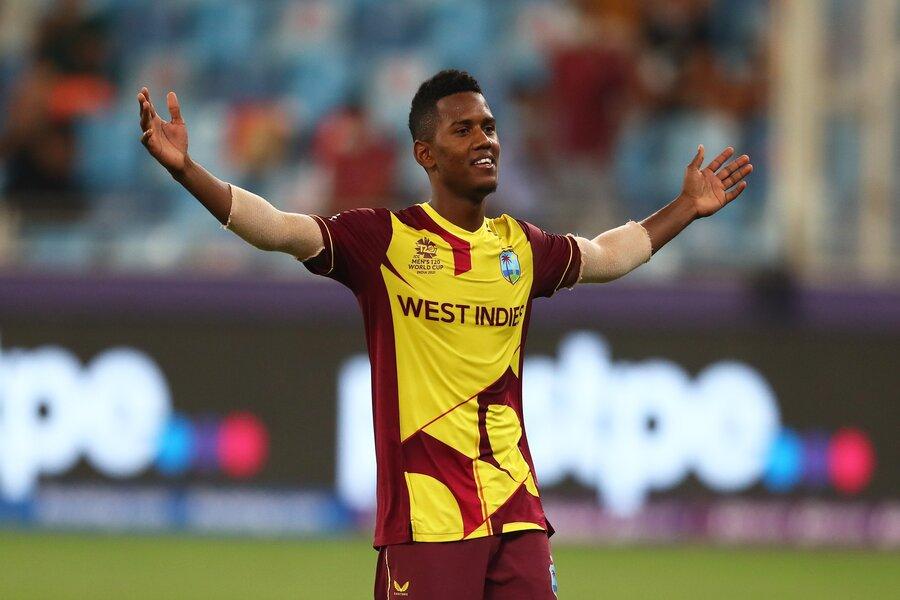 Akeal Hosein is yet to play a match in this series

Akeal Hosein (West Indies): West Indies spinner Akeal Hosein was the most impressive bowler for the Men in Maroon during the India T20I series. He gave away runs at an economy of 6.15 runs and scalped three wickets in the series. The left-arm spinner will want to emulate his performance during the upcoming as well if given a chance.

Kane Williamson (New Zealand): One of the most technically-sound batters of this era and one of the best batters in the T20Is, Williamson is expected to deliver for his team yet again. The first T20I against West Indies was his first game in the format in 2022. He had a below-par IPL, but his innings with four fours and two sixes in the first T20I showed that he very well has the rhythm and what is required to deal with the tricky Sabina Park surface.

You’d suspect that the last thing West Indies want right now is to contest this match, which is essentially a dead rubber due to the Kiwis already having an unassailable series lead. With the T20 World Cup beginning later in the year, the hosts likely have one eye already focused on that, which may not bode well for their prospect here in Kingston.

For New Zealand, the opposite is true. Their players are in excellent form, they are clicking well as a unit and have established themselves as a very tough prospect at home. Back them to seal a series sweep.