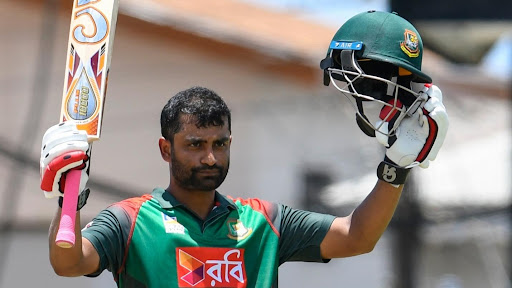 Bangladesh ODI skipper Tamim Iqbal said that they are eyeing to end the West Indies on a high in the upcoming three-match ODI series which will start on July 10 at Guyana.

Bangladesh was clean swept in the two-match Test series and three T20Is and they need an extraordinary effort to turn the tables in the ODIs considering the ongoing form of the opposition.

Bangladesh ODI skipper Tamim Iqbal said that they are eyeing to end the West Indies on a high in the upcoming three-match ODI series which will start on July 10 at Guyana.

“We all know losing is not fun and we want to finish this series on a high for sure and everybody is looking forward to it,”

“Look, when you are not winning matches during a series it is always difficult but we have to remember this is one format we are very proud of and we are a very good team and there is no doubt about it. But no matter how well we play on the day we have to tick all the boxes and that is the most important thing. So far we could not play good cricket in Tests and T20Is, but I hope we will start well on the 10th, and let’s see because this is one format I feel we are comfortable with.

Saying that the other team is also playing really well and we have to make sure that we bring our A-game.

“We definitely tried our best (in Tests and T20Is) but it is also true that we could not play our best cricket. My message will be that in the ODIs we have to try our best and no matter what I say we have to bring our A game to the field and that is the most important thing. I don’t think I have to go and inspire everyone individually because they all are playing for the country and nothing I can be more motivating than this saying that if I have to talk individually (to motivate someone) I will definitely do,”

Tamim expressed his disappointment that their practice match was ruined due to rain and he told his teammates to prepare themselves mentally considering they hardly had enough time in the nets.

Tamim was not part of the T20I squad and he failed to have a proper batting session recently as he did not travel with his teammates when they played in Dominica, coming down to Guyana straight from St Lucia.

“It’s been seven to eight days and still I could not bat. Today there was a chance and I came but it ended after two balls (due to rain). Look we cannot predict rain and practice sessions were scheduled but unfortunately, due to weather it did not happen (practice) and we just have to be ready mentally,”

Tamim added that while Shakib al Hasan will be unavailable for the series, they don’t have a proper all-rounder which will be an issue. Shakib decided to skip the ODI series against West Indies as the series is not part of the ICC Super League.

“Normally there are not too many proper all-rounders in Bangladesh and so I have to answer this question time and again (whether I will be missing Shakib) and you have to ask the same question. If we had two three all-rounders who were 50-50 or 60-40 (compared to Shakib) then these questions wouldn’t have been raised so much,”

Bangladesh is scheduled to play three ODIs in Guyana on July 10, 13, and 16 respectively.