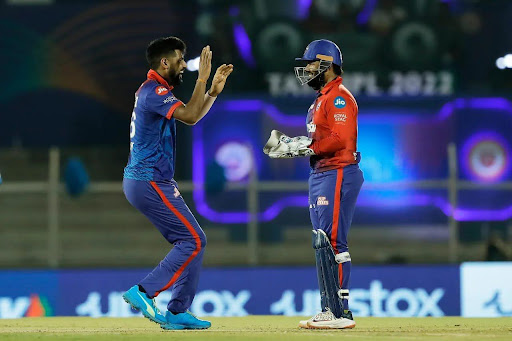 DC is at the sixth spot in the points table

Delhi Capitals two players have suffered a Covid-19 test positive ahead of the game PBKS while Delhi Capitals after being affected by Covid-19, put in a dominating performance against Punjab Kings and register a nine-wicket win.

Delhi Capitals’ two players Mitchell Marsh and Tim Seifert have suffered a Covid-19 test positive ahead of the game against Punjab Kings in the ongoing Indian Premier League.

Despite being affected by Covid-19, Delhi Capitals put in a dominating performance against Punjab Kings and they went on to register a nine-wicket win to seal the sixth position in the points table.

Axar Patel, David Warner, Kuldeep Yadav, and Prithvi Shaw played a vital role in the win against PBKS. After suffering from the Covid-19 crisis, all-rounder Lalit Yadav said that the win is really important for the side.

“This win is really important from a momentum point of view. We were looking for momentum since the start, we’ve played good cricket so far but we were not consistent. In this game, we were consistent in all three departments, and that’s what we were looking for. This was a much-needed win, it will lift the team’s confidence going ahead. And, it has created a good atmosphere in the camp,”

Lalit said in an official release issued by Delhi Capitals.

The all-rounder, who marked an impressive bowling figure of 2/11 in two overs, spoke about how the team dealt with uncertainties in the buildup to the game.

“We just discussed to enjoy the game and giving our 100%. We were just focusing on the match. We also had one training session the other day, so it’s not that we didn’t have any practice at all. It’s just that we didn’t know whether the match will happen or not, but overall, we were confident about our abilities,”

Speaking about the team’s atmosphere after the win, Yadav said,

“It was a different vibe altogether. You know, when we win, everything seems to look positive, no matter how many mistakes we commit. That’s a great thing for the team, especially when the next match is in two days. The momentum we’ve gained is really important, and we will go into the next game with confidence.”

Speaking about Delhi Capitals’ next match against Rajasthan Royals, the all-rounder said,

“They have been one of the most consistent teams in the tournament so far, and have been playing quality cricket. However, we will focus on ourselves, we will go with our plans and try to execute them.”

Delhi Capitals will play their next game against Rajasthan Royals at the Wankhede Stadium on Friday.