We have to give the batters the confidence to fear nothing – Sri Lankan head coach, Silverwood  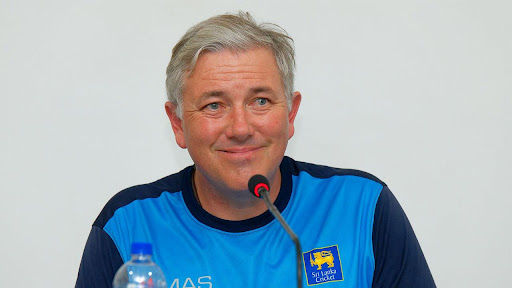 “We have to give the batters the confidence to go out there and not fear getting out.”

Newly-appointed Sri Lankan head coach Chris Silverwood has set his aims clear on the batting of the team as he wants them to score in a free and brave manner.

In the first press conference after taking the role of Sri Lankan head coach, Chris Silverwood has set his aims clear on the batting of the team as he wants them to score in a free and brave manner.

“I have spent the last couple of weeks just digging through stats, looking at how we can improve. One of them is the intent to score. We have to give the batters the confidence to go out there and not fear getting out,”

“It’s all about scoring runs and that’s what we want the batting line-up to do. I’ll try and instill some confidence into the boys so they can go out there and construct their innings and score big runs, certainly in the first innings, and give us something to bowl at. It’s not rocket science.

To the bowlers, he asked the pacers to focus on the first 12 balls they bowl as the first two over’s have a major impact on the bowlers.

“I’ve specifically challenged the Test bowlers to be hot on their first 12 balls… because as we all know, (with) the first 12 balls you can make a real impact as well as put pressure back on the batters.

“It’s about instilling the discipline that we can do good things for long periods and not getting bored of doing them. Hitting your lines and lengths, finding spots on any given pitch, and being able to live there, and then you bring in the skills like wobble seam, etc. And all our guys swing it too, which is great, so it’s just about bringing all those skills together and being disciplined enough to live in one area, where you can wear the opposition down if need be. It’ll be a gradual process, but if you sow the seed and let it grow, over a period of time you will find that people can do it.”

Sri Lanka is set to travel to Bangladesh this May for the two-match Test series and the 18-man squad featuring a couple of youngsters that represent the future of the Sri Lankan cricket team.