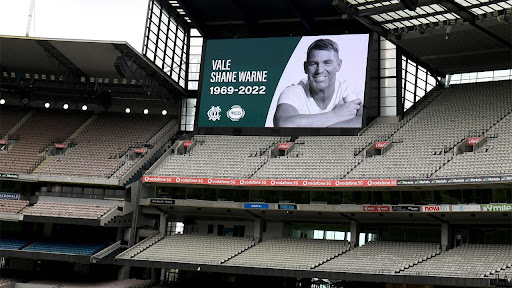 Shane Warne’s three children paid a tribute to their father, who has died at the age of 52, due to a suspected heart attack while saying nothing is going to fill the void he has left in their hearts.

Shane Warne’s three children paid a tribute to their father, saying nothing is going to fill the void he has left in their hearts. The legend passed away in Koh Samui, Thailand, of a suspected heart attack. Warne’s 22-year old son Jackson commit to “try and be happy” despite losing his “best friend”, while his daughter Summer said she wished she had hugged him “tighter”.

“To my brother, my best friend, to my Dad, I love you so much. I don’t think anything is ever going to fill the void you have left in my heart,”

“Sitting at the poker table, walking around the golf course, watching the Saint, and eating pizzas are never going to be the same. But I know all you ever wanted for me is to be happy, no matter what. So, that’s what I’m going to do, try and be happy.

“I am going to miss you so much Dad and you were truly the best father and mate anyone could’ve asked for. I love you so much Dad, see you soon.” Warne’s eldest daughter Brooke said her father was taken away too soon and “life is so cruel”.

“I will forever cherish our final memories together laughing and joking around with each other. We were happy. We were so similar in so many ways and I always used to joke that I got your genes and about how much that annoyed me!!”

“Well, now I couldn’t be happier and prouder than I have your genes. I am lucky and will forever be so proud to call you my Dad forever. I love you to infinity and back and I will miss you forever.”

Warne’s youngest daughter Summer said she felt “robbed” of her time with her father and longed for another one of his hugs.

“Dad, I miss you so much already. I wish I could’ve hugged you tighter in what I didn’t know were my final moments with you. And your final breaths were only moments away,”

“Our time was robbed. I want more holidays with you, more laughs where your smile lights up the whole room, more ‘goodnight I love you SJ, I’ll see you in the morning’, more talks about how our days were and just to feel safe when you would hug me and you would let me know how proud you are of me and how much you love me.

“You haven’t died Dad, you’ve just moved to a different place, and that is in our hearts. I wish I could’ve told you that everything was going to be okay and held your hand. You are the best Dad someone could ever ask for.”

Warne’s parents Keith and Brigitte said finding words to express their sadness is an “impossible task”.

They described the night of March 4 as the beginning of a “never-ending nightmare” for their family and said their son’s death was a tragedy they would never come to terms with.

“To find words to adequately express our sadness is an impossible task for us and looking to a future without Shane is inconceivable, hopefully, the mountain of happy memories we all have will help us cope with our ongoing grief,”

they said in a statement.

“world has lost someone extremely special to them”, while he had lost “my nemesis in all sports as a child, the person who smeared Vegemite under my nose while he pinned me down giving me the typewriter, my big brother, my mate”.

Warne’s ex-wife Simone Callahan, who was married to the legendary cricketer for a decade, wrote:

“Who brings a light so great to the world that even after they have gone the light remains.”