Ugly batting performance of Sri Lanka as England bowlers dominate on day 4 of the second Test, ENG won by 6 wickets 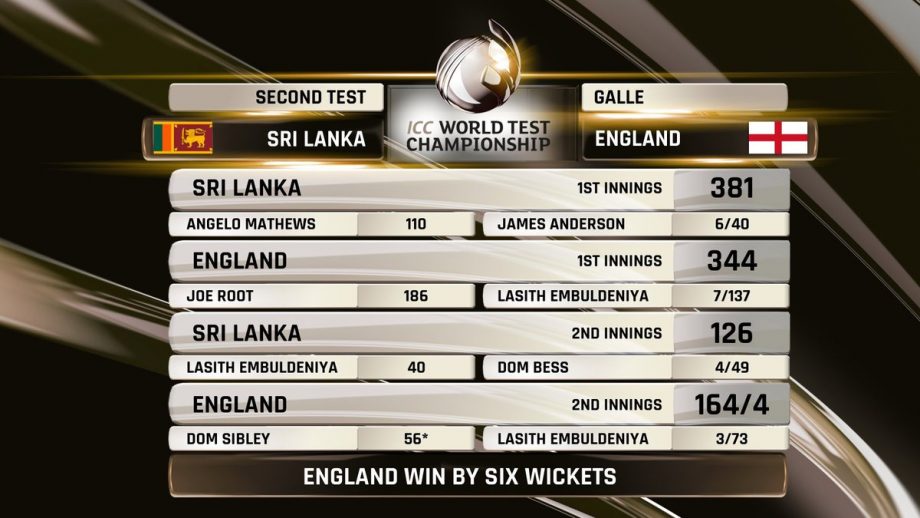 England beat Sri Lanka on day 4 of the second Test at Galle by 6 wickets. Sri Lankan batting collapsed in front of England spinners on 126 in the second innings, England chased the target by 6 wickets to sweep the series by 2-0.

Dom Sibley and Jos Buttler scored the winning runs after England’s top 4 batsmen struggled to play the spin, Sri Lanka lost the game by 6 wickets on day 4 of the second Test on Monday at Galle.

Sibley and Buttler put on an unbeaten 75 runs stand to get England across the line who were struggling on 89-4, got the target of 164 which they chased by 6 wickets to sweep Sri Lanka by 2-0.

The result gave England a successive second Test series sweep in Sri Lanka against Sri Lanka before winning all the three Test matches in the island nation in 2018.

“Really proud of how calm we were,”

skipper Joe Root said after being named man of the man and series for knocks of 228 and 186 in the first and second Test respectively.

“Credit to the bowlers for putting Sri Lanka under pressure. We are on an upward curve as a team and looking to get better,”

England was given an easy run chase after Jack Leach and Dom Bess destroyed Sri Lankan batting order, none of them could stand still and they managed only 126 runs with the loss of 10 wickets.

“What we have got is a huge amount of confidence coming out of these two games. We’ve had to manage different situations and all of that will stand us in really good stead,”

“Now we’ve got four very important games against arguably the best team in the world in their own conditions. We’ll have to play right at the top of our game to win out there. But we couldn’t be in a better place to go and challenge them.”

Lasith Embuldeniya, the left-arm spinner of Sri Lanka claimed three wickets that gave Sri Lanka hope for some time and he reached his best Test-match figures of 10-200.

The debutant spinner, Ramesh Mendis took the crucial wicket of Joe Root who scored a second consecutive century in the 1st innings of the second Test to reach the score of 344, given in reply to Sri Lanka.

Embuldeniya took the wicket of Zak Crawley on 13 and he also got rid of quickfire innings of Jonny Bairstow (29), putting a twist in the game but Sibley decently reached his third Test half-century.

Leach and Bess took 4 wickets each to set up an easy win for England. The hosts started the second innings with a lead of 37 but it all came to dust in the afternoon session as their batting terribly collapsed.

Embuldeniya scored the highest 40 runs before picking up 7 wickets in the first inning of England.

“He was outstanding throughout the series, doing all the hard work,”

“He always comes and asks how to improve, so I’m sure he’ll be a good asset going forward.”

England is now heading to India for their four-match Test series, starting from February 5th in Chennai. The first two Tests are to be played in an empty stadium. Joe Root admitted that they have a tough series coming ahead with a few times of preparation.

“It’s going to be strange. We’ve got to be quite realistic: we are going to have seven or eight days with no cricket now with six days in quarantine. Then we will have three very important days of preparation ahead of the series.”