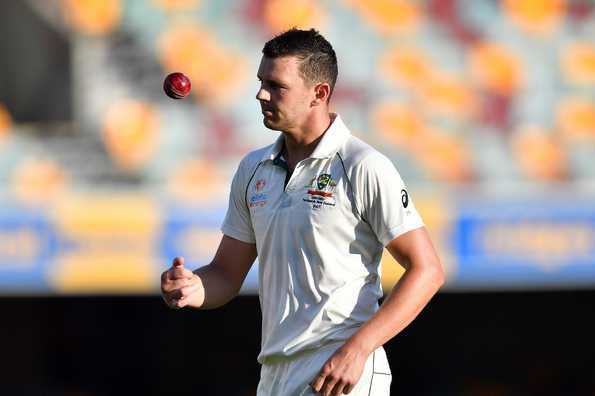 Australia’s right-arm fast bowler Josh Hazlewood has risen into the top five in the ICC Rankings for Bowlers in Test cricket following his stunning spell in the second innings of the opening Test between India and Australia at the Adelaide Oval, wherein he claimed 5-3-8-5 to help the hosts record an 8-wicket win.

Hazlewood in company of Pat Cummins sparked a spectacular collapse in the Indian batting ranks, as the visiting side was bowled out for their lowest-ever total of 36, which helped them set a small target of 90 runs to win for the Australian team. Joe Burns and Matthew Wade did the rest as Australia sauntered to a 1–0 lead in the four-match Test series for the Border-Gavaskar Trophy 2020-21.

The superb bowling performance from the Australian pacer Hazlewood had him breaking into the top five of the ICC rankings for bowlers for the first time since March 2018. He was at the ninth position before the start of the Test match and he rose four positions to finish at No 5 while reaching 805 points.

Cummins, who was also the wrecker-i-chief of the Indian cricket team with four wickets in the second innings and three in the first, remain at the top of the table with 910 points. He gained as many as 6 ratings points in the first Test at Adelaide which helped him extend his lead to 65 points from the second-placed England fast bowler Stuart Broad, who has 845 ratings points.

For India, spinner Ravichandran Ashwin became the top-ranked bowler for his country with four wickets in the first innings as he went past the lead fast bowler Jasprit Bumrah. Ashwin is currently placed at the ninth spot and he is the only spinner in the top 10 bowlers listed by the ICC.

There was also change in rankings for batsmen as Australia’s number three Marlas Labuschagne was placed number four 839 points having scored 47 and 6 in the two innings of the Adelaide test.

India captain and batting mainstay Virat Kohli finished a cricketing year without scoring a century across formats for the first time since 2008, but he gained two points following his earnings of 74 in the first mix. The Australian batting mainstay in Steve Smith, who scored a grand total of two runs in the Test so him losing as many as 10 rating points, which in a way narrowed the gap between the top placed Australian batsmen and India’s Kohli.

Australian captain Tim Paine, who scored a fine 73 not out in the first innings, rose to his career-best 33rd place while opening batsman Joe Burns rose to the 48th spot with his unbeaten 51 and Australia’s chase on the third day of the Test.