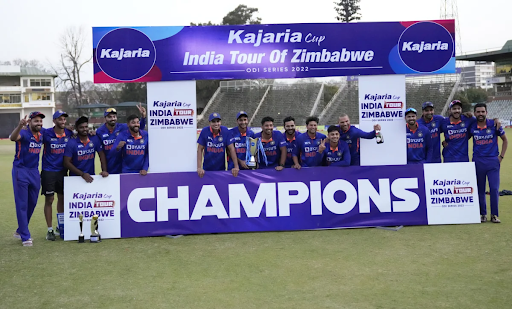 Shubman Gill scored his maiden ODI century for India whereas Sikandar Raza responded with a brilliant hundred of his own but the visiting side recorded a victory in the third and final ODI on Monday to complete a 3-0 clean sweep over Zimbabwe at the Harare Sports Club.

After Shubman Gill scored a brilliant 130 from just 97 balls with 15 boundaries and 1 six to power India to a strong total of 288/8 in their 50 overs, Sikandar Raza left the reply for Zimbabwe with a stunning century, smacking 115 from 95 balls with the help of 9 fours and 3 sixes but his side eventually finished short.

Chasing a stiff target of 292 win, Sikandar Raza did not find any support from the other Zimbabwe batsmen but the home team still scored a commendable 276 from 49.3 overs before losing their third and final consecutive ODI match to India, who had sent over a second string side led by wicket-keeper batsman KL Rahul.

It was a strong performance from India’s top order batsmen that laid the platform for an impressive victory. The vice captain for the tour, Shikhar Dhawan scored 40 from 68 balls whereas stand-in captain KL Rahul made 30 from 46 balls in what turned out to be his first significant outing after returning from a long injury layoff which also saw him battling against the coronavirus.

Shubman Gill was the star of the Indian batting show on Monday in the third and final ODI as he finally got past the triple figure mark which had proven elusive for the right-handed top order batsman so far and his fledgling career. Also impressive was another wicketkeeper-batsman in the side – Sanju Samson kept wickets – Ishan Kishan, who was run out after scoring 50 from 61 balls with the help of six hits to the fence.

Once again Zimbabwe used as many as seven different bowling options but it was Brad Evans who was the pick among the bowlers for the home side, returning with impressive numbers of 10-0-54-5. Among the other wicket-takers were Victor Nyuachi and Luke Jongwe, who claimed one wicket apiece.

The Zimbabwean side once again made an ordinary start with the bat with Innocent Kala being dismissed early on by Deepak Chahar for 6, Takudzwanashe Kaitano scoring 13, Sean Williams making an important 46-ball 45 while Tony Munyonga managing 15.

It was Sikandar Raza at No 5 for Zimbabwe who played a stunning knock as his century gave the inexperienced side a real chance to win against a power-packed Indian team, who eventually got past the challenge and recorded a series clean sweep.

For India, Avesh Khan took 3/66 from his 9.3 overs whereas usually disciplined Deepak Chahar was expensive, giving away 75 runs in his 10 overs for just two wickets. Chinaman bowler Kuldeep Yadav was the pick among the Indians with a fine spell of 10-0-38-2.